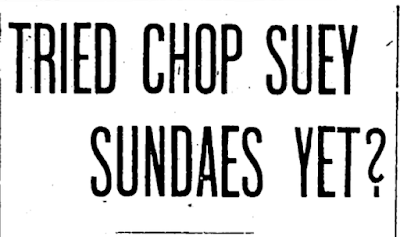 Well have you? When I asked this question on social media, almost no one seemed to have even heard of a Chop Suey Sundae. Some people thought I was joking, that such a thing couldn't exist. I was serious though, and once I explain the nature of this "Sundae," I think people will be seeking it out, or try to make it at home.

The drink version was invented first, in 1903, but by 1904, the second version had appeared. And both versions could be found all across the country. The Chop Suey Sunday also has existed throughout the 20th century, and you can even find recipes for it in newspapers from the early 21st century. So maybe it's time for you to try one. 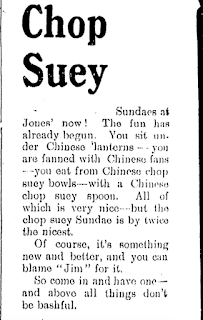 The Milwaukee Journal (WI), June 19, 1903, had an ad that mentioned the Chop Suey Sundae, but didn't describe it. There was another brief mention in the Manhattan Mercury (KS), July 15, 1903, noting, “Try a Chop Suey Sundae at Manhattan Candy Kitchen.”

The first description of the sundae was provided in the Plain Dealer (OH), July 26, 1903, which discussed an article about Chicago. The article stated that the “Chop suey sundae is a great favorite,…it has absolutely none of the ingredients in the Chinese preparation from which it takes its name nor is it eaten with a chopstick. It is a combination of dates, figs and nuts all flavored with a special mixture of syrups and ices.” It was essentially a soda fountain drink, and a new fad that quickly spread across the entire country.

More detail was given in the Indianapolis Journal (IN), August 2, 1903, quoting an article from the Kansas City Journal. It stated, “The ingredients of the real chop suey of Chinatown are not used in the chop suey sundae. The drink gets its name because it resembles chop suey in hue. It is, in fact, black—black as midnight. It might be called a nocturne.” The writer watched as his server “...mixed together dates, figs, chocolate and soda water” and then commented that “The drink, when it was finished, looked like some sort of effervescent ink.”

As Chop Suey was such a hugely popular dish during this time period, the term was apparently used to entice people to try the new soda fountain drink. And its very loose connection, a shared color, was sufficient for many to use the term.

Trying to firm up a connection, the Daily Chronicle, August 6, 1903, published an ad for Brown’s Drug Store, noting that "every lady" who bought a Chop Suey Sundae would receive a free pair of “Genuine Chinese Chop Sticks.” You obviously couldn't use the chop sticks for the fountain drink, so they were intended only to capitalize on the popularity of the Chop Suey dish.

The Macksville Enterprise (KS), August 7, 1903, quoting from a Chicago article, mentioned that, “Every season something new in this line is introduced. This year the chop suey sundae is one of the new ones that has proven popular. Its name belies its contents, as it is but a mixture of dates, figs and notes, flavored with sirups and ices.”

How much did a Chop Suey Sundae cost? The Fitchburg Sentinel, September 9, 1903, noted that a local druggist sold them for 10 cents. And ads from other places across the country generally sold them for the same price. 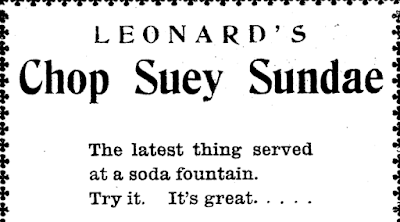 The Elkhart Truth (IN), May 5, 1904, published an ad for Leonard’s Soda Menu, noting that the Chop Suey Sundae cost 10 cents.

A different version appears. The first newspaper reference I found referring to the Chop Suey Sundae as more of an actual sundae, as we now know it, and not a fountain drink was in The Cleveland Leader, (OH), August 7, 1904. It stated, “Chop suey sundaes are perhaps enjoying the widest popularity of all of the new aspirants for public favor in the ice cream line. One of these sundaes is made by filling a glass with ice cream, pouring over the cream a syrup made of dates, figs, and maple syrup, and topping the whole with a sprinkling of chopped nuts.” Essentially, the fruit and nut mixture that would have gone into the fountain drink was made into a sauce and put atop ice cream as a topping. 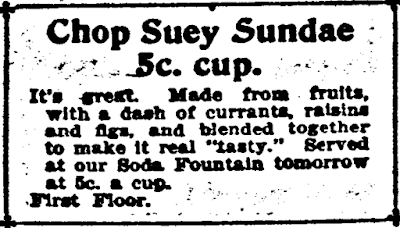 Over the years, both versions would continue to co-exist, although the sundae style would eventually be more dominant. The Evening Star (DC), August 17, 1906, still made the fountain style, from fruits with a dash of currants, raisins and figs, all blended together, and selling for 5 cents a cup.

Another, and even fancier fountain drink, was listed in the Detroit Times (MI), January 20, 1910, in an ad for Crowley, Milner & Co.  They used 8 different kinds of crushed fruit, with walnuts, almonds, pecans and filberts, all diluted with pure maple syrup. Though it regularly cost 10 cents, it was offered as a special for only 5 cents.

The National Soda Fountain Guide (1913), by William S. Adkins, is a fascinating book about the operation of a Soda Fountain, and contains some information about the making of a Chop Suey Sundae. It states, "As the name indicates, these constitute various mixtures. Chopped dates, figs, and raisins make a good Chop Suey combination. Place a scoop of ice cream in a cup and sprinkle it with the chopped fruit. Or mix the chopped fruits with a heavy syrup and pour over the ice cream." It then continued, "Chopped fruits are apt to get sticky and will work better with the addition of syrup. Chopped nuts of all sorts may be added to the Chop Suey mixtures; also sliced pineapple, candied fruits, shredded cocoanut, preserved ginger, and almost any confection of this sort you care to use."

The book also gives instructions on how to make a Chop Suey Double Sundae. "Take raisins, dates and figs, in equal quantities, chop them and mix with enough simple syrup of a heavy grade to permit the mixture to pour easily. This is the chop suey mixture." After making this mixture, "Now place any two desired kinds of ice cream in the usual mounds on the serving dish. Pour a small ladle of the chop suey mixture in the space between the two mounds of ice cream. Top with a whole cherry or with a whole berry in season. Prepared cocoanut ay also be introduced into the chop suey mixture, and a little candied ginger is added by some dispensers."

There was a variation, the Nut Chop Suey Double Sundae which basically added nuts instead of raisins. Plus, there were recipes for a Chop Suey Mouuse and a Chop Suey Parfait. I've seen a number of online articles which have claimed that this book contained a Chow Suey Sundae recipe that included the use of Chow Mein noodles. After scrutinizing all of the recipes in this book, I can positively state that it doesn't contain such a recipe. And Chow Mein noodles are not mentioned a single time in the book. There are soda fountains that made Chop Suey Sundaes with Chow Mein noodles but this book wasn't their source, and it was rare during the first half of the 20th century. 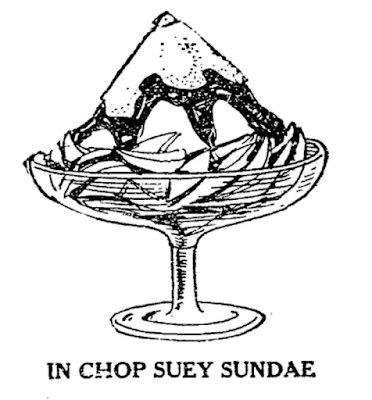 The Rockford Republic (IL), July 16, 1919, in an advertisement for Allen's Ice Cream, provided a nice drawing of their Chop Suey Sundae.

As a variation, the Lake County Times (IN), November 29, 1919, published an ad for the Summers Pharmacy and their Soda Fountain, noting they sold a Hot Chop Suey Sundae, where the fruit and nuts "dressing" was hot. This was the only mention I found of a hot version. 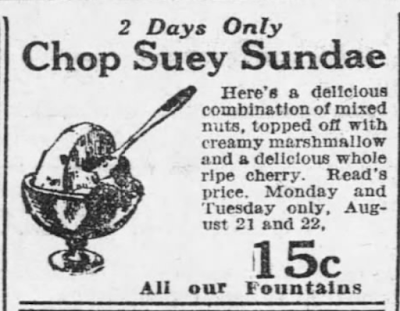 Another drawing of a Chop Suey Sundae was in the Baltimore Sun (MD), August 20, 1922. This seems different as the only fruit mentioned was a single cherry, and it was topped by marshmallow. This sundae also sold for 15 cents. 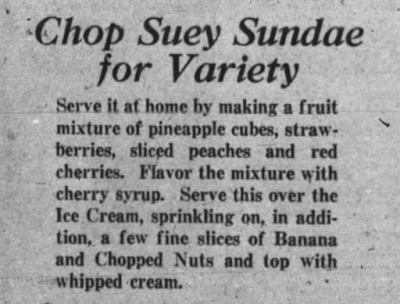 Want to make a Chop Suey Sundae at home? The St Joseph Gazette (MO), April 26, 1924, offered a simple recipe. It isn't too similar to some of the other sundaes, and is more akin to a Banana Split. 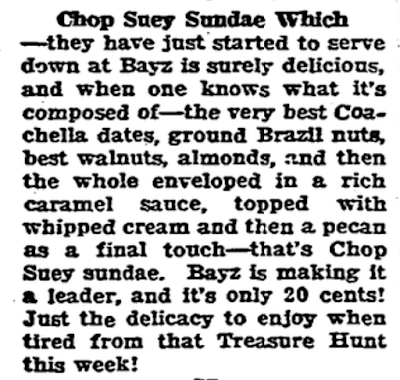 And there was another new version in the Riverside Daily Press (CA), February 21, 1928, more similar to some of the earlier versions.

If you want other Chop Suey Sundae recipes, a quick Google search will find plenty. And now that you know what it is, I suspect you'd like to eat one. I'm most curious about the fountain style sundae and may try to make one sometime in the future, when things get more normal again.

(FYI: This is NOT an April Fool's prank post!)
Posted by Richard Auffrey at 2:30 AM