Origins Of The St. Paul Sandwich: A Missouri Invention? 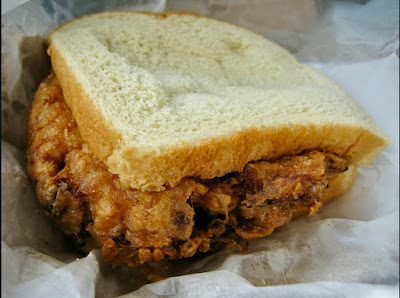 (This photo of a St. Paul sandwich is courtesy of Mark, aka GastroPublico)

If you've visited some of the Chinese-American restaurants in St. Louis, Missouri, or some other Missouri cities, you might have eaten a St. Paul Sandwich. It's said to be rare to find them available outside of Missouri. The origins of this sandwich are murky, and in an article in the St. Louis Post-Dispatch (MO), September 24, 1990, they stated, "We've heard of St. Paul sandwiches, but we never understood exactly why they're called that or why they're considered a St. Louis specialty." The article also quoted Real American Food, by Jane & Michael Stern, that, "The mystery is that no Louisian seems to know how St. Paul's got their name. Why aren't they called St. Louises?"

It's certainly interesting that in 1990, a major newspaper in Missouri had no information about the origins of the St. Paul Sandwich. Eventually, a potential origin tale arose, which now seems to be the most commonly shared legend about this intriguing sandwich. It's claimed that the sandwich was invented by Steven Yuen at Park Chop Suey in St. Louis. It's further alleged that Yuen named the sandwich after his hometown of St. Paul, Minnesota. The alleged date of its origin varies, ranging from the 1940s to the 1970s. However, is this legend true, and if so, is there proof?

When and where did the St. Paul sandwich originate? And is it only a regional Missouri dish?

Very soon after I started researching this sandwich, I was surprised to find a mention of a St. Paul sandwich from 1903! None of the background articles I'd read had even suggested the sandwich, by that name, was that old. And if so, Steven Yuen definitely didn't invent or name the sandwich. I was convinced to conduct a deeper delve into the origins of this sandwich, to ascertain what I could learn about its origins.

The first reference I found mentioning the St. Paul sandwich, and not surprisingly, was in The Appeal (St. Paul, MN), October 17, 1903. There was an ad for Mills' Sandwich room, and it was suggested you get "the new and popular St. Paul sandwich." So, it looks like the sandwich was invented around that time period and likely was named after the city. However, the article didn't describe the sandwich. A later issue of The Appeal (MN), April 29, 1905, published an ad for J.S. Mills’ Lunch & Sandwich Room, mentioning that a St. Paul sandwich cost 10 cents.

Who would have suspected the St. Paul sandwich extended back to 1903? However, we still need more information as this initial article didn't describe the nature of this sandwich.

It wouldn't be until 1913 that I found a description of the sandwich. The Evening Herald (KS), December 9, 1913, stated, “Egg sandwiches are ten cents in most places where they have been five although some have charged ten for several months. Ham-and-egg sandwiches bring fifteen pennies from that over-drawn purse. A St. Paul sandwich, made of ham, eggs and sometimes onions, is also drawing down the sum of three nickels.” The St. Louis Post-Dispatch (MO), March 4, 1916, also provided a brief recipe for the sandwich, “Scramble eggs in bowl; chop ham fine; add onions and parsley.”

There were other similar sandwiches to the original St. Paul's Sandwich, some which just were alternative names based on geography, and others which were slight variations on the ingredients. Some of these alternate names include the Denver Sandwich, Western Sandwich, and Manhattan Sandwich.

The first, and brief, mention I found for the Denver Sandwich was in the Sioux City Journal (IA), May 5, 1901. The first references to the Western Sandwich were in the Poultney Journal (VT), April 22, 1904, which had an ad for a new lunch room that sold the Western Sandwich for 10 cents, and the North Adams Transcript (MA), December 15, 1904, which had an ad mentioning the “Western Egg Sandwich.”

The Janesville Daily Gazette (WI), December 9, 1909, had the first mention of a Manhattan Sandwich, where it was listed on a restaurant menu which also included the Denver Sandwich, so we can see those two sandwiches were different in some respect. The previously mentioned Appeal (MN), April 29, 1905, also presented a menu listing a St. Paul sandwich as well as a Denver Sandwich, also for 10 cents. A number of other menus in newspapers over the course of a number of years, would feature both of these sandwiches.

However, what were the fillings in these sandwiches? And which were just synonyms for the same sandwich?

The St. Louis Post-Dispatch (MO), April 28, 1919, noted that “a St. Paul Sandwich which is composed principally of ham and eggs.” The South Bend Tribune (IN), June 9, 1922, stated that the Manhattan Sandwich had a fried egg, minced ham, and onion.

So, we're actually left with somewhat of a confusing situation, one that acquired some resolution in later years, though some confusion would remain. In short, it seems that the Western, Manhattan and St. Paul sandwiches were essentially the same, with the Denver sandwich being slightly different, and that difference later appeared to be the addition of green peppers to the sandwich. However, the lines between these four sandwiches is blurry, and there are exceptions found. These sandwiches also were known all across the country.

More blurred lines. The Algona Upper Des Moines (IA), September 3, 1940, published, “If you order a Denver sandwich you get egg, onion, chopped meat…if you order a St. Paul sandwich, you get the same thing but with green pepper instead of onion…if the cook likes you, maybe you’ll get both onions and green peppers.” And then the Amarillo Daily News (TX), June 9, 1950, noted that, "A sandwich made of scrambled eggs mixed with chopped-up ham and green peppers is known as a Denver or St. Paul sandwich. There’s a slight difference. You add onions to one. The question is, which one.” It all seems to depend on where you order your sandwich.

So, how did the original St. Paul sandwich evolve into an egg foo young sandwich?

There doesn't appear to be much information readily found online about Steven Yuen of Park Chop Suey. The Riverfront Times, November 15, 2006, indicated that Yuen opened his restaurant in the mid-1970s, which seems to indicate his version of the St. Paul sandwich wasn't invented prior to that time. And if it existed before the opening of his restaurant, then he wasn't the inventor. Further research provided a clearer answer to this matter.

In the Indianapolis Star (IN), June 24, 1962, there was an article about recent changes at The Lantern restaurant, which was owned by the Chung family. Their menu included an Egg Foo Young Sandwich for 40 cents. This was the earliest mention of such a sandwich I was able to find, and obviously predates any sandwich Yuen might have created in the 1970s. The Indianapolis Star (IN), April 21, 1963, also mentioned a restaurant, the China Palace, which served an Egg Foo Young Sandwich. Their sandwich was served open-faced on bread and topped by gravy.

A recipe appeared! The Arkansas Democrat (AR), July 18, 1963 and the Pittsburgh Post-Gazette (PA), August 1, 1963, presented the same recipe for "Oriental Egg and Shrimp Sandwiches," an "Americanized version of the famous Chinese dish, Egg Foo Young." Basically, you make an omelet similar to Egg Foo Young, which is placed onto a hamburger bun, to which is added tomato slices, watercress and soy sauce. An Egg Foo Young sandwich!

The Green Bay Press-Gazette (WI), August 7, 1963, published the same recipe but added some introductory information lacking in the other article. One of the most interesting bits is that this is a low-calorie recipe, about 235 per serving. Both the Daily Journal (NJ), August 28, 1963, and Clarion-Ledger (MS), September 5, 1963, repeated the information from the Green Bay newspaper. During the early 1960s, the idea of an Egg Foo Young sandwich appeared across the country, from Arkansas to Wisconsin, Missouri to Pennsylvania. 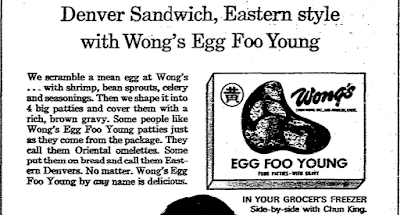 Wong's Chinese Frozen foods appeared to have been around since at least 1950, and one of their products was frozen Egg Foo Young. The San Diego Union (CA), January 8, 1964, presented one of Wong's ads, explaining how their frozen Egg Foo Young could be used to create an "Eastern Denver" sandwich, simply placing the patties between a couple slices of bread. The Battle Creek Enquirer (MI), June 9, 1966, also noted a restaurant selling a Hot Egg Foo Young Sandwich, with gravy, for 65 cents.

Clearly, Yuen wasn't the first to put egg foo young between two slices of bread to make a sandwich. At best, he might have been the first to add mayo, lettuce, tomato, and pickles to his sandwich, a minor variation to a pre-existing sandwich idea. His version simply became very popular in Missouri and acquired a legend all its own, ignoring all of the history that came before.

Plus, it seems probable that Yuen adopted the name, St. Paul Sandwich, from the long-existing "omelette" sandwich, rather than naming it after his hometown. It just happened to be a happy coincidence Yuen was from St. Paul. I'll also note that the claims about Yuen being the inventor and namer of the St. Paul sandwich all come from at least second-hand sources. I haven't found any sources that directly quoted Yuen about the invention. He might never had made such a claim. It might have been those around him who created the myth around Yuen and the St. Paul sandwich.

So, do you want to enjoy a St. Paul Sandwich now?
Posted by Richard Auffrey at 12:46 AM