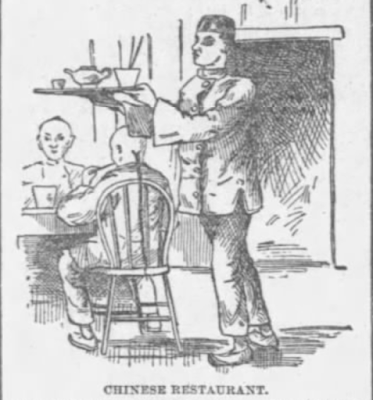 Where were the first Chinese restaurants located? When did they first open? Did they have difficulties in the cities and towns where they were situated? What are their stories?

I've previously written an extensive five-part series, The First Restaurants In Boston's Chinatown, and a seven-part series, The First Chinese Restaurants Outside Boston. The second series expanded my coverage from Boston to a number of other cities and towns in Massachusetts, from Cambridge to North Adams, Malden to Quincy. I'm now expanding my coverage outside of Massachusetts, to cover various city and towns in Connecticut.

We begin our examination of Connecticut's history back in the last few months of 1816, when the Foreign Mission School was established in Cornwall, Connecticut. This school opened in May 1817, and its objective was to bring Christianity and basic education to youths from all across the world, from Hawaii to India. During its second year of operation, their class included two Chinese youths. The school lasted until 1826, and it taught a total of five Chinese youths.

Backtracking for a moment, I previously noted in another article that in 1847, three Chinese boys,  named Yung Wing, Wong Shing, and Wong Fun, were brought to Massachusetts, to the Springfield region, to attend school. Yung Wing then attended Yale College, and the Boston Investigator, May 19, 1852 mentioned that “At the annual exhibition of the junior class at Yale College last month, the highest prize for English composition was awarded to Yung Wing, a native Chinese.” It was obvious that Yung was doing very well at Yale, especially for someone who wasn't a native English speaker. Then, the Springfield Republican, September 30, 1854, noted that Yung had just graduated from Yale college with the highest honors. He was probably the first Chinese student to graduate from an American college and excellent in his studies.

Yung eventually returned to China, but made plans to return to America, and when he did, he brough a number of other Chinese students with him. The Congregationalist, November 16, 1871, reported that China was willing to send 120 students, over the course of several years, to America for education. A number of those Chinese students attended school in various spots within Connecticut.

Yung's own ties to Connecticut grew. The Springfield Republican, February 26, 1875, provided the good news that Yung had gotten married to Mary L. Kellogg, a white woman, in Connecticut, and they settled in Hartford. Unfortunately, eleven years later, tragedy struck. The Boston Herald, May 30, 1886, reported that Mary, who was only 35 years old, died of consumption at their home in Hartford. They had two sons, who now Yung had to raise on his own.

As some point, Yung returned to China for a time, although he came back to live once again in Hartford. The Boston Herald, February 28, 1909, mentioned that Yung visited Yale to celebrate the 55th anniversary of his graduating class, of which only 25 people were still alive. A few years later, the Springfield Republican, April 22, 1912, sadly reported that Yung Wing, at age 84, had died at his home in Hartford.

Yale University (known as Yale College until 1887) and its Library, was "the first academic institution in the United States to collect Chinese books." Back in 1849, the library acquired, "Six titles of traditional stitch-bound Chinese texts." The Library's website also indicates, "The early acquisitions of Chinese books were mainly arranged for the Yale Library by missionary printer, scholar, and diplomat Samuel Wells Williams (1812-1884), who was Yale’s inaugural professor of Chinese language and literature." In addition, the previously mentioned Yung Wing "gave his personal library to his alma mater." Plus, Yung's "major donations in 1878 and 1911 laid the foundation of the Chinese collection."

In 1901, the Yale-China Association was established, whose mission was to bridge "American and Chinese cultures by creating lasting, transformative partnerships and experiences in education, health, and the arts." It also seeks to promote "understanding between Chinese and American people through programs in the arts, education, health, and public service." Very positive benefits for the Chinese community.

So now, let's begin a more city-specific examination of the early Chinese restaurants in Connecticut, starting with New Haven.

At least during the 1880s, it seems that a small population of Chinese lived in New Haven, though their origins extended back to the 1870s. In 1873, Unite L. Frank opened a tea company on Congress Avenue in New Haven. The Morning Journal & Courier, August 6, 1887, noted that Unite married Leona L. Wilburn of Alexandria, Virginia. At that point in time, there was a small community of Chinese in the area.

The Morning Journal-Courier, November 19, 1888, reported that 19 Chinese had been arrested in a police raid at a “little one story shanty at 49 Crown street, next to Joe Elley’s.” There had been a Chinese laundry once at that address, owned by Up Foon, who had decided to turn the location into a gambling hall. Sunday was their busiest night, and when the police arrived, they found gambling occurring in both rooms of the building, Chinese playing a dominos game. Two Chinese were able to escape, and the rest were bonded out, at $25 each, by Charles Toon, a tea merchant located at Congress Avenue.

However, there was some clarification on Charles Toon in the Morning Journal & Courier, April 8, 1891. Charles Bon Toon, had been arrested for “making change with a $50 bank note of the Yale Business college,” though he claimed it had been part of a joke. The article then mentioned that  Toon had once clerked for U.S. Frank, a tea dealer on Congress Avenue, but hadn't worked there for some time. Obviously the article referred to Unite Frank.

There was then a brief legal notice in the Morning Journal & Courier, April 5, 1895, noting that the firm of Frank and Moy Tea Company had been dissolved. Frank would continue the business though, which was located at 26 Congress Street. This was the first mention of "Moy Tea" that I found, and it appears they might have been more of a silent partner. Frank would continue the business at least into 1904. The Morning Journal & Courier, May 13, 1904, noted that the Unite L. Frank Tea company, which sold tea, coffee, and spices, had moved to 38 Congress Avenue, a few doors above the old stand.

Another gambling raid! The Morning Journal-Courier, October 28, 1895, stated that the Chinese Joss house at 76 Fair Street had been raided by the police. The Joss house had a huge door, fastened by six massive locks, and it took the police several minutes to break down the door. Inside, they found Chinese playing fan tan, and they arrested 31. Most of the locals who were arrested ran laundries, while others arrested came from New York and other Connecticut cities and towns. It was also noted that a prior raid, on March 25, 1895, had resulted in $266 in fines.

The first Chinese restaurant in New Haven, and likely the first one in all of Connecticut, opened in 1897. The New Haven Register, October 28, 1897, noted that this restaurant would be established, and managed, by Sing Lee, a protégé of Coroner Mix, on Crown Street in a few days. Curiously, the New Haven Register, November 19, 1897, mentioned that this new Chinese restaurant wasn't catering to the Irish trade. Why was this the case? Was this a larger issue affecting other New Haven restaurant too? Unfortunately, very little information was provided so the answers remain elusive for now.

However, only about three months after opening, the restaurant chose to close. The Morning Journal-Courier, February 2, 1898, reported that the Chinese restaurant had just closed. Even though the food and service had been good, the owners decided there hadn't been enough customers to justify remaining open. Three months certainly wasn't a long time to properly assess whether a restaurant would survive or not, but the closing might have been spurred on by other plans. The Connecticut Western News, February 10, 1898, reported that the Hong, Chum, Low & Co., which owned the Crown Street restaurant had plans to move their restaurant to Hartford.

Chinese New Year. The New Haven Register, February 11, 1899, mentioned how the Chinese commonly celebrated their New Year, but that, “In New Haven the celebration of New Year’s is rather tame, being confined almost exclusively to exchanging calls and eating good things.” This is likely because there were so few Chinese in Hartford, so they didn't have a sufficient amount for a more lavish celebration.

A second Chinese restaurant opened in 1900. The New Haven Register, September 21, 1900, published an ad for a Chinese restaurant, located at 136 Orange Street, serving all types of Chinese and American cooking. The ad also noted, "Best tea is served." Curiously, an almost exact advertisement was published in the New Haven Register, December 15, 1900, but it had a different address, now using 104 Crown Street, a couple blocks away from the previous address. No reason is given for the move, or any indication that the original address might have been an error.

Additional Chinese restaurants would open during the next several years, though most of the references failed to actually provide the name of the restaurants. The Morning Journal-Courier, July 28, 1902, stated that Chin Lee, the restaurant keeper of 156 Meadow Street, was arraigned for serving liquor on Sunday. During the previous year, the restaurant had been the subject of many complaints about liquor being served there at all hours. The Morning Journal-Courier (CT), August 6, 1902, then noted Chin was fined $10 plus costs for the offense. Apparently, this restaurant had been open since at least 1901.

Another restaurant. The Morning Journal-Courier, August 25, 1905, reported that Chin Sam, an importer and the owner of a Chinese restaurant on South Main Street, became a father. His Chinese wife gave birth to a daughter, and it was thought to be the first child born to Chinese parents in Connecticut. 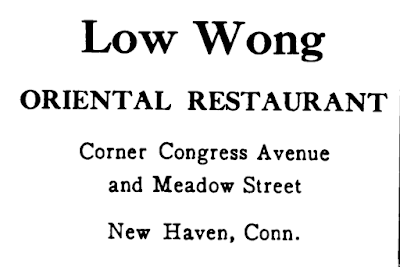 In The Chinese Students Monthly, January 1909, there was an ad for the Low Wong Oriental Restaurant, at the corner of Congress Avenue and Meadow Street.

There was also a fight at this restaurant. The Morning Journal-Courier, September 25, 1908, reported that the owner was married to a white woman, who worked as a waitress at the restaurant. A couple were loudly singing and shouting during dinner, and refused to stop when requested. The owner's wife then refused to wait on them, and the couple was made to leave. A crowd, consisting of many students, was outside the restaurant and a bit of a melee began. Someone threw a chair and struck the owner in the head, who then grabbed an axe and tried to strike someone. Despite all this, the incident didn't attract much attention and no one was arrested.

In The Chinese Students Monthly, November 1919, there was an ad for for The Far East, an American and Chinese restaurant located in New Haven, though no street address was provided. They offered a Noon Lunch, from 11am-2pm, for 45 cents. They also offered a Strong Orchestra on Sundays and evenings. There was also an ad for the Tien Tsin, a Chinese restaurant at 793 Chapel Street, and the ad stated, "Old Form But Odd Music."

The Connecticut Labor News, September 23, 1921, also printed a brief ad for The Far East, an American and Chinese restaurant located at 67 Church Street. They offered a luncheon for 45 cents and a Special Dinner for $1.00. This restaurant remained in existence at least until July 1923.

Unfortunately, most of the New Haven newspapers during this period didn't provide sufficient information about these early Chinese restaurants, only some tantalizing and brief references. Maybe I'll find more information in my future research.