The First Restaurants In Boston's Chinatown: The Tale of Mary Yick (Part 7) 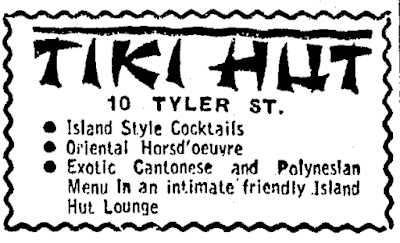 From restaurant owner to blackjack dealer, from Tiki to discrimination. Like Ruby Foo and Anita Chue, Mary Yick was another pioneering women in the Chinatown restaurant industry, owning the Tiki Hut restaurant on Tyler Street. Unfortunately, there was much less available information about Mary Yick than the other two women, so this article is much shorter than the previous two.

Mary Yick was born on November 3, 1933, and made her first appearance in a local newspaper in November 1939. At age 6, she and two other young Chinese girls, were photographed walking in a parade in Chinatown, part of the first rice bowl party for war relief work in China. This was one of the largest celebrations in Chinatown at the time, garnering about 30,000 visitors.

In October 1943: Mary, and 3 other Chinese children, were photographed as they distributed pedestrian safety booklets on the Traffic Day of Boston’s Smash the 7th Column Campaign. The 7th column referred to "carelessness" and this campaign was intended to reduce accidental death and injury. Mary's involvement in these community causes echoes Anita Chue's own involvement when she was young.

When Mary was 17 years old, in October 1951, she was once again shown in a photograph in a local newspaper. Mary and eight other young Chinese women were shown in their costumes as hostesses during the dedication ceremonies for the new headquarters and community building of the Chinese Merchants Association at Kneeland and Hudson streets.

Once again, in April 1956, Mary made the newspapers, in a photograph and news article. The article discussed Otto Mammon who owned the Polynesian Village at Hotel Somerset. Otto came to Boston from San Francisco, and stated, “Our Polynesian and Cantonese food suits the Boston palate.” At his restaurant, they had huts which were replicas of those of Sumatra, Bali and Java. They also had solid wood table tops of rare Hawaiian Monkey Pod trees. In addition, the article published two recipes from Otto's recipe, including Lobster Pina and Flaming Polynesian Steak. In the accompanying photograph, Otto was shown teaching Mary Yick how to handle a lobster.

I couldn't determine whether Mary worked at the Polynesian Village or not, but it seems reasonable considering she would later open her own Cantonese and Polynesian restaurant. She might have learned some of her craft from Otto. Mary also might have worked at other Chinese restaurants in Chinatown though I couldn't anything to substantiate that possibility.

It's unclear the connection between DiNapoli and Yick, and whether Yick was involved in Lanai, Inc. prior to November 1961. What we do know, is that this was the establishment of Yick's famed restaurant, The Tiki Hut.

One of the first newspaper references to the Tiki Hut wasn't until September 13, 1963, noting that the Tiki Hut was a cocktail lounge, specializing in creative Cantonese cuisine. It was also mentioned that Hostess Mary Yick was “one of Boston nicest people.” Another article, in March 1965, recommended that you order a Tiki Tornado at the Tiki Hut, joking that, “Two of these, and even your wife looks like a friend.”

In November 1965, Suffolk Downs, the former horse racing track, held an event honoring its American-Chinese neighbors and the chairman of the event was Mary Yick.

An article in February 1970, noted how “The Tiki Hut is a favorite after-show stop for many theatrical people when they’re in town.” The article mentioned how Pearl Baily, her husband, drummer Louis Bellson, co-star Cab Calloway, and other cast members of “Hello Dolly” dined at The Tiki Hut. Many theatrical celebrities dined at the restaurant when they were in town, and some of those regulars included David Merrick, Angela Lansbury, and Shakespearean actor Nicol Williamson.

Like Ruby Foo's Den and the Cathay House, the Tiki Hut was a favorite of the stage and screen celebrities, as well as stars from the local sport teams, from the Celtics to the Bruins. It was even noted in an article in February 1971, that on the theatrical circuit, Mary Yick was affectionately known as “The Dragon Lady.”

Unfortunately, Mary and the Tiki Hut ran into a serious problem in mid-1971. The Boston Globe, June 2, 1971, noted that “Mary is the only remaining on-site female entrepreneur of a restaurant-lounge in Chinatown.” Ruby Foo had passed away twenty years before and Anita Chue no longer owned any restaurants. Mary was facing a possible ouster from her 10 Tyler Street location. The owner of the premises, the Lee On Dong Association, was attempting to conduct an “auction in the Chinese tradition of her lease.” Fortunately, Mary was able to secure an injunction to halt the auction until the owners could come forward and justify themselves to the court.

In her petition, Mary stated there had been an “alleged violation of her civil rights on the basis of discrimination because of her sex.” She was “Alleging a concerted course of action against women business functionaries in the restaurant field."  Her petition also claimed that Anita Chue, of Anita Chue’s restaurant in Brookline, had been removed from that restaurant by persons common to the group attempting to oust her. Mary also claimed those same individuals were responsible for ousting the female owner of the Bo Shek, a Chinatown coffee house on Beach Street. Finally, the petition noted that, “Traditionally, Chinese mores dictate that Chinese females are inferior to Chinese males, and that Chinese females should not be entrepreneurs or occupy any position other than that which calls for menial or household work.”

Mary and the Tiki Hut lasted only another year, though at least it seemed the lease ouster had been prevented, when in November 1972, she transferred the liquor license to Mai Lai Inc., managed by Kwok Man Yu, who would operate a restaurant at the same address. The Boston Globe, December 1, 1972, noted this loss in an article titled, “Chinatown loses its last Dragon Lady.” It referred to Mary Yick “of the lyrical voice and quick quips that (gently but plainly) put down amorous customers.” The article also stated, “Her departure ends, at least for the time, a tradition begun by the legendary Ruby Foo and later Anita Chue.”

After taking several trips to various parts of the world, Mary planned to move to Las Vegas, and an article from January 1981, noted that Mary was now a blackjack dealer at Caesar’s Palace in Las Vegas. Sadly, Mary passed away in Pleasanton, California, on July 14, 2013.

Once again, we have a Chinese woman who left a strong legacy in Chinatown. Like Ruby Foo and Anita Chue, Mary Yick was an intelligent, charming and savvy business woman who became a success in the restaurant industry, and introduced many people to the wonders of Chinese cuisine, especially Cantonese. Her restaurant career ended too shortly, potentially due to discrimination,  because she was a woman. A tragedy in its own right.


*********
You might also be interested in my other related historical articles about Chinatown, its restaurants, and related Chinese cuisine matters:

And also see my Compilation Post, with links to my additional articles about Chinese restaurants, outside Boston and in Connecticut, as well as a number of related matters.
(Update as of September 15, 2020: Lillian Lee, Mary's older sister, recently contacted me, providing a few more details about the life of Mary Yick).
Posted by Richard Auffrey at 3:00 AM