Origins Of The Chop Suey Sandwich: A New England Invention?

"The chop suey sandwich is a cheap and filling concoction of roast pork or chicken, onions, celery and bean sprouts cooked in a thickened soy gravy and served on a hamburger bun."
--New England Historical Society, "Salem Chop Suey Sandwiches, A Sign Of Summer"

If you've visited the Salem Willows, you might have enjoyed a Chop Suey Sandwich, likely at the Salem Lowe restaurant. Many sources claim that this sandwich is unique to New England and parts of New York. However, these sources disagree as to when this sandwich was invented. For example, the New England Historical Society alleges it extends back to the Salem Willows in 1905, which seems unlikely, especially as Salem Lowe wouldn't exist until around 1912.

According to Sweet and Sour: Life in Chinese Family Restaurants, by John Jung, "In parts of New England, many lunch counters, drugstores, five-and-dimes, and amusement parks offered a variant known as the chop suey sandwich as early as the 1920s. Its heyday was in the 1930s and 1940s, and it was also popular in the New York City area." This sounds more likely, though no evidence was provided to support the claim.

And anthology professor, Imogene I. Lim, and John Eng-Wong, in their article, “The Chow Mein Sandwich: Chinese American Entrepreneurship in Rhode Island,” placed the likely place of origin of the chop suey sandwich in Fall River, also noting that its heyday was in the 1930s and 1940s. A definitive origin date for the sandwich wasn't provided.

So, when and where did the Chop Suey sandwich originate? And is it only a regional New England dish?

I haven't seen sufficient documentary evidence from any of the sources which have alleged Salem, Massachusetts was the origin of the sandwich. Those sources also haven't offered sufficient evidence of the possible year of origin. Lots of assertions without proof. These sources also all seem to have concentrated on New England as the source of origin, with no consideration to the rest of the country. Initially, it seems to me that this might be a case of another food origin myth, where the origin tale, which isn't true, has become "common knowledge," accepted by the masses without question.

I decided to conduct some of my own research, and what I've found seems to indicate the chop suey sandwich isn't isolated to New England and parts of New York. The sandwich can be found all around the country, from Florida to California, Arkansas to Michigan. This brings to mind my previous article, The Origins of American Chop Suey, a so-called "regional New England" dish which actually had origins all across the country.

One of the first references to this sandwich I found wasn't in New England at all, and was actually on the other side of the country. The Long Beach Telegram (CA), January 30, 1912, published an article which discussed the opening of a new Masonic club. The club had its own dining room and one of the dishes that they served was a Chop Suey Sandwich. Unfortunately, no details of the sandwich were provided, but we know the concept of this sandwich was known in California at least as far back as 1912. Potentially, this could predate the concept of the sandwich in both Salem and Fall River.

If the chop suey sandwich had originated in Salem and/or Fall River before this time, it would be quite surprising that its fame had spread across the country by 1912. It is far more probable that someone in California had a similar idea, separate from what was occurring in Massachusetts.

The Press and Sun-Bulletin (NY), April 7, 1914, made a brief mention of the chop suey sandwich, using the term in an analogy, thus indicating it was also known to New Yorkers at this point.

Another New York reference. The Brooklyn Daily Eagle (NY), July 31, 1924, published an article about the Coney Island Boardwalk, titled “Try Chop Suey Sandwich In Cosmopolitan Luncheon On Coney’s Boardwalk.” Curiously, most of the article had nothing to do with the chop suey sandwich. There was a brief reference to a Chinese stand, located on the Boardwalk, selling a Chop Suey Sandwich. Once again, no details about the sandwich were provided but the author of the article obviously enjoyed it.

During the late 1920s, there were other advertisements, around the country, mentioning chop suey sandwiches. The Hagerstown Daily Mail (MD), February 6, 1928, had an ad for Mackenzie’s Luncheonette Dept, mentioning they sold a “Hot Chop Suey Sandwich on Toast and a pot of tea” for 30 cents. The Tampa Tribune (FL), July 20, 1929, published an ad for Tampa’s Public Market, noting that one of the stalls for Mrs. Moore’s Restaurant sold a Chop Suey Sandwich for 5 cents. The Journal Gazette (IL), July 23, 1929, also had a brief mention of a Chop Suey Sandwich as a special in the Coffee Shop of the Hotel U.S. Grant.

Chop suey sandwiches in Maryland, Florida and Illinois! The idea certainly wasn't restricted to New England by any stretch. And these advertisements are all before the heyday of the sandwich during the 1930s and 1940s, before they became so popular that word might have spread across the country.

The News-Journal (OH), November 6, 1931, published an ad for the opening of the Shadow Inn, a new place to dine and dance, which stated, “Introducing the Chop Suey Sandwich The Latest Thing in Sandwiches.” It appears the sandwich was already a fad, and definitely not restricted to New England. The November 17, 1931 issue of this newspaper noted that the sandwich sold for 10 cents.

The Lowell Sun, December 18, 1931, presented an ad for Lee’s Shop Suey Lunch, which offered a Chop Suey Sandwich for 10 cents.

Onto Massachusetts. The Wellesley College News, April 21, 1932, had an for Liggetts, located at 539 Washington Street, Wellesley, mentioning that they recently added Luncheonette Service at their Soda Fountain. Their new menu included a Chop Suey Sandwich for 25 cents.

And then we journey back to the mid-west. The Battle Creek Enquirer (MI), May 14, 1933, reported that Yee Ling Nun and Charles Hem, local chop suey sandwich peddlers, were stopped by the police as they didn’t have a license to sell their sandwiches, The police told them to either obtain a license or shut down. 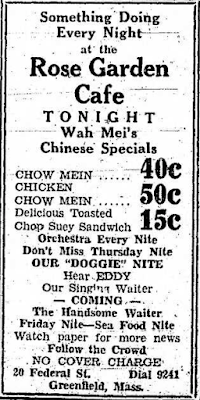 Arkansas? The Fayetteville Daily Democrat (AR), November 22, 1935, had a brief ad for the Kurtz-Moore Coffee Shop, which offered a Chop Suey Sandwich for 25 cents.

The Princeton Daily Princetonian (NJ), February 27, 1950, printed an ad for The Princeton Tea Garden, which noted, “After 9pm, try out Chow Mein Sandwich & Tea” for 35 cents. 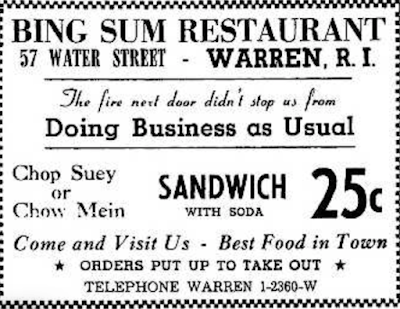 The Bristol Phoenix (RI), August 10, 1951, presented an ad for the Bing Sum Restaurant, which gave you an option of a Chop Suey or Chow Mein Sandwich with Soda for 25 cents.

After my research, I still don't have an answer as to the origin of the Chop Suey Sandwich, but the evidence is clear that this sandwich was known all across the country and wasn't restricted to New England. You could find the sandwich everywhere from Florida to California, Arkansas to Michigan. The sandwich might have multiple origins, in different places of the country. There are still plenty of unanswered questions, and more research is definitely warranted. I'd like to know more details about the nature of the Chop Suey Sandwiches served around the country. Were they similar to what was found in Salem and Fall River?

My search continues....
Posted by Richard Auffrey at 3:00 AM