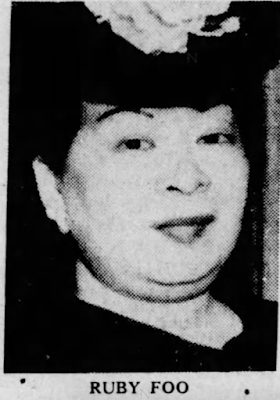 Around 1929, an enterprising and pioneering Chinese woman, Ruby Foo, seized an opportunity, thwarted norms, and opened a Chinese restaurant in Boston’s Chinatown. Her story is fascinating though unfortunately her life was far too short. Despite dying too early, Ruby made a significant impact, and her legacy is and should still be cherished.

At the time she opened her restaurant, there were about 3000 Chinese men in Chinatown and only 150 Chinese women. And nearly all of those women were home makers so it was revolutionary for Ruby Foo to open her own restaurant in such a male-dominated area. Ruby Foo's Den became immensely popular, especially with celebrities from all over the country. The restaurant also was likely one of the first Chinese spots to offer "take-out" food.

Ruby's tale is fascinating and her endeavors helped to define and shape Boston's Chinatown. I'm currently working on Part 2 of Ruby Foo's story, which should be published in the next issue Sampan, sometime later this month.

Support Sampan!
Posted by Richard Auffrey at 3:00 AM