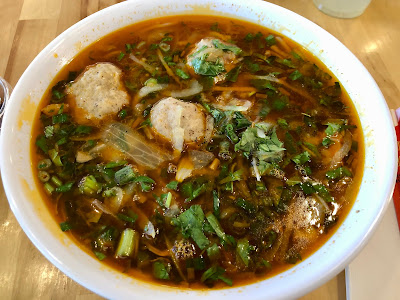 You're likely familiar with Vietnamese Phở, a compelling noodle soup, but there are other delicious soups made in Vietnam as well, such as Bún bò Huế, which basically translates as "Huế beef noodle soup." However, it's much more difficult to find Bún bò Huế, and there's no logical reason why it shouldn't be as popular as Phở.
Bún bò Huế originated in the city of Huế, which was made Vietnam’s capital in 1802 by the Nguyen Dynasty, and remained so until 1945. The city has a reputation for spicy foods, and Bún bò Huế is a spicy soup, generally made with both beef and pork, and commonly shrimp paste and congealed pork blood. Other common ingredients include lemongrass, banana blossoms, and herbs. The noodles are usually round, unlike the flatter noodles used in Phở.
The first American newspaper reference I found for Bún bò Huế was in the Los Angeles Times, October 27, 1983, in a review of the Vietnam Restaurant in San Diego. It mentioned that Bún bò Huế consisted of "rice stick noodles, beef and pork combined in a hot and spicy beef broth." It also noted that, "The noodles serve double duty by both adding bulk and lessening the effects of the hot seasoning."
A couple years later, the Philadelphia Inquirer, April 28, 1985, reviewed a Vietnamese restaurant in Philadelphia, noting, "Bun Bo Hue ($3) is a soup from the old royal city of Hue, a combination of thin white rice noodles, sliced beef, lemongrass, and lots and lots of hot pepper---not as various or as delicate as the other soups, but big-flavored and excellent, and a great favorite with the customers." References remained relatively uncommon throughout the rest of the 20th century.
Locally, the first reference in a Boston area newspaper was in the Boston Globe, October 9, 2003, which  briefly recommended the bun bo hue ("spicy beef soup") at the Pho Lemon restaurant in Cambridge. The Boston Globe, September 14, 2006, reviewed the Pho Yuen Dong in Quincy, and mentioned, "And bun bo Hue ($7.95), five-spiced beef brisket with udon noodles, is a revelation. In the bowl are many meat bits we'd be hard pressed to identify: some sort of pate, a knuckle, a chewy blob, a chewy strip, something gristly." The review continued, "The spicy broth tastes divinely of beef, in a clean rather than heavy way. The spices are intoxicating; There's a heady dose of lemongrass, followed by a tinge of star anise."
As I've said before, Việt Citron, in Burlington, is one of my regular lunch spots and I've previously reviewed the restaurant a couple times. They commonly offer seasonal specials, and I generally order these items, always ready to try something new. Recently, and only from Thursdays to Saturdays, pending availability, they have been offering Bún bò Huế ($15), also referred to as Hue Spicy Bang. I've never had this Vietnamese soup before so definitely had to try it. (And it's pictured at the top of this article.)

Their menu describes the dish as "Hue region aromatic spicy lemongrass beef noodle soup. Bun Bo Hue made with 24 hrs broth, rice udon noodles, topped with sliced beef shank & pork shoulder, homemade Cha Moc (pork paste). Comes with fresh veggies side of shredded banana blossom (bap chuoi) & cabbage, fresh herbs, beansprouts, lime, and w/ Mama Tran's Hue Chilli Sate." One of the owners, Tran Lee, mentioned that making this soup is even more labor intensive than making Phở.
The soup is aromatic, strong with lemongrass, but with beef notes as well. The taste of the broth is complex and intense, with strong umami elements and lots of beef flavor, enhanced with herbs. It was spicy, though not overly so, a pleasant burn that enhanced the dish. The thin and tender slices of beef shank generally had pieces of silky fat attached, and there were small, flavorful pork meatballs within the soup, a bit spongy in texture. The noodles were just the right texture, and helped to cut some of the spicy heat. You also receive a box of veggies with the soup to add or not, including some banana blossom, something new to me. It had an intriguing flaky texture to it.
As soon as the weather is cooler, the Bún bò Huế is going to be an excellent choice for lunch or dinner. It is different from Phở, being a bit heavier, but is still relatively light. The spice adds a compelling aspect to the soup and it's sure to warm your belly and please your palate. Việt Citron has created another delicious dish and if you've never dined there, you really need to rectify that situation immediately.
Posted by Richard Auffrey at 3:30 AM