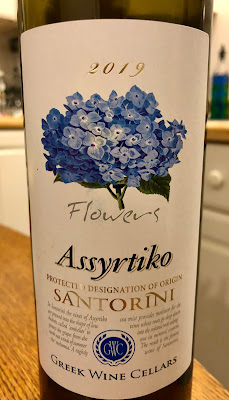 The Greek island of Santorini might have been the inspiration for the legend of Atlantis. About 3600 years ago, the island sustained an enormous volcanic eruption, which left a large caldera surrounded by volcanic ash deposits. The resulting tsunami may have contributed to the legend of the destruction of Atlantis by a great flood. Today, its volcanic soils contribute to the creation of many compelling wines.
One of Santorini's most famed grapes is Assyrtiko, a white grape thought to be indigenous to the island. Assyrtiko is commonly high in acidity, even when it's very ripe, with a prominent minerality and citrus flavors. It is used to make both dry and sweet wines, and pairs very well with a variety of seafood dishes. Although it might be seen as a summer wine, it certainly has its place during all of the other seasons, especially when you consider food pairings.
I recently received a media sample of an Assyrtiko from the Greek International Food Market. The 2019 Greek Wine Cellars Flowers Assyrtiko (about $25) is produced by a winery with a lengthy history in the Greek wine industry. Originally, the name of the winery was Kourtakis Wines, which was founded in 1895 by Vassilis Kourtakis, the first person in Greece to obtain a diploma in oenology. The winery initially concentrated on Retsina, first in bulk and then later in the bottle, and received much acclaim for their wines. Around the 1970s, the family began to diversify, to produce other types of Greek wines. and continued to succeed, so now it has become the largest producer and bottler in Greece. Approximately ten or so years ago, the name of the winery was changed to Greek Wine Cellars D. Kourtakis SA.
The 2019 Greek Wine Cellars Flowers Assyrtiko, with a 13% ABV, has a pleasing aroma of citrus. From your first sip, you'll be entranced by its freshness, crisp acidity, lemon and apple notes, and its mineral backbone. There is an interesting complexity to the wine as well, elevating it above some of the simple Assyrtiko you might find. All of its elements work harmoniously together and it's simply delicious and refreshing, a great choice for seafood or other light fare. If you're going to have oysters or shrimp cocktail during the upcoming holidays, why not consider this Assyrtiko?
As I've said frequently before, all wine lovers should drink more Greek wines and I've even provided people with Ten Reasons To Drink Greek Wine. The Greek International Food Market has an excellent selection of Greek wines, and I found some of my personal favorites there. Embrace Greek wine!
Posted by Richard Auffrey at 10:05 AM