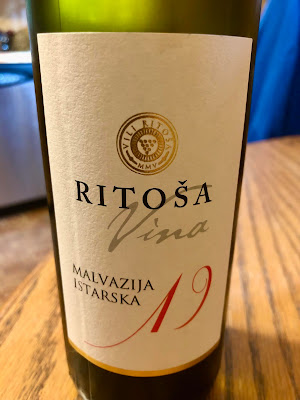 June 25 was the first official celebration of National Croatian Wine Day, a day founded by Anna Micic Viducic to celebrate the compelling wines from this country. The date has special meaning for Croatia as it was also the 30th Anniversary of Croatia's declaration of independence from the Republic of Yugoslavia.
In collaboration with Croatian Premium Wine Exports, a couple of online tasting events, for the media and the public, were held to celebrate this wine day. I attended both events, sampling several Croatian wines, some already familiar to me, including a couple Whites, a couple Rosés, and a Red. From Pošip to Plavac Mali, intriguing indigenous grapes.
I've previously written numerous articles about Croatia, having traveled to the country and sampled many of their wines, along with plenty of delicious Croatian cuisine. It's a beautiful country, with friendly people, and their wines definitely are worthy of much more attention. Fortunately, a number of their wines are available in the U.S. due to the efforts of Croatian Premium Wine Exports.

For me, the stand-out of the online tastings for National Croatian Wine Day was the 2019 Ritoša Malvazija Istarska ($22), which captivated me from the first sip.

During the media event, Ana Ritoša, winemaker at the Ritoša Winery, was present, discussing her winery and this wine. Ana's grandfather once grew a small amount of vines, making wine just for the family. In 2005, Vili Ritosa, Ana's father, purchased about three acres of land near the village of Radmani, in the municipality of Poreč, in the western side of Istria. It's located about 10 kilometers from the sea.
As a brief aside, Istria is a Croatian region that has some Italian influences and which is well known for its truffles and olive oil. Plus, Istria is known for vampires! Who would have suspected that connection?
Vili's original plan was to establish a ranch, to raise animals and grow vegetables. However, he found the land had more stones than soil, and he felt he needed to revise his plans. As Ana was studying wine at school, Vili decided instead to establish a vineyard, planting grapes in 2006, and their first commercial harvest was in 2008.
Their soil, typical of Western Istria, is a red clay with some limestone, and the clay is rich in iron. The vineyard grows five varieties, Malvazija Istriana, Teran, Cabernet Sauvignon, and Red & Yellow Muscat. The winery currently produces 10 different wines, and they might be the only Croatian winery that is "suitable for vegans" as they don't use any animal products at all in the wine making process. Annually, they produce about 24,000 liters of wine, and their first U.S. exports have been through Croatian Premium Wine Exports.
The 2019 Ritoša Malvazija Istarska is made from 100% Malvazija Istarska, which is a very different grape from Italian Malvasia. It's a very common grape in the Istria region, the second most planted variety in Croatia after Grasevina, and has thought to have been grown in the area for centuries. The wine has a 13% ABV, and most Istrian wines have an ABV from 12.5%-13.5%.
The wine was very aromatic, pleasant floral and spice notes, and my first sip brought a smile to my face. It was complex and compelling, with a wonderful melange of harmonious flavors. It was fresh and crisp, refreshing and satisfying with a moderately lengthy finish. On the palate, it was fruity (especially peach and pear) and floral, spicy and with a nice minerality. There was so much going on in this wine, and all of it was delicious.
I could easily sip this on its own, relaxing outside on a warm summer day, but it would also be a fine accompaniment with seafood, light chicken dishes, and cheese. This is the type of wine that you should buy by the case, and I suspect all of your friends would enjoy this wine as much as you. Highly recommended!
Posted by Richard Auffrey at 3:00 AM