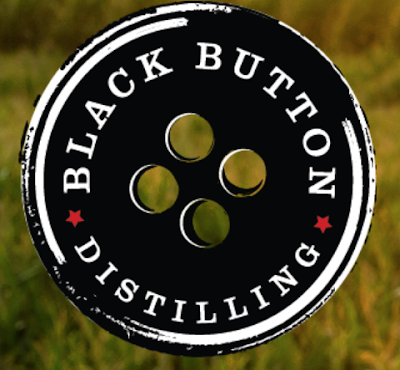 Last Friday, shares of Boston Beer dropped by 26%, largely because of a significantly decreased demand for Hard Seltzer. One of the reason for this reduced demand is the presence of Ready to Drink cocktails (RTDs), which have seen a huge boom in recent years. In 2019, RTD sales increased by about 43% and in 2020, they increased again by about 43%. I recently enjoyed a RTD new to the Massachusetts market, and was quite impressed with it.
I participated in a media Zoom call, having received review samples of spirits, with Jason Barrett, the founder of Black Button Distilling in Rochester, New York. This distillery, which was founded in 2012, is the first grain-to-glass farm distillery in Rochester since Prohibition. At age 24, Jason quit his job to produce whiskey, a bold move but Jason's business appears to becoming successful.
What is the meaning of the name of the distillery? Since 1922, Jason's family has been involved in the business of making buttons for men's suits. His mother still owns the company, and the distillery's office is located next to the button office. Jason is color blind so there was a long standing family joke that if Jason made buttons, he could only produce black buttons. So, that joke was adopted for the name of his distillery.
As Jason stated, "Distillation is concentrating your ingredients." As preparation for his new venture, Jason learned double pass distillation but unknowingly ordered a single pass machine. So, he had to adjust his distillation process, noting that only 5% of these stills are capable of doing what Jason does with his still. However, it also takes twice as long, and can only work for a two hour span. This all helps the uniqueness of his spirits/
All of the grains they use are sourced from within 45 minutes of their location. They produce about 6,500 bottles of spirits each week, and four of their products account for about 85% of their income. Their products, the top four selling ones, are available in about 14 states, and just started becoming available in Massachusetts, distributed by Martignetti Companies. These include their Four Grain Straight Bourbon, Bespoke Bourbon Cream, Citrus Forward Gin, and CanBee Cocktails. 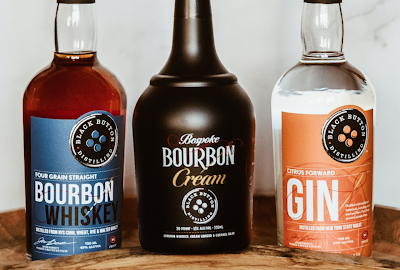 The Citrus Forward Gin ($34.99), their #3 best seller, is made in an American New Age Style, produced with Cascade Hops and navel oranges. As it's fruit forward, it works best in cocktails with fruit components, and doesn't work as well in a cocktail like a Martini. There is a pleasant blend of botanicals, although there's a bit too much juniper for my personal taste (like 90% of all gins), but the addition of the citrus provides a nice balance. This is definitely a gin that works well in fruity cocktails, and which I could enjoy that way.
The Four Grain Straight Bourbon ($59.99) is small-batch made, with 100% New York state grown grains including 60% corn, 20% wheat, 9% rye, and 11% malted barley. It's been aged for about 3 1/2 years in new charred American white oak barrels. The color is 100% from the barrels but only 30% of the taste is from the barrels. By the end of the year, their bourbon will be sold in cardboard tubes, to protect it from UV light which can hurt the whiskey. The bourbon has a pleasant flavor, a nice blend of vanilla, caramel, and baking spices, and would probably work best in cocktails. This is their #4 best seller.
The distillery also make a Rye (which I'd love to taste) as well as a Lilac Whiskey. As Rochester is known as the Lilac City, the distillery decided to make a special whiskey to reflect it. They only make the Lilac Whiskey one day a year, but it's a huge seller.
Their #1 best seller is their Bespoke Bourbon Cream ($34.99), and its creation was a fortuitous accident. Jason's father, a mechanical engineer, retired about 6 weeks after Jason started his distillery. So, his father sometimes worked at the distillery. However, his father rarely drank alcohol, except for Irish Cream, and he was also a very literal man. So, he couldn't tell customers that he enjoyed drinking any of the distillery's products. His father thus asked Jason to make something that he would enjoy to drink, that he could praise to customers.
At a meeting of local farmers, Jason fortunately ran into a man who had the machinery to make Irish Cream, one of only four such machines in the U.S. The man offered his machinery and fresh farm cream to combine with Jason's bourbon. A little caramel was also added to the drink. It quickly became extremely popular, and now they produce about 500,000 bottles annually, selling mostly in New York.
After tasting it, its easy to understand its popularity as it's absolutely delicious, with a rich, creamy mouthfeel and delicious and complex notes of cream, caramel, vanilla and spices. It has a nice freshness to it that some other cream liqueurs lack. This Bourbon Cream is going to appeal to many people, and is perfect on its own, although you could make cocktails with it as well. Highly recommended! 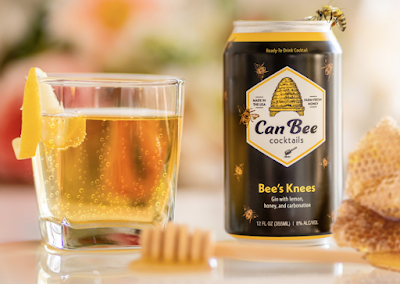 Their first RTD cocktail, produced under the brand of CanBee Cocktails, is Bee's Knees, and it's now their #2 best seller. The original Bee's Knees cocktail was likely invented during Prohibition, and is a blend of gin, lemon juice and honey. The CanBee Bee's Knees debuted in 2021, and is produced from their own Citrus-Forward Gun, real lemon juice, and farm-fresh honey (made from their own bees), without any artificial flavors or colors. It's available in 12 ounce cans, usually in 4-packs for $14.99, with an 8% ABV,
Jason's sister has a Phd on bee neurology, which also intrigued Jason about bees so that they now have six beehives on their farm, using the honey for this canned cocktail. When they first made this cocktail, it was close to a 18% ABV, so they needed to lower that, including the use of additional botanicals. Another challenge was that when lemon juice is pasteurized, it acquires a greater potency, becoming super sour, so they had to significantly cut back the amount of lemon juice they used. As an aside, Jason mentioned that grapefruit doesn't distill well. Finally, they work with a local brewery to can these cocktails for them.
I found this canned cocktail to be light, refreshing and tasty. It wasn't overly sweet or sour, but possessed a nice balance of flavors, citrus and botanicals. And with its lower alcohol, you can enjoy a few on a nice summer day, at the beach, on a boat, etc. There's a light effervescence to the cocktail, and it would work well with food too, especially seafood. And the can is portable and without the worry of glass breakage. Highly recommended!
They are working on two additional cocktails, a Strawberry Mint Vodka and a Bourbon with Honey, Lemon & Coffee. Jason stated he generally doesn't like coffee but this Bourbon cocktail is supposed to taste more like Tiramisu.
Plus, and importantly, "CanBee Cocktails aim to bring awareness to essential bee conservation efforts that preserve their vital presence within our delicate ecosystem by supporting the Xerces Society’s Pollinator Conservation Program, the largest pollinator conservation program in the world."  They can't legally say how much money from the sale of each can goes to saving the bees, but Jason would say that the sale of every can saves about 10 honeybees.
Check the shelves of your favorite liquor store to seek out Black Button products, from their Bespoke Bourbon Cream to the CanBee Bee's Knees.  Jason was personable and down-to-earth, very honest about his distillery and spirits. Its great to support more local distilleries, which are clearly driven by passion.
Posted by Richard Auffrey at 3:00 AM