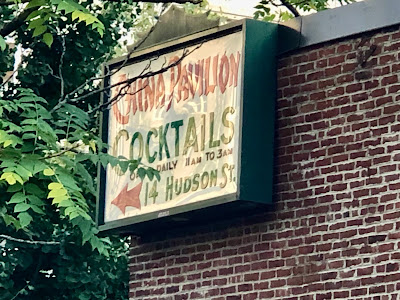 While walking down Hudson Street in Chinatown, you may come upon a large empty lot. Back in the summer of 2019, the Chinese Historical Society of New England worked with the Boston City Archaeology Program on the first archaeological dig in Chinatown in this lot. They were primarily digging at the former location of 6 Hudson Street, where Ruby Foo's Den had been located.
At the end of the lot is 16 Hudson Street, a building which once housed the Ginza Restaurant. On the exterior wall of this building, facing the empty lot, is a sign for the China Pavilion (pictured above). This restaurant doesn't exist any longer although their sign remains. I want to provide some information about this former restaurant, although I'll note that the local newspapers gave scant coverage to this location.

The China Pavilion, Inc. was incorporated on October 28, 1968, with Henry Tom, of Newton, being designated as the President, Treasurer, and Secretary.  The corporation would be dissolved on December 31, 1990. So, the restaurant last for about 22 years. 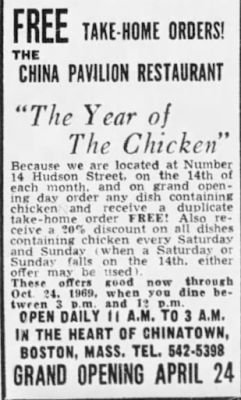 The first advertisement for the restaurant was printed in the Boston Globe, April 20, 1969. It noted that the restaurant, located at 14 Hudson Street, would hold its Grand Opening on April 24. As it was “The Year of the Chicken,” the restaurant chose to offer some specials. On the Grand Opening, and the 14th of each month, if you ordered any dish containing chicken, you would receive a duplicate take-hone order FREE. You also could get a 20% discount on all chicken dishes every Saturday and Sunday. These  specials would be in effect through October 24, 1969, when you dined between 3pm-12pm.
The ad also mentioned “Free Take-Hone Orders.” It's possible that other Chinese restaurants were charging extra for take-home orders.

The Boston Globe, May 22, 1969, had a legal notice, noting a transfer of the liquor license from The Snifter Corporation to the China Pavilion, which was noted as having two rooms and a kitchen.

The Mass Media, March 27, 1972, published an article titled, A Gourmet’s Guide Chopsticking. It described a few of their favorite Chinese restaurant, including the Chinese Pavilion. It noted, “There is no end of the good things that we can say about this restaurant, for it is one of our favorites.” The article continued, “The atmosphere is conducive to anything from planning political intrigues to general hacking off. The food is well prepared and moderately priced.” It also raved about their Luncheon Specials, such as the No.5 ($1.25), which included chicken fingers, butterfly shrimp, pork fried rice, tea and fortune cookies.

There was a brief mention in the Boston Globe, February 4, 1982, that the China Pavilion had some excellent Dim Sum dishes, like their “large fried pork dumpling.”

Finally, the Boston Globe, September 22, 1983, noted the restaurant was open till 4am, and was “amusingly decorated with lanterns and mirror, and the tables are covered with the brightest red cloths." They had an extensive menu of Cantonese and Mandarin-Szechuan dishes, and also served "potent cocktails" for under $3.50. Finally, it was mentioned the restaurant “occasionally serves a gelatinous coconut confection after midnight to satisfy the sweet tooth.”
The restaurant closed in 1990 and their sign remains, 30 years later. The restaurant survived for over 20 years, so it must have done well, and it might have been innovative by offering free take-home orders. It was likely a popular late-night destination, being open until 4am.
Posted by Richard Auffrey at 3:00 AM

I'm guessing that "free take-home orders" is just reiterating the offer of a free duplicate order of any chicken dish on the 14th of each month, rather than suggesting that other restaurants charged for takeaway.