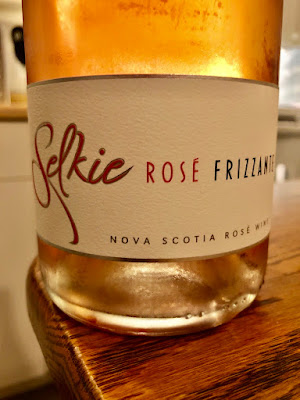 Back in 1978, the Jost family, including Hans Wilhelm Jost and his son Hans Christian, planted a vineyard on the Malagash Peninsula in Nova Scotia, and in 1983, they would receive their winery license as Jost Vineyards. They opened to the public in 1986, and eventually became the largest winery in Nova Scotia. In 2012, the winery was sold to Carl & Donna Sparkes, of Devonian Coast Wineries, who kept on the Jost to help operate the vineyard and winery.
Jost Vineyards makes a variety of wines, including their Selkie brand, named after mythological creatures found in Scottish, Irish, and Faroese folklore. A Selkie is a magical seal which can transform into the form of a beautiful, human woman. They sometimes fell in love with mortal men, but then would be torn from remaining with their love or returning to the sea. Similar shape changing creatures can be found in the mythology of many other cultures.
As Jost's website states, "An elegant creation of our inimitable terroir, Selkie Refresh and Selkie Rosé could come from nowhere but here. True to its name, Selkie wines can transform any afternoon, evening, or moment into something magical."
I recently drank the Jost Vineyards Selkie Rosé Frizzante ($19.99), which is produced from a "proprietary blend" of grapes, which may include a couple hybrids, DeChaunac and Marquette. It's a lightly sparkling wine, produced by the Charmat method, and only has a 8.5% ABV, making it much lower alcohol than many sparkling wines. It doesn't appear this wine underwent any oak aging.
The Rosé has a bright oink color and an appealing nose of bright red fruits. On the palate, it is fresh and crisp, with a light effervescence and delicious red berry flavors with hints of citrus, and a mild sweetness on the finish. It's tasty on its own, although it would pair well with a variety of dishes, including dishes with a bit of spicy heat, as the mild sweetness would work well. With salmon topped by a spicy seasoning, the wine was a very nice pairing. This wine would be a hit at holiday parties.

Posted by Richard Auffrey at 9:09 AM