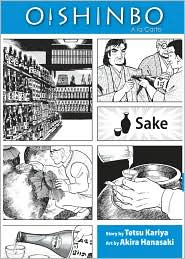 The second volume of the Oishinbo series is Saké, though the book covers other alcoholic drinks too, such as Champagne and Beaujolais. I enjoyed this volume even more than the first one.

Like the first volume, this book begins with two recipes: Sansho Kombu and Beef Short Ribs in Miso. (Sansho is a type of peppercorn and Kombu is a type of kelp.) Then there are eleven chapters, most dealing with Saké but also covering some additional topics. Like the prior volume, at the back of this book are a series of notes, many dealing with Japanese terms, concerning the text.

The initial chapter deals with a man who prefers wine, especially French wine, to Saké and who also thinks wines go much better with food. Yamaoka, the journalist protagonist, challenges him to a contest: a comparison of French wines, mostly whites, against various Sakés and how they both pair with food. The first foods presented include sea urchin, karasumi (mullet roe) and kuchiko (pressed sea cucumber ovaries). The Saké prevails over the wine because the wine seems to make the food taste too fishy. The Saké brings out the taste of the food much better.

The reason for this result is alleged to be that wine has much more sodium in it than Saké, and those sodium compounds bring out the fishy flavors of seafood. So the book claims that white wine and seafood is not really a good match, contrary to what many experts claim. Saké is also said to go better than wine with escargot. These are intriguing claims and I think it would be interesting to set up a similar contest locally. Does Saké really pair better with fish than French white wine? Does wine make fish taste too fishy? Maybe we shall see in the near future.

The second chapter presents a different man who disdains Japanese spirits, claiming that Japan lacks any good ones. He much prefers vodka, cognac and bourbon. Yamaoka then educates him about awamori, a spirit from Okinawa, and especially kusu, an aged awamori. Awamori is made from rice which has been fermented with black koji-kin and then distilled. It ages very well and there are still some 100 year old kusu around. The kusu so impresses the man that he now accepts that Japan has a spirit to equal or rival those of other countries.

We then move onto the third chapter which is an exploration of French Beaujolais, including Beaujolais Nouveau. The book is disdainful of Nouveau though very appreciative of other Beaujolais. Nouveau is said to be "more like grape juice with alcohol." There is probably little in that chapter of any controversy but it is nice to see the appreciation for Beaujolais. In the fourth chapter, we deal with Champagne. There is a man who dislikes Champagne but Yamaoka helps him to appreciate high-end Champagne, such as Dom Perignon and Krug.

The rest of the book concentrates on Saké. It begins repeating the previous claims that wine is not a good pairing with seafood and that Saké is a much better accompaniement. This time they use caviar as a comparison.

The next chapters use a story framework of a Saké brewery that needs to raise money to prevent defaulting on a loan. These chapters provide basic information about Saké, including how and why Saké consumption in Japan has been decreasing. You will learn about the different types of Saké such as honjozo and junmai, how rice polishing is done, brewing processes and more. All of the specific Saké brands they mention in the book are actual ones that exist in Japan.

Despite the decreasing consumption, and feelings that Saké might be dying off, it actually appears there may be a new Saké era dawning. Most Saké in Japan has been rather generic and one-dimensional, nothing special. But now there are more artisan brewers, producing more special Saké. And there is a growing market for this better Saké, including Saké tasting clubs.

If you don't know much about Saké, then this book would be an interesting introduction. It provides plenty of basic information and might also get you thinking about comparisons and contrasts between Saké and wine. If you already are fairly knowledgeable about Saké, you probably won't find anything new here, but you may enjoy this manga anyways. I look forward to future volumes of the Oishinbo series.
Posted by Richard Auffrey at 6:05 AM

I was curious about the seafood with sake/wine claims too. It turns out that some scientist in Japan put this to the test:
http://pubs.acs.org/stoken/presspac/presspac/full/10.1021/jf901656k

What they learned is most of the suspects had little effect on fishy taste. Sodium (Oishinbo's villain) had an +0.086 positive correlation. The great wine scapegoat, sulfates, rated +0.248. The real problem? Iron.

You probably know that caviar fanatics will go to great lengths to avoid letting non-inert metals touch the eggs, like stainless steel and iron. Thus specialty mother of pearl, gold, and glass spoons and bowls for eating caviar. Looks like the Russians know more about this than the mangakas. I'm curious if using ceramic knives on seafood would help the flavor.

Gene Ha, thanks very much for that info. I will definitely check out that study.