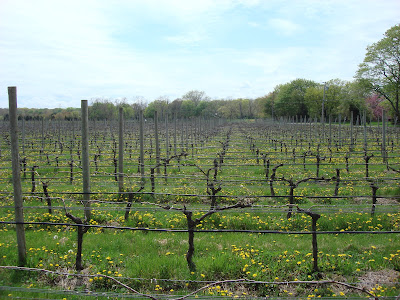 Time for lunch. We dined at Shinn Estates, the meal being jointly sponsored by Shinn Estates, Macari Vineyards, and Jamesport Vineyards. While we ate, we would taste some wines from all three wineries. Plus, we would learn about their efforts at trying to create organic/biodynamic wines. 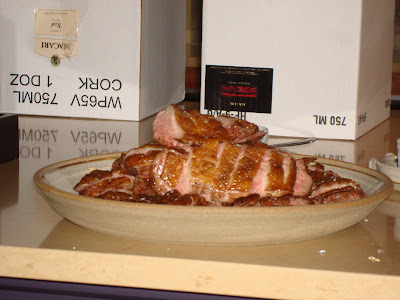 When we first arrived, lunch was still being prepared. They were slicing the Crescent Duck Breasts (pictured above) and I was nearly salivating in anticipation. I love duck and this looked so appealing, nice meaty prices with crisp skin and a thin layer of fat below the skin. When I finally got to taste the duck, it fully lived up to my expectations. Moist, flavorful and absolutely delicious. I could have eaten a couple pounds of that duck all by myself.

During lunch, two wines stood out to me. First, was the 2008 Macari Vineyards Rose (probably around $11-$12 though it has not yet been released.) It is a blend of five grapes and is made by the saignée method. This was very much an Old World Rose, dry, minerally and with restrained fruit flavors of strawberry and watermelon. It reminded me of a French Rose and at this price is a good value.

I was stunned though by our barrel tasting of the 2007 Shinn Estates Cabernet Franc. It was an exceptional wine which impressed many of us. Though I am not usually a fan of Cabernet Franc, this wine could make me a convert. It was the single best Cabernet Franc I have ever tasted. There was so much complexity in its taste, lots of spice and dark berry flavors. A very lengthy finish, great balance and structure. For me, it was a "wow" wine. As their 2006 Cabernet Franc was $39, I assume the 2007 will be at a similar price. Even at such a price, I would highly recommend this wine. If more Cabernet Francs were similar to this, I would be a big fan of the grape.

The owners and wine makers of Shinn Estates, Macari Vineyards, and Jamesport Vineyards are very passionate about organic and biodynamic wines. Joseph Macari, Jr. has been a pioneer in this regard. This type of agriculture is difficult on Long Island, especially due to the weather and soils. They do as much as they can but understand the realities and make necessary compromises at times. Yet they also engage in continual research and experimentation, trying to get closer and closer to fully organic/biodynamic. They are sincere in their beliefs and this is definitely not a marketing stunt.

Barbara Shinn also had the funniest line of the weekend, as she passed around a jar of manure. She basically stated that great wine comes from a horse's ass. 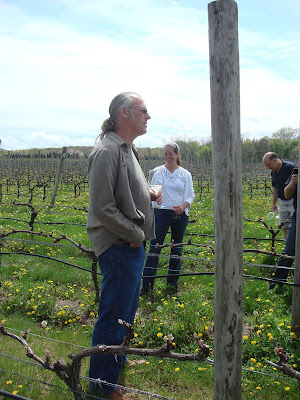 After lunch, we went out into the vineyard with David Page (in the center of the photo), Barbara's husband and co-owner of Shinn Estates. (Barbara is in the back of the photo). Though there had been some rain and overcast skies earlier, the sun now came out, making for a much better afternoon. It was bud break in the vineyard, which you can see pictured below. 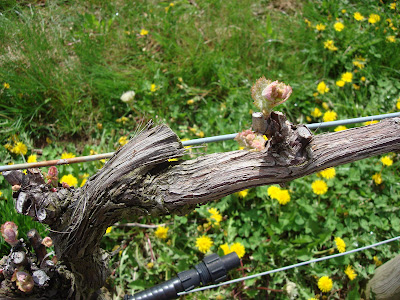 We then moved to their barrel room to taste wines from about ten different wineries, places we would not be visiting this trip. There were plenty of wines from places such as Borghese Vineyard, Martha Clara Vineyards, Bouke Wines, Croteaux Vineyards, Harbes Family Farm, Lieb Cellars, Old Field Vineyards, Palmer Vineyards, and Sparkling Pointe.

I really liked most of the Roses I tried, usually Old World in style, dry but with good fruit. Croteaux Vineyards makes only Rose, from Merlot, and they have three different styles. I liked all three of them and they would be great for the summer. The 2008 Harbes Red Horse Rose was excellent, with bright strawberry fruit yet still dry and minerally. The 2008 Shinn Estates Rose was very nice: dry, creamy and with nice red fruit tastes. 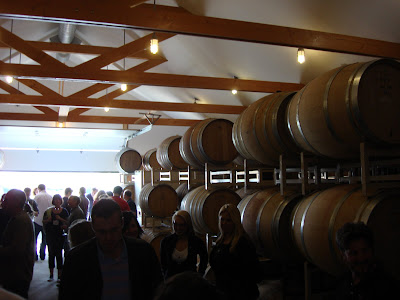 taste camp, I like the concept! the duck dish looks especially good.