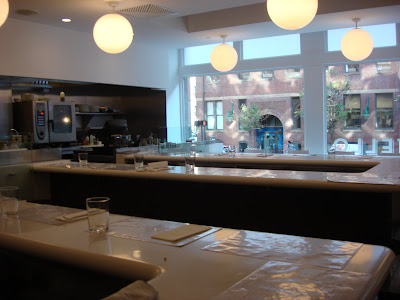 Chef Barbara Lynch strikes again! Lynch's culinary empire has been spreading into Fort Point, and I recently had the chance to check out one of her ventures, Sportello. This restaurant is her interpretation of a classic diner, offering trattoria-inspired italian cuisine for lunch and dinner.

It certainly has the feel of a modern diner with its counter seating and minimalistic decor. The menus double as placemats. For lunch, there are appetizers, panini and pasta dishes. The dinner menu is lengthier, eliminating the paninis and providing entrees as well. The selections sound appealing, especially all of the different pasta dishes. Though modeled after a diner, it is pricier than what you might expect, though the quality of the food likely justifies the cost.

I stopped by for a quick bite, a late lunch, though I will be sure to return. Before my food arrived, I received a plate of sliced bread with an intriguing ricotta spread atop olive oil. Though ricotta is not one of my favorites, this spread appealed to me. It was very creamy, reminding me of a delicious goat cheese, and it was delicious smeared on the bread.

For my meal, I selected the Papardelle ($17), with a bolognese sauce and fried basil. The pappardelle pasta was a wide ribbon of past, cooked perfectly, and covered by an outstanding bolognese. The bolognese had plenty of meat, in an orangey colored sauce, and was extremely flavorful. I have had the bolognese at Lynch's other restaurants, and this, not surprisingly, was equally as good. I highly recommend this dish, which I consider worth the price. 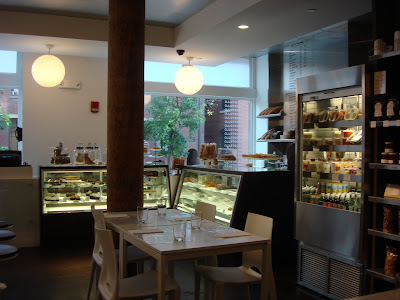 The restaurant also has a bakery inside, though its stock was somewhat depleted when I was there. They open early for breakfast during the week, and a little later on the weekends. You will find a diverse choice of items, including muffins, cider donuts, scones, croisssants, bread, cupcakes, chocolate treats, pastries, cookies, and more. What was available looked quite good and I did pick up a few items that I later enjoyed. I really need to get there for breakfast some time, especially to try their cider donuts.

Though my experience here was limited, I see plenty of potential. What food I did taste was quite delicious. I expect the other menu options and bakery items will be equally as good. I will be returning to Sportello, and will report back when I do. Give this place a try!