With all of the available cheeses for sampling at the Vermont Cheesemaker's Festival, it was a bit overwhelming. I could not fully dedicate myself to a lengthy tasting at any one table, or I would have had to ignore so many other deserving cheesemakers. So, the best I can present now is to highlight several cheesemakers that stood out to me, for various reasons.

These are by no means the only good cheesemakers I encountered. Overall, the quality of cheese was very high and they all deserve recognition. Yesterday's post gave you a link to a list of all the cheesemakers who were present at the festival. My main point is that you definitely should check out and support local cheesemakers. They are producing some amazing cheeses which I am sure you will love. 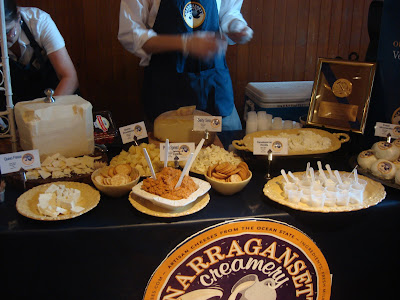 Narragansett Creamery:
Strangely enough, the first cheesemaker I visited at the festival was not even from Vermont. I randomly chose their table, not knowing at first that they were from Rhode Island. The Creamery originated in 2007, a collboration of local food advocate Louella Hill and Mark Federico, owner of Providence Specialty Products. They are currently the only producer of cheeses in Rhode Island.

They make a variety of cheeses, including a Gouda-style cheese, ricotta, mozzarella, feta, farmer's cheese and more. Everything I tasted was very good and my favorites included their Atwell’s Gold (reminding me a bit of Parmigiano-Reggiano), Divine Providence (a mild Gouda like cheese) and the Queso Fresco (soft, buttery cheese). This was certainly an excellent place to start my tasting at the festival, placing me in a pleasant mood.

Fat Toad Farm:
I had a little familiarity with this farm prior to the festival but it was not with their cheese. At the Wakefield Farmer's Market, I found some of their goat's milk caramel sauce. The farm itself is located in Brookfield, Vermont and is a small, family-owned goat dairy. They raise about 25 Alpine and Saanen goats that are pasture fed in season. They currently produce five varieties of goat cheese, including plain chevre, maple chevre, olive lovers chevre, ginger cilantro chevre, and sundried tomato basil chevre. Their goat cheese is very creamy and fresh tasting. But it is their caramel sauce that really stands out.

They produce four varieties of goat's milk caramel sauce: original, vanilla bean, coffee bean, and cinammon. The process for making the caramel is more similar to making maple syrup. They hand-stir fresh goat milk and organic cane sugar over a stove for about four hours. During that time, the sugars in the milk and the sugar caramelize and produce the caramel sauce. I have tried the original and vanilla bean and was impressed by their sweet, creamy flavor. I am a big fan of caramel and this was certainly one of the better caramel sauces I have tasted. I think the goat's milk might add more creaminess to the caramel. 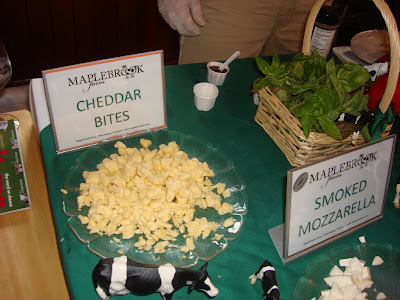 These are the youngest form of cheddar, made in a traditional manner. They are small chunks of cheese pulled from the vat before they can be formed into blocks of cheese to be aged. They are soft, flavorful pieces of cheddar, a rather vibrant cheese. It is a simple cheese, a delicious snack which you can just pop piece after piece into your mouth. 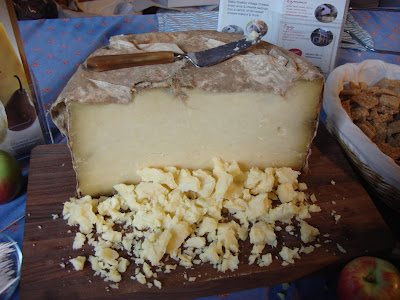 Grafton Village Cheese Company:
Cheesemaking in the village of Grafton extends back to the 19th century, though the original factory was destroyed by fire in 1912. In the mid 1960s, the nonprofit Windham Foundation restored the company. The Windham's mission is to promote Vermont's rural communities. Grafton produces numerous aged cheddars as well as some flavored cheddars.

Maybe the most impressive cheese I tasted at the festival was the Grafton Clothbound Cheddar, pictured above. This cheese is made from raw cow's milk and traditional animal rennet. It is bound in cheesecloth and aged in caves for up to ten months. This cheese had an amazing, complex taste. The flavors burst into my mouth, a melange of nuttiness, butter, earthiness, salt and more. I so much wanted a nice glass of wine to pair with this cheese. This is truly a cheese lover's cheese, an exceptional example of the best of cheddar. This gets my highest recommendation. 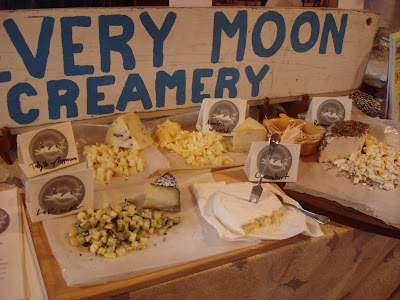 Silvery Moon Creamery:
This is another cheesemaker who is not from Vermont. The cheesemaker, Jennifer Betancourt, actually lives in Maine and is in partnership with Smiling Hill Farm. Jennifer makes a wide variety of cheeses, from cheddar to camembert, from flavored curds to fresh mozzarella. All of the cheeses I tasted were good, and my two favorites were the Camembert and Tally Ho Peppercorn. Both were soft, creamy cheeses bursting with flavor, perfect to spread on bread or crackers.
Posted by Richard Auffrey at 6:00 AM