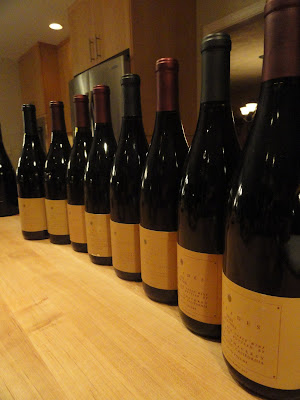 A vertical wine tasting, tasting several different vintages or releases of the same wine, can be quite an educational experience. If a wine is designed to be consistent from year to year, then a vertical tasting won't tell you much, except whether the producer was successful or not. For other wines, a vertical can tell you about vintage variations. Some wine blends change the type and percentage of grapes from year to year, so a vertical tasting can indicate numerous differences, as well as vintage variations.

Last Saturday, I participated in an incredible vertical of eight releases of Sean Thackrey Pleiades, one of my favorite wines. I supplied the wines, which I have been saving for several years. I have been considering doing a vertical for about three years, spurred on each time a new release of Pleiades came out. But I knew I could not taste these wines alone at home. I had to share them with other wine lovers, with people I knew would appreciate the wines. And that is what I finally did. 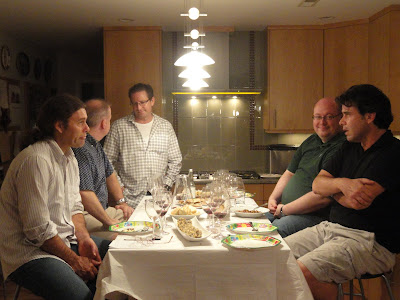 The tasting was held at Adam's (Winezag) home and you might also know a couple of the other attendees, like Dale (Drinks Are On Me) and Richard (Silene's Cellar). We tasted Pleiades XI-XVIII in two flights of four, starting with the oldest to the youngest. I had spent time pondering how to order the wines, whether to start with the oldest or youngest. While discussing the issue on Twitter, people seemed split over which was the best way to do it. In the end, I decided to start with the oldest, which might be the most subtle and complex. I did not want the bolder, younger wines to cloud our palates for the older wines.

Sean Thackrey is a very unique winemaker, a maverick, who has never had formal training as a winemaker. Instead, he studied ancient and medieval texts on winemaking (and has one of the world's largest selection of such manuscripts), using numerous techniques garnered from this research. He experiments, learning as he goes, and to me is the epitome of an artisanal winemaker, blazing his own path.

All of his wines are named after constellations, like Pleiades, Orion, Sirius, Taurus and Andromeda. He produces about 5000 cases of wine each year, half being Pleaides, and about 40% of his production is exported to Europe and Japan. This means the wines are in very limited supply in the U.S.

In Greek mythology, the Pleiades were the seven daughters of Atlas and thus the wine is said to contain seven grapes (though it might sometimes contain more) and some of the commonly used grapes include Syrah, Barbera, Carignan, Petite Sirah, Zinfandel, Sangiovese and white Viognier. Thackrey does not measure the percentages of the grapes, using what he feels like, tasting and testing as he goes along. It is a nonvintage wine, each release receiving a new Roman numeral, and there have been eighteen releases to date. The Pleaides usually sell for $25-35 a bottle, dependent on where you buy them, with the East Coast commonly charging more than the West Coast.

I enjoy Pleaides so much because of its intense flavors, complexity and unique character. And the vertical tasting confirmed and supported my beliefs, each of the eight wines being so different. Of the eight wines, I enjoyed them all, though some better than others. My two favorites were the XI and XV, both bold, lively, complex and interesting. They also possessed an appealing, earthy gaminess that I equate to some Burgundies. I am fortunate to have a few more bottles of these wines in my cellar. My own views in this regard were echoed by several others at the tasting, who felt these were two of the best wines of the group.

But one of the best parts of the evening was being there were so many good friends, listening to their thoughts about the wines. It was a good mix of people, some being more analytical in their approach, others more hedonistic, simply enjoying the wine with little analysis. I am sure that being with such people enhanced the experience of the wines, as it tends to do in such a situation. If you are going to open a special wine, be sure to share it with good friends and family. 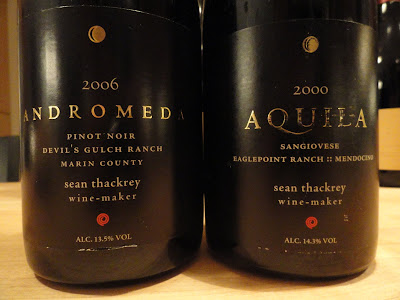 Beside the Pleaides, we also tasted the 2006 Andromeda and 2000 Aquila. The Andromeda is made from Pinot Noir, from the Devil's Gulch Vineyards, a very well known vineyard in Marin County. It is located on a steep, hillside adjacent to the Point Reyes Peninsula. They supply grapes to a number of wineries, including Dutton Goldfield, Schramsberg Wines, and Thomas Fogerty Winery. The Aquila is made from Sangiovese from the Eaglepoint Ranch in Mendocino. Both were excellent wines, the Andromeda maybe being a bit young. Yet it were the Pleaides that were the stars of the evening.

Please also read Adam's excellent review and analysis of this tasting.
Posted by Richard Auffrey at 10:00 AM