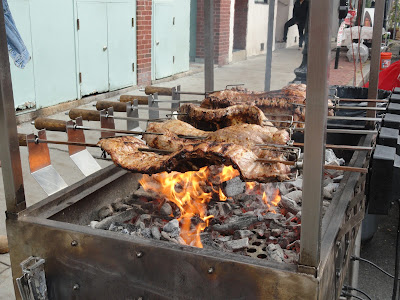 "It's a simple question Doctor, would you eat the moon if it were made of ribs?"
--Will Ferrell

Yes, yes I would. And on a beautiful Sunday afternoon, it seemed as if part of Cambridge was made of ribs too and I certainly ate my way through it. In total, I sampled 20 different ribs, which is a great and tasty way to spend any day. I would have tasted 21 ribs, but unfortunately one restaurant ran out of ribs early. 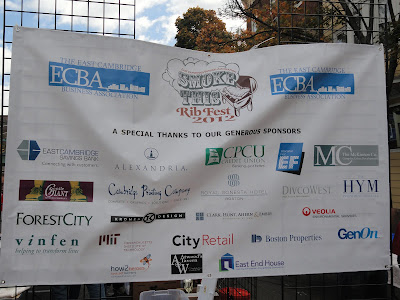 This past Sunday, the East Cambridge Business Association (ECBA) presented the annual “Smoke This” Rib Fest 2012, pitting the chefs and pit masters of twenty-one restaurants and establishments against each other in a culinary showdown to determine who made the Best Ribs. Chef Tony Maws, of Craigie on Main, Kenji Alt, the Chief Creative Officer of Serious Eats, and Dave Andelman, of The Phantom Gourmet, were the celebrity judges of this event. There was a second level of judging as well, three local bloggers, including Erica of In and Around Town, William of The Boston Foodie and myself. In addition, the public had an opportunity to vote for their favorite ribs. 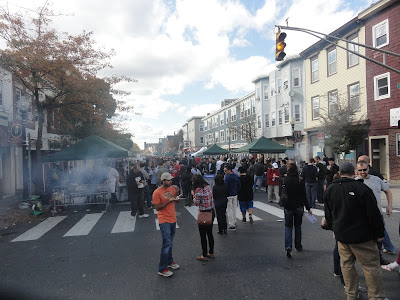 The event brought out lots of people, and later in the afternoon there were several long lines at some of the more popular tables. At times, the air filled with smoke and ash from all the grills, and when I went home, my shirt even smelled of that smoke. I was pleased that there were numerous tables and chairs set up along the street so you could sit and eat your ribs. Some of the ribs were expectantly messy so trying to eat them while standing up would not be the easiest. I am sure the fest went through tons of napkins, despite plenty of people licking the rib sauce off their fingers. 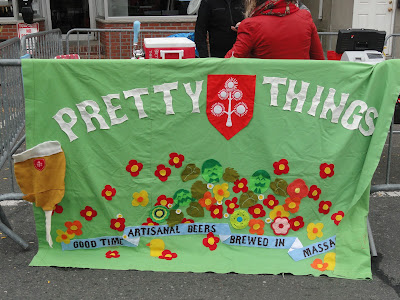 Unfortunately, no wine was available at the Rib Fest as they chose to concentrate on beer, which was certainly popular, including Pretty Things Beer, Cambridge Brewing Co. and Portico Brewing Co. But a hearty red wine would have pleased me, or even an umami-rich Sake. 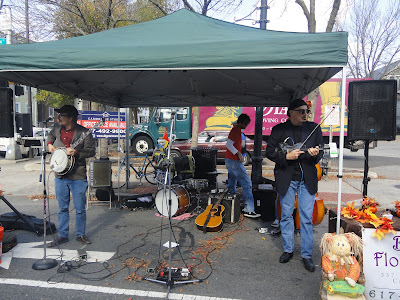 There was music by Hayride and The Atwood’s Monday Night Bluegrass Band. Fiddles and banjos adding to the festive atmosphere. 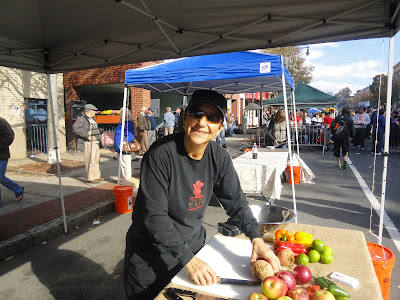 In addition, there were cooking demonstrations, brought by the good people of How2Heroes, 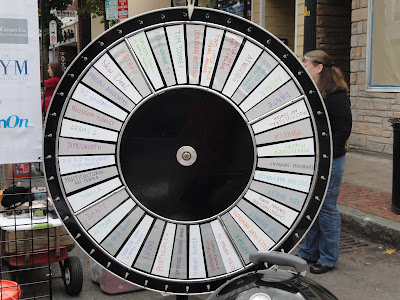 For $3, you could take a spin on the Wheel of Chance and everyone was guaranteed to win a prize. I took a spin and won a $25 gift certificate to the New England Aquarium. 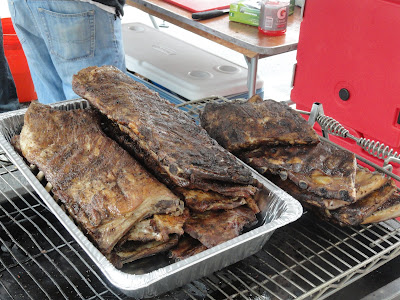 Of course, the main attraction at the fest were the ribs.

When you think of ribs, what first comes to mind? Southern style ribs, such as Kansas City, St. Louis, Memphis, Carolina, Texas and more. Though the definitions can be a bit vague, you can generally separate the styles into two basic schools: wet and dry, dependent on whether the ribs are slathered in a sauce or prepared with a dry rub. The nature of the sauce varies, whether thick, thin, sweet, spicy or a combination of sweet & spicy. In addition, the cut, size of the ribs and which bones are removed makes a difference. We cannot forget Asian style ribs either though, and I mean more than the ordinary spare ribs you find at basic Chinese restaurants. Tea smoked, five spice, Thai style and so much more. At the Rib Fest, you got to experience a myriad of styles and preparations. 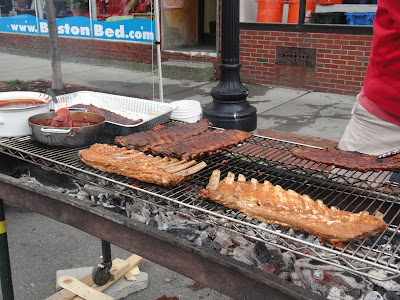 The celebrity judges selected Bambara as the First Place winner of the Rib Fest. They also awarded Second Place to Tupelo and Third Place to the Cambridge Rindge & Latin School. The public had some different choices, awarding First Place to East Side Bar & Grill, Second Place to ArtBar and Third Place to Champions Sports Bar. It is very interesting that the celebrity judges and the public did not choose any of the same winners. That shows how tastes can vary significantly.

My own choices for the Top Three Ribs are more in line with the public voting. Before announcing those choices, I want to congratulate all of the entrants for their rib dishes. Judging was not easy because there were plenty of ribs which I enjoyed, each with their own unique attributes. Though I will list my Top Three choices, I will also give a couple Honorable Mentions to other ribs which deserve recognition. 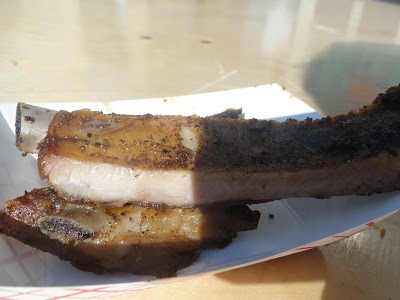 Third Place is awarded to Abigail's Restaurant. This was the toughest Place to decide as there were several worthy candidates. Abigail's ribs were Memphis style, a dry rub, with a Kansas City style sauce. the ribs were tender and meaty, with an excellent melange of spices in the rub. I got a side of their house sauce for dipping and found it also to be delicious, with a spicy backbone. These are the type of ribs that you can easily devour a dozen or more. 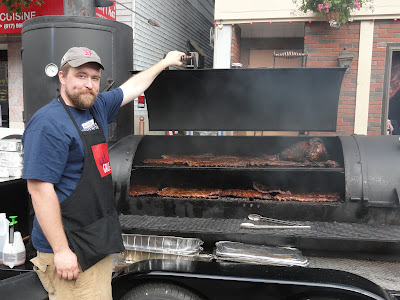 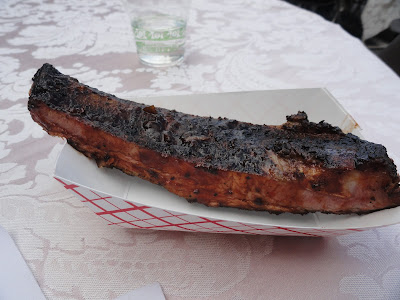 Second Place is awarded to East Side Bar & Grill. They certainly looked very professional, with their huge grill, and it is easy to understand why their ribs are so popular with the public. They called their pork ribs "Texaschusetts" style, a blend of a Massachusetts barbecue sauce with Texas spices on the ribs. This is one of those "wow" ribs which should impress most people. Meaty, tender, and grilled perfectly with a great depth of flavor, both sweet and spicy. You'll want to order a complete rack of these ribs to satisfy your inner carnivore. 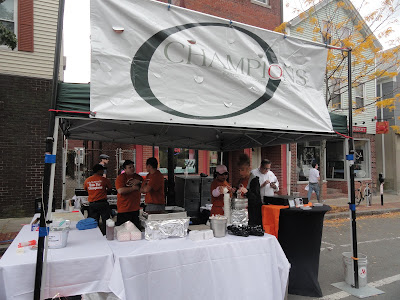 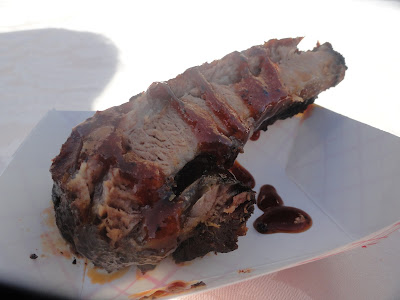 First Place is awarded to Champions Sports Bar! These ribs had a Kansas City dry rub, were cooked over apple, hickory and cherry woods, and had a glaze that included apples and brown sugar. The moist, tender meat slid off the bone and the taste impressed with its complexity and melange of compelling flavors, both sweet and spicy. The sauce accented the ribs without overwhelming it. This was another clear "wow" dish and I was tempted to remain at their table and devour several more of these ribs. Kudos for such amazing ribs! 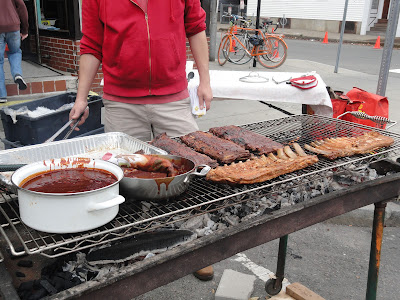 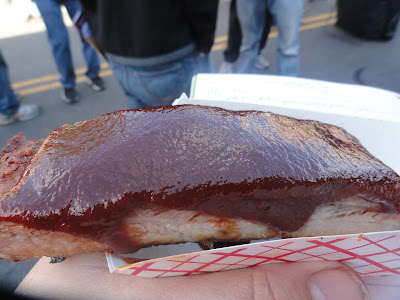 I want to give Honorable Mention to the New Deal Fish Market for their incredible barbecue sauce. Their southwest style ribs were generously slathered with an Italian chestnut honey-based sauce. This umami-rich, earthy sauce possessed an intriguing flavor. I recently got to taste some chestnut honey and loved its earthiness, and believe it worked great in this sauce. 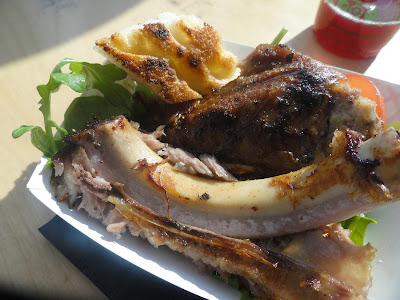 I also want to give Honorable Mention to the ArtBar. Their Spiced Lemon Confit Marinade Baby Back Ribs had one of the best presentations, with greens and focaccia bread. It also possessed one of the most subtle and unique flavors of all the ribs. After the big, bold flavors of many of the ribs, these were certainly a major change. ArtBar also offered a free taste of a new soda their bartender, Elizabeth, created: a combination of pomegranate juice, lime and black pepper. Such a bold, peppery flavor with nice fruity undertones.

Congratulations to all the winners! I can't wait for next year's Rib Fest.
Posted by Richard Auffrey at 4:00 AM

Oh, gosh. I can't possibly be as hungry as I suddenly am. I really enjoyed this. Too much, I'm thinking.