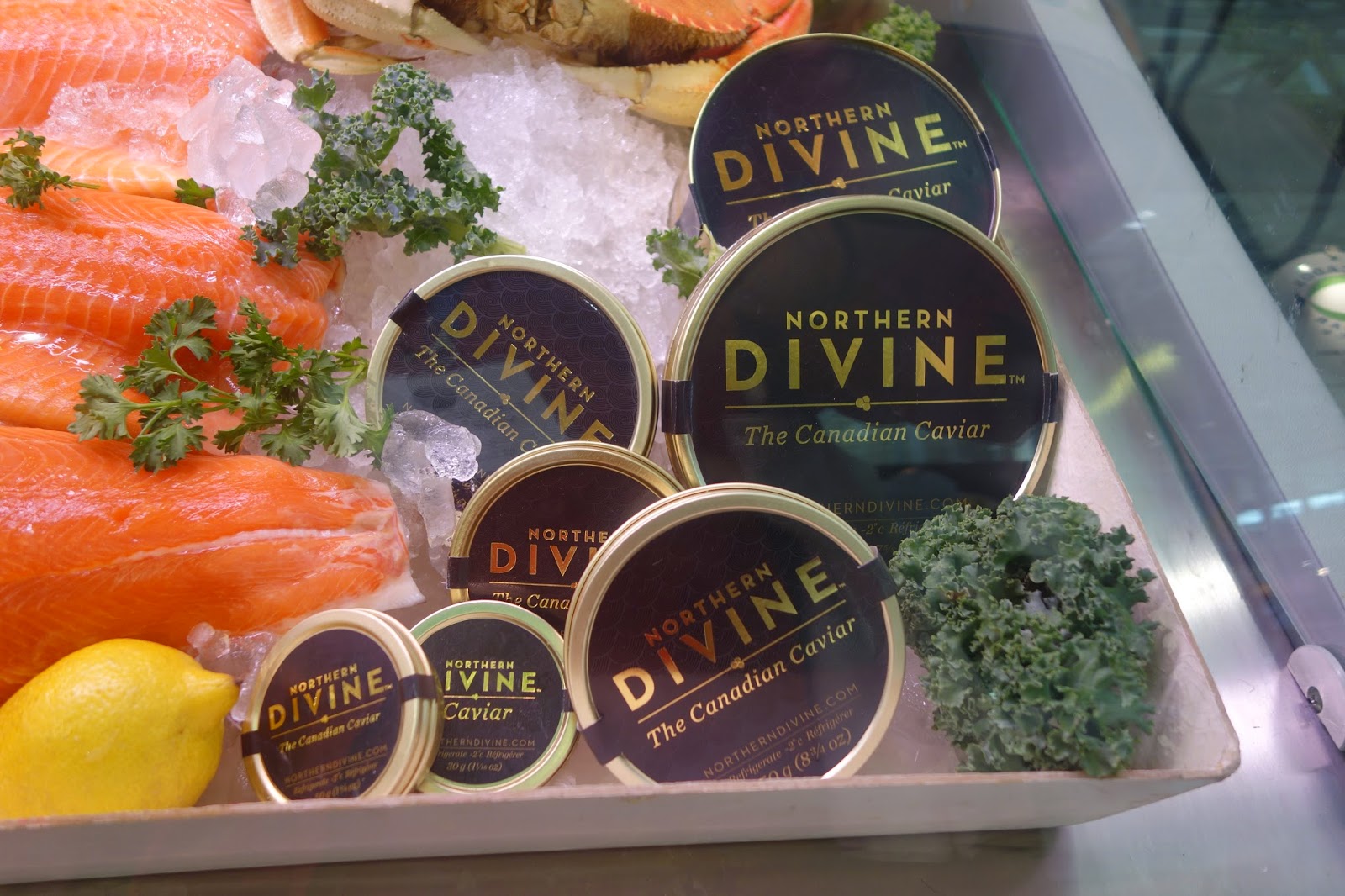 One of the great joys of attending Seafood Expo North America is the opportunity to explore the bounty of the Seven Seas, to gorge yourself on a vast variety of seafood samples. The exhibitors provide food samples to lure and entice potential purchasers, to show them the quality and taste of their products. Without sampling the seafood, how would a purchaser know whether he should buy it or not? You'll find cold and hot seafood samples, from oysters to fried catfish, and recipes that are simple to complex. I always encourage people attending the Expo to broaden their palates and taste new foods, different seafoods that they have never tried before. You might find a new favorite.

Overall, much of the seafood is prepared very simply, and in some respects, creativity takes a back seat. However, you still will find a handful of chefs creating some intriguing dishes. The Expo might not be the best venue to cook a more complex dish, especially as many booths possess only rudimentary cooking devices, but it can be done. For example, the Louisiana Seafood pavilion always seems to do a good job of creating some delicious and inventive dishes.

I taste many different items at the show, though certainly not everything that is offered as there is just too much for any single person to taste. In general, I enjoy most of what I eat but only a few items truly merit to be highlighted here. I want to share with my readers those foods which were my favorites, what I consider some of the tastiest, most compelling and interesting of all the samples I enjoyed. If you attended the Seafood Show, and have your own favorite samples, feel free to tell me about them in the comments. 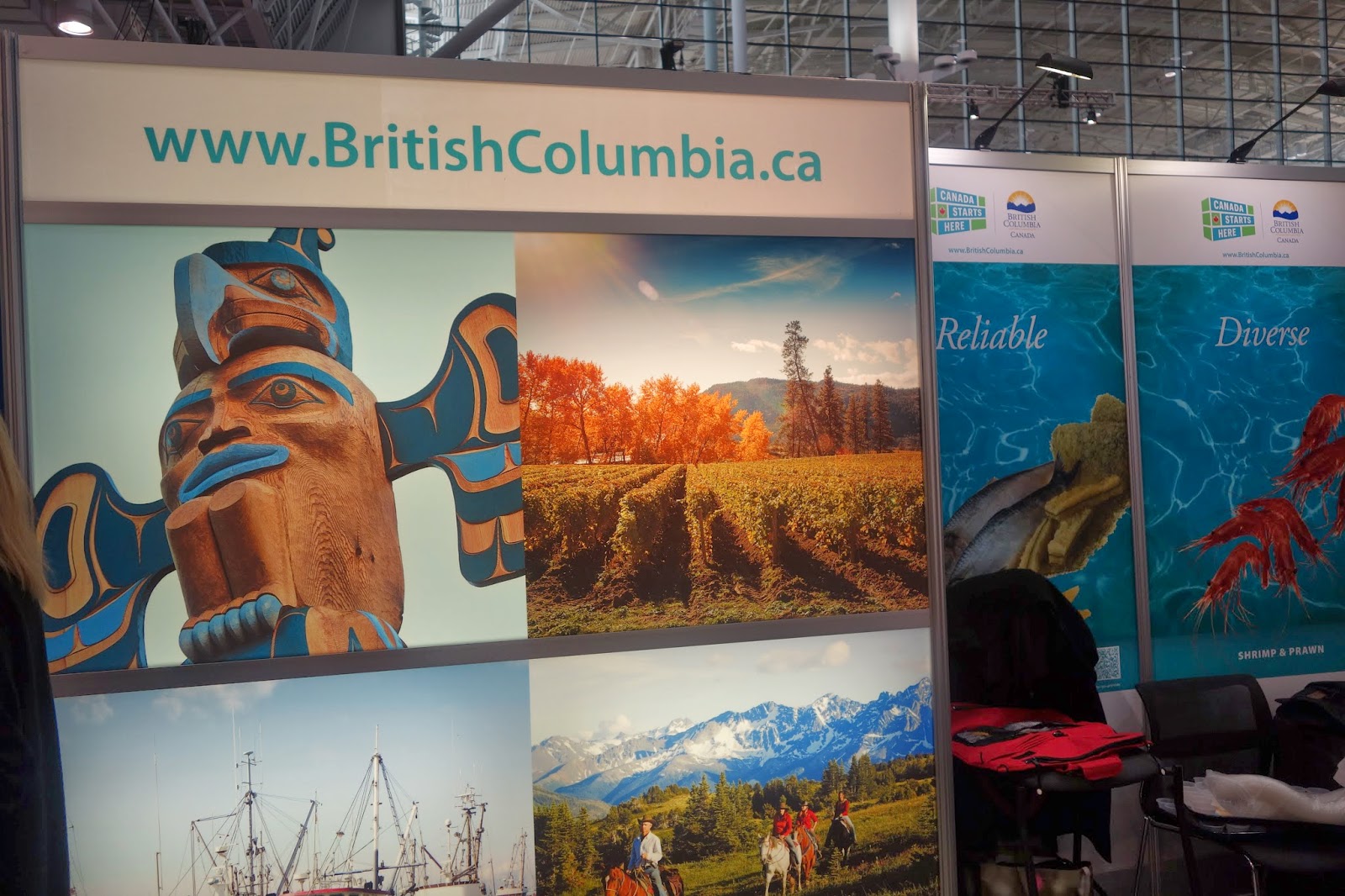 Last year, I stopped by the British Columbia pavilion and our Canadian neighbor does an excellent job of offering fresh, sustainable seafood. In British Colombia, they produce over 100 species of seafood, exporting about 80% and the U.S. receives about 57% of those exports. And what is important is that their seafood tastes great, from their salmon to their caviar. As I enjoyed their samples so much last year, it was a no brainer that I would return again this year to see what they were serving. And I wasn't disappointed in the least. Next year, make sure you stop by this pavilion. 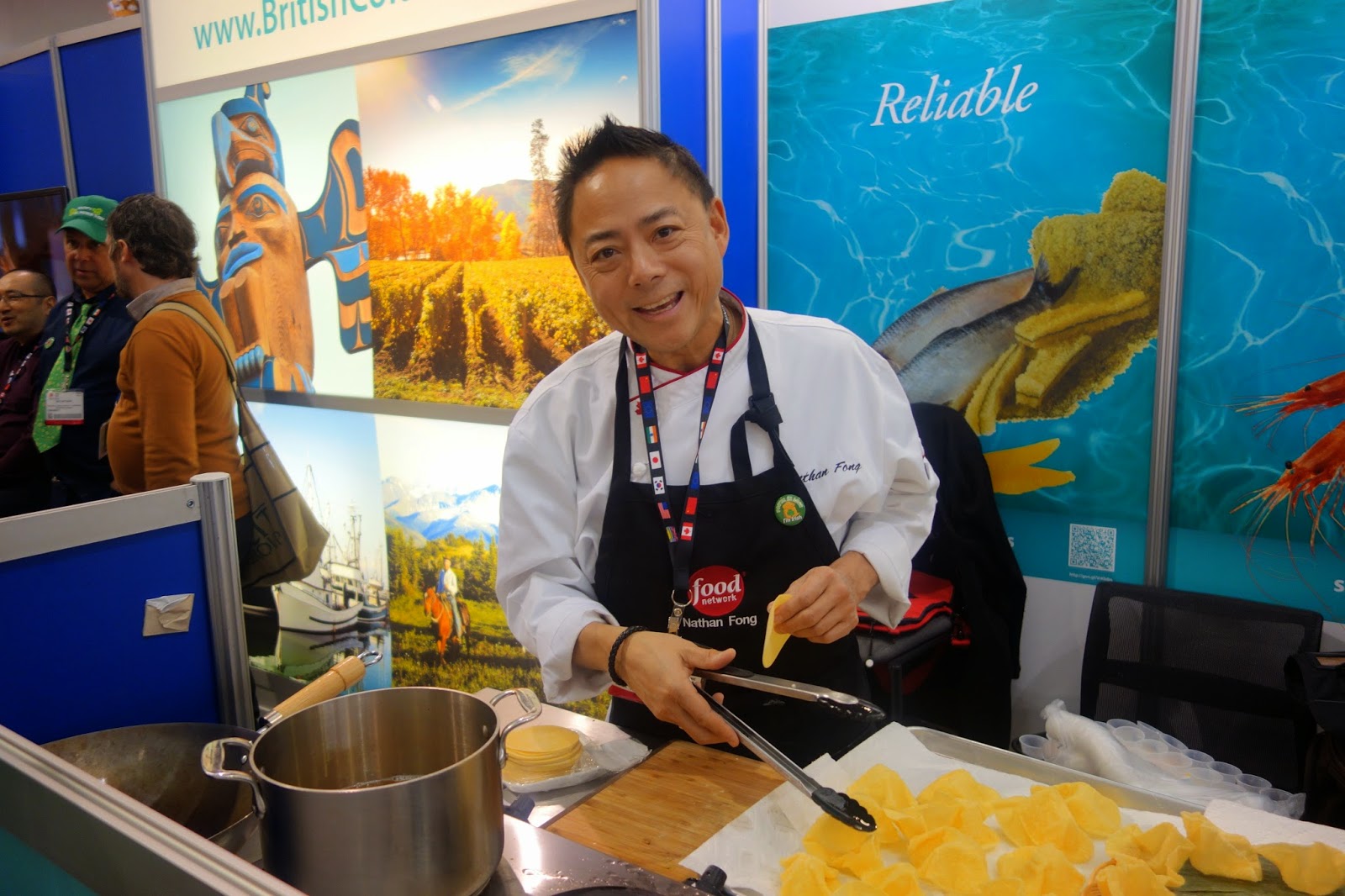 Once again, Chef Nathan Fong, a food stylist, journalist, and TV personality, who was born in Vancouver, presided at the pavilion, investing his deep passion and creativity into his cooking. Last year, he produced my favorite samples at the Expo and has repeated that honor this year. With lots of energy, he sourced some of the best seafood of B.C., and created at least seven different dishes for attendees to sample and savor. 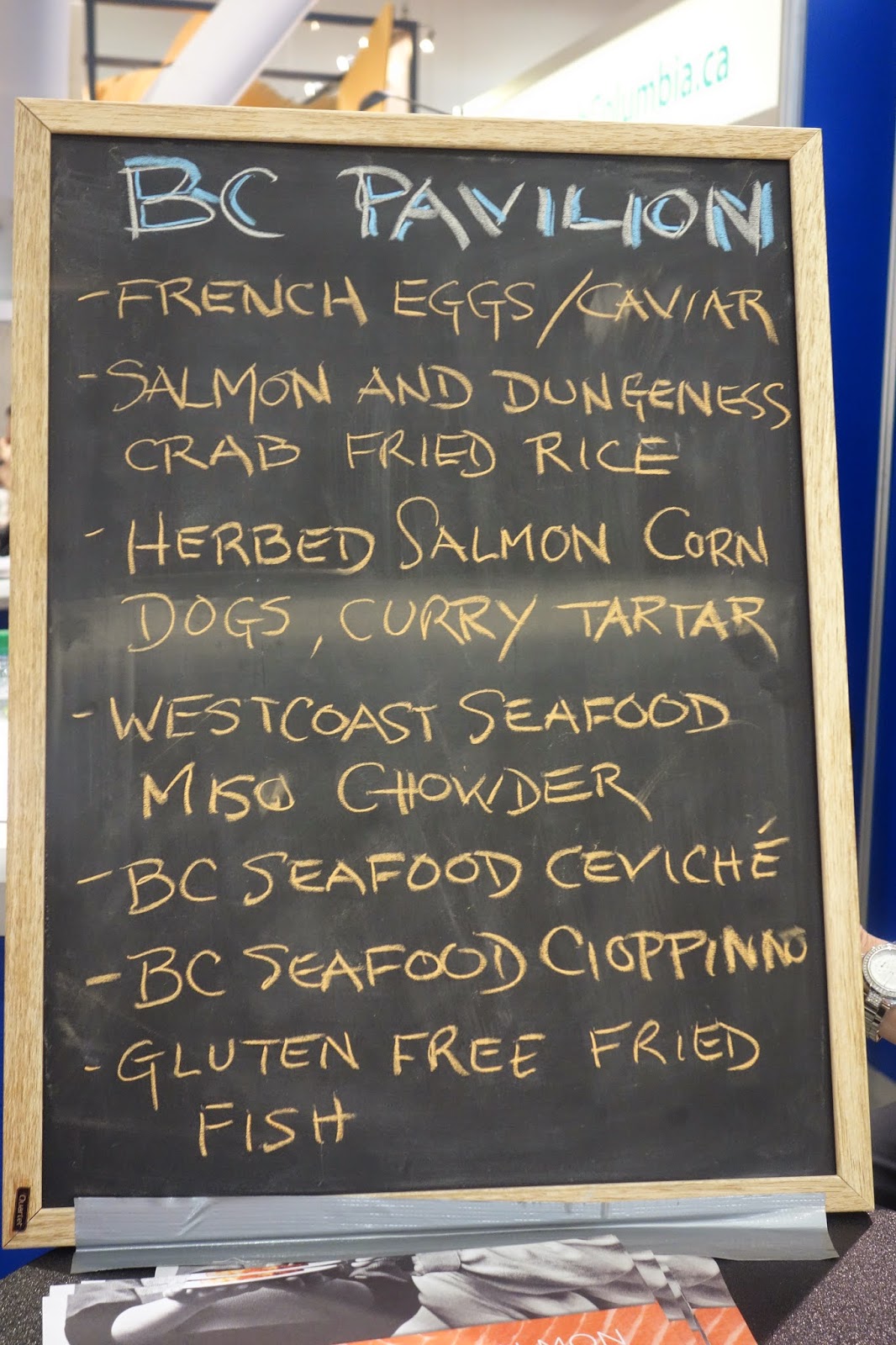 Look at the list of the items that Chef Fong created! French eggs & caviar? How hedonistic. And using the new Nextjen Gluten-Free batter blend, he made a fried fish. This is a batter which you'll never realize is gluten-free as there is no sacrifice of taste. And this list was not even complete. 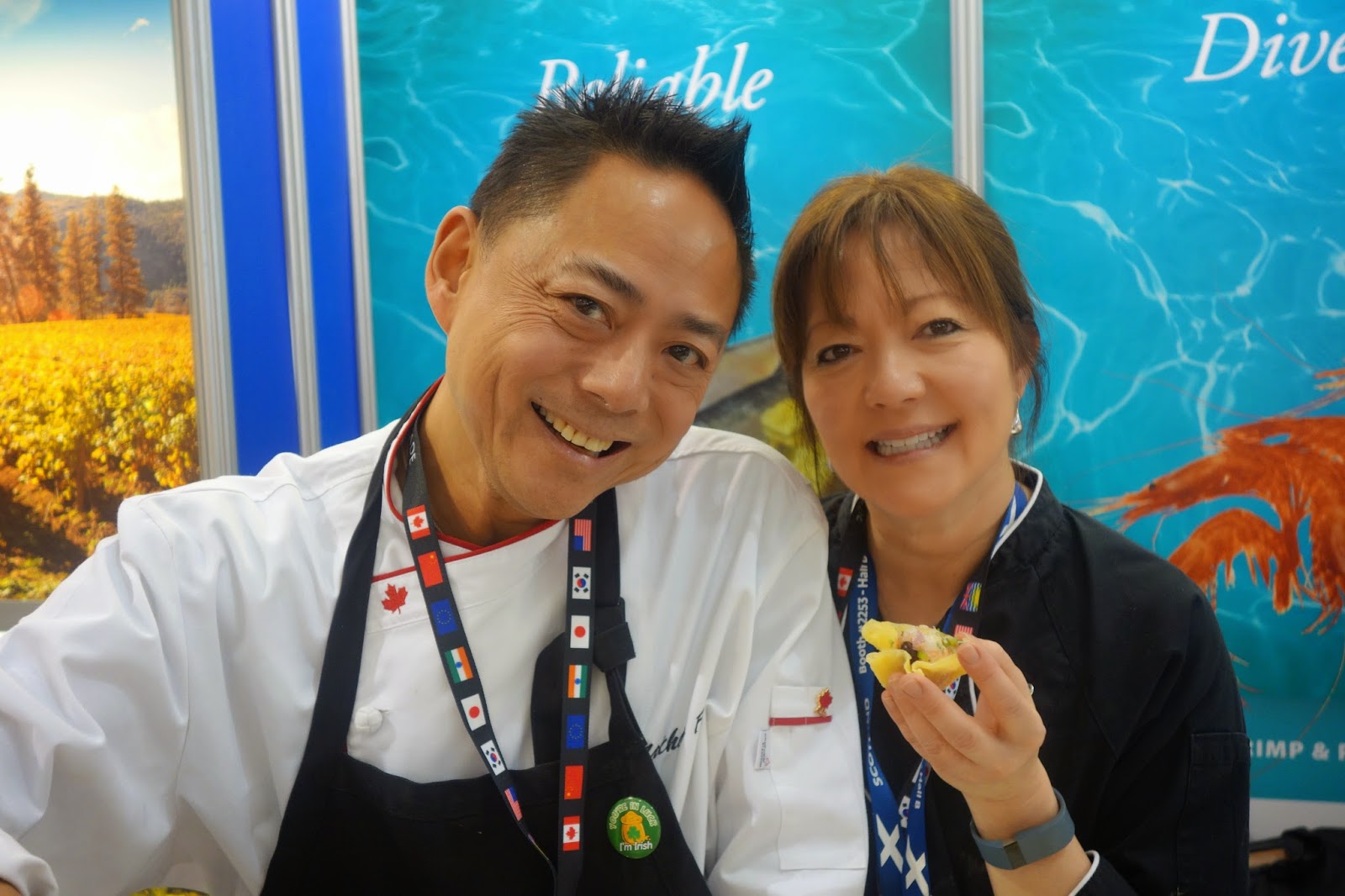 Joining Chef Fong, helping him prepare the dishes at the Expo, was my friend Jacqueline Church, a writer and private cooking coach. 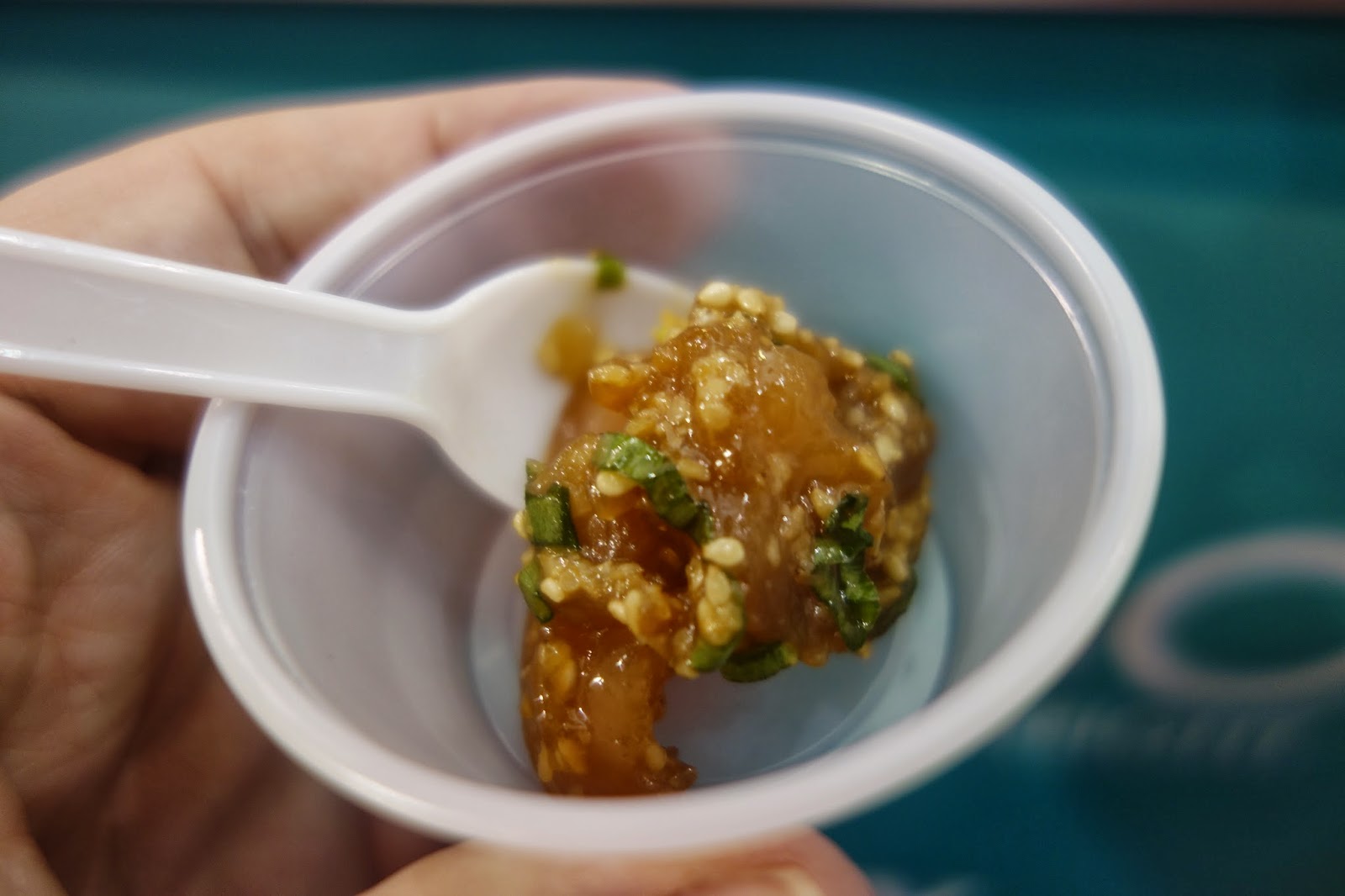 One of the dishes not listed on the above menu was some Albacore tuna with a sesame sauce. Such a great texture to the fish and the sesame sauce enhanced the flavor. Savory and light, clean and balanced. 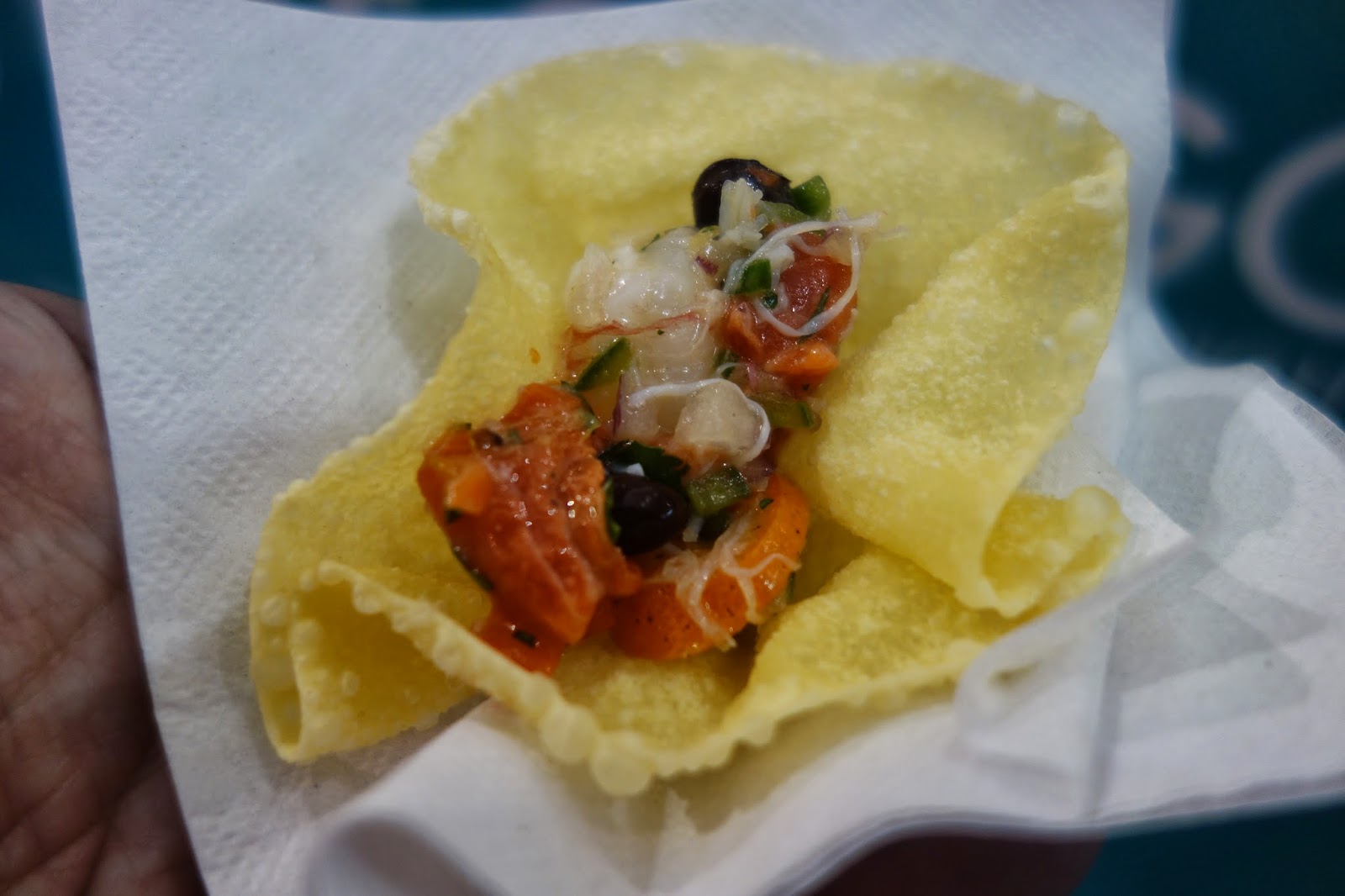 This Seafood Ceviche sat in a fried wonton skin, and containied shrimp, crab and salmon. Another fresh and light dish, the crispiness of the wonton enhanced the texture and taste of the ceviche. 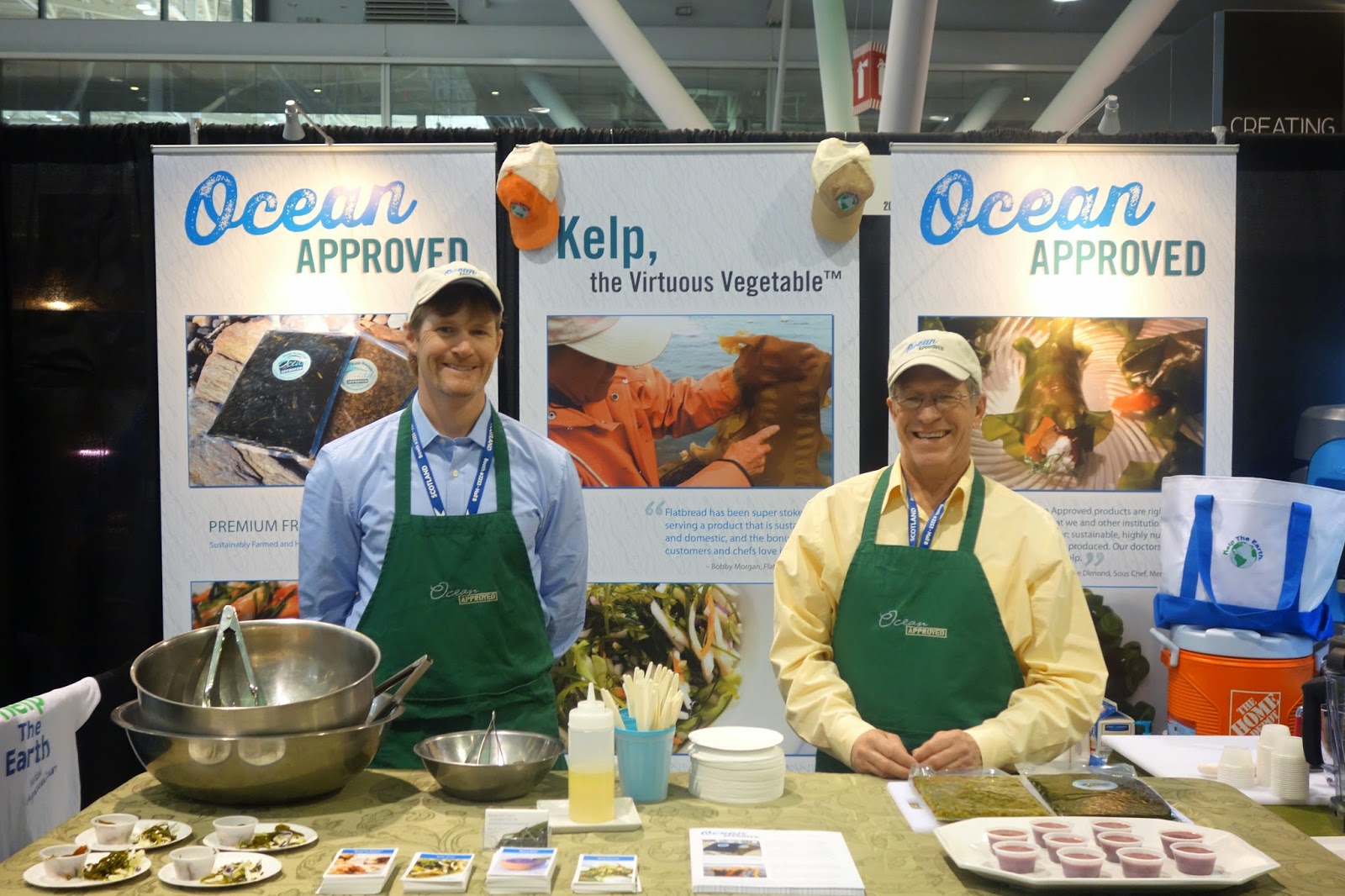 There is a running joke with my friends that I don't eat anything green so it will be a big surprise to them that one of my favorite items at the Expo this year was green, kelp that is farmed raised in Maine. Ocean Approved, which was founded in 2006, was the first kelp farm in the U.S. and they grow it sustainability in the cold, clean waters of Maine. What a fascinating local story and this is the first time I had learned anything about it.

They see kelp farming as an industry and not just something done by their own company, and in fact, even have a Kelp Farming Manual on their website. They want to share their knowledge and experience with others, a noble sentiment. They start the annual growth process in September by creating seed in their nursery, and then plant it from October to December, finally harvesting it around March.

Upon harvesting, the kelp is cut, blanched and then froze. Interestingly, the kelp's biological composition allows it to freeze and thaw twice a day, with the tides. It is fresh frozen, never dried, and sold in one pound frozen pouches. To serve it, you just have to thaw, drain and serve. Kelp is very healthy for you, being gluten free and low in calories, carbohydrates and fat. It also is an excellent source of calcium, magnesium, phosphorus, potassium, and iron, as well as one of the few foods with the nutrient iodine, which is essential for hormone balance. 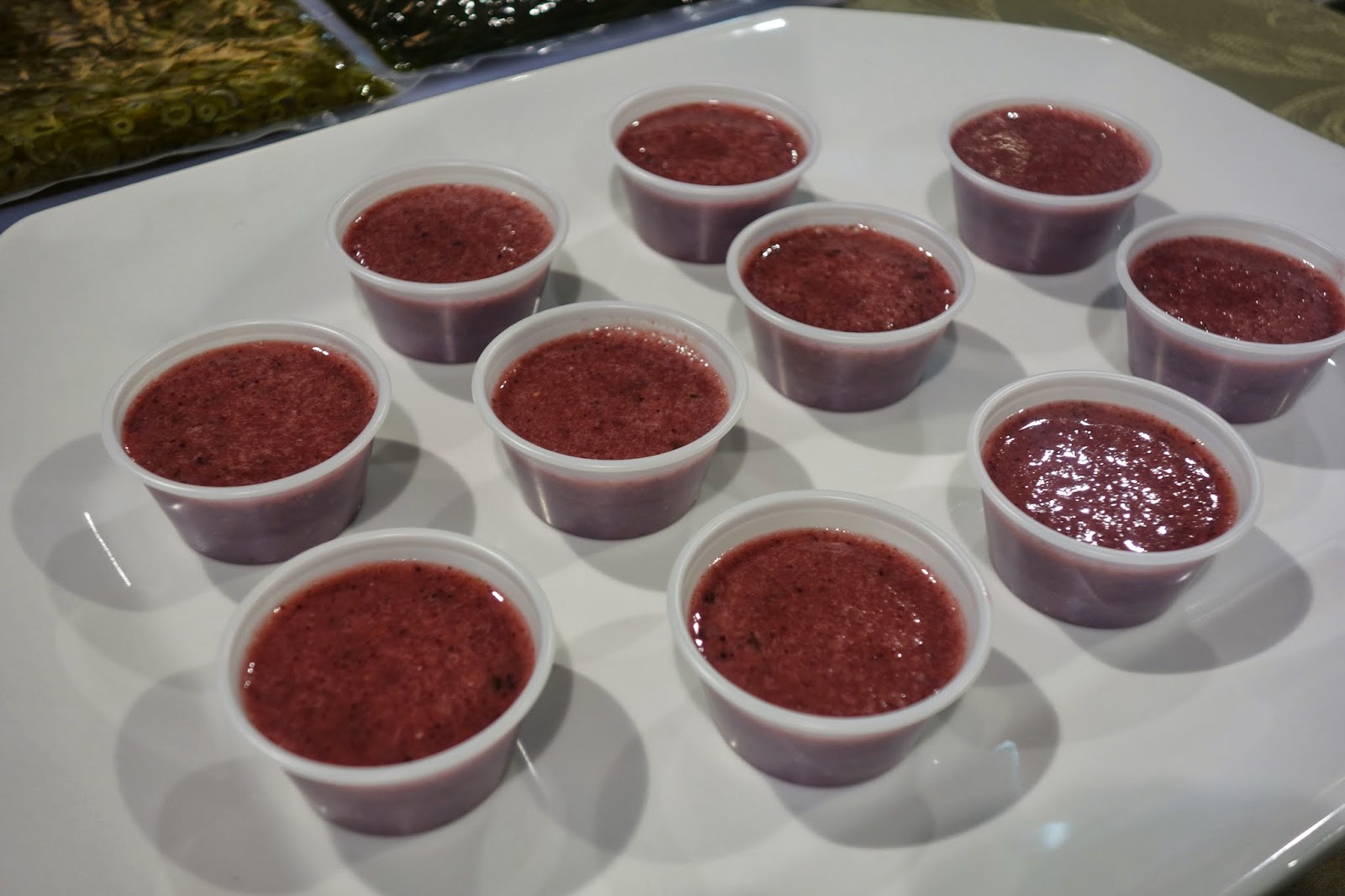 These Berry Kelp Smoothies were a great breakfast drink! Made with banana, frozen berries, mint leaves, kelp, and nondairy milk, it had a strong berry and fruity flavor, and you would never have known it contained kelp. A great and tasty way to get all those health benefits of kelp, and even veggie haters would love this smoothie. 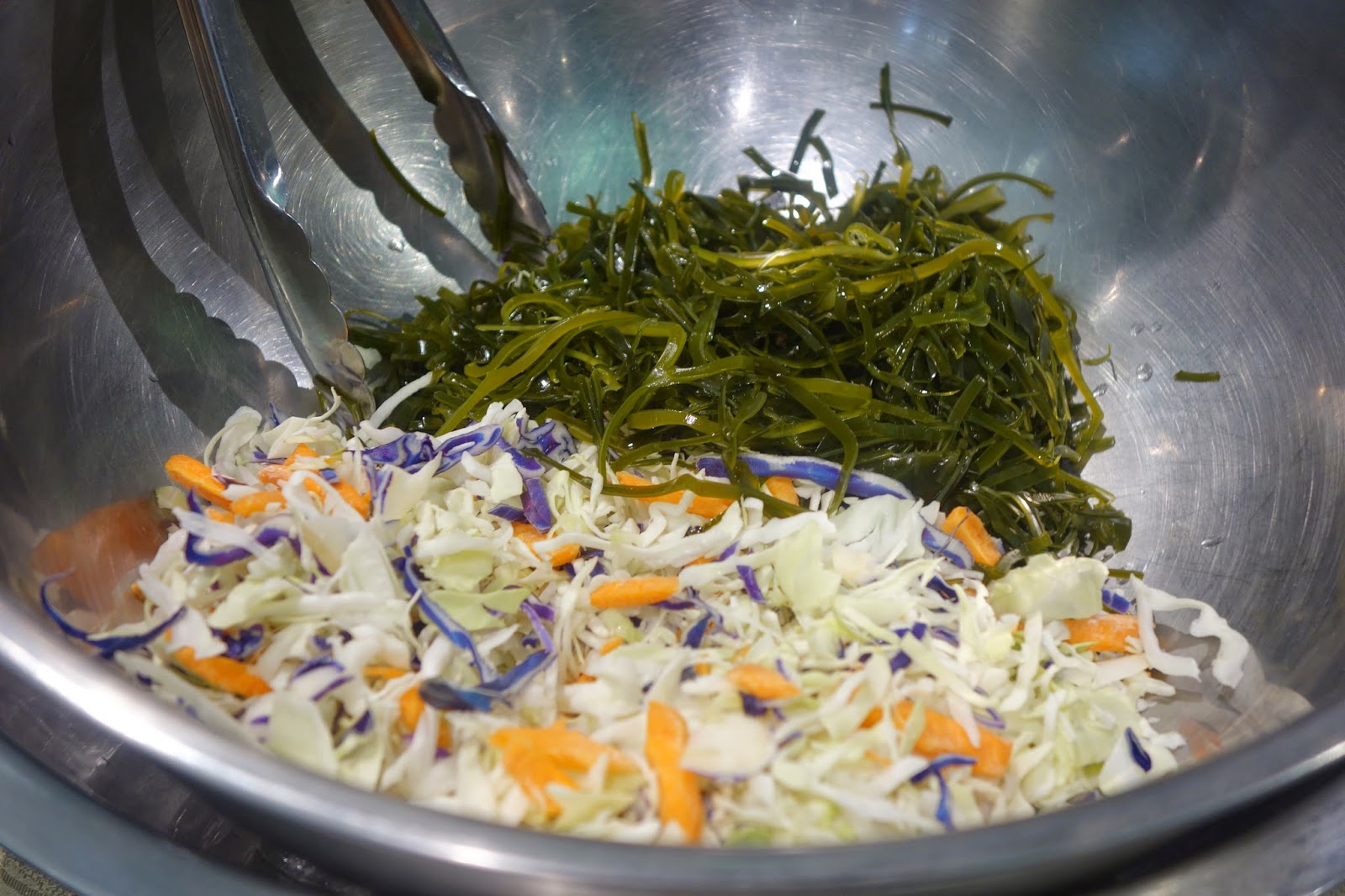 They also offered a Kelp Slaw and a Kelp Savory for sampling, and the Savory appealed to me as well. Made with white vinegar, salt, cayenne pepper and fresh dill, it was almost like a pickled kelp, which had a nice crunch and intriguing taste. It didn't taste fishy but more savory and briny, with a hint of heat. I'm going to have to get myself some of the Ocean Approved Kelp. 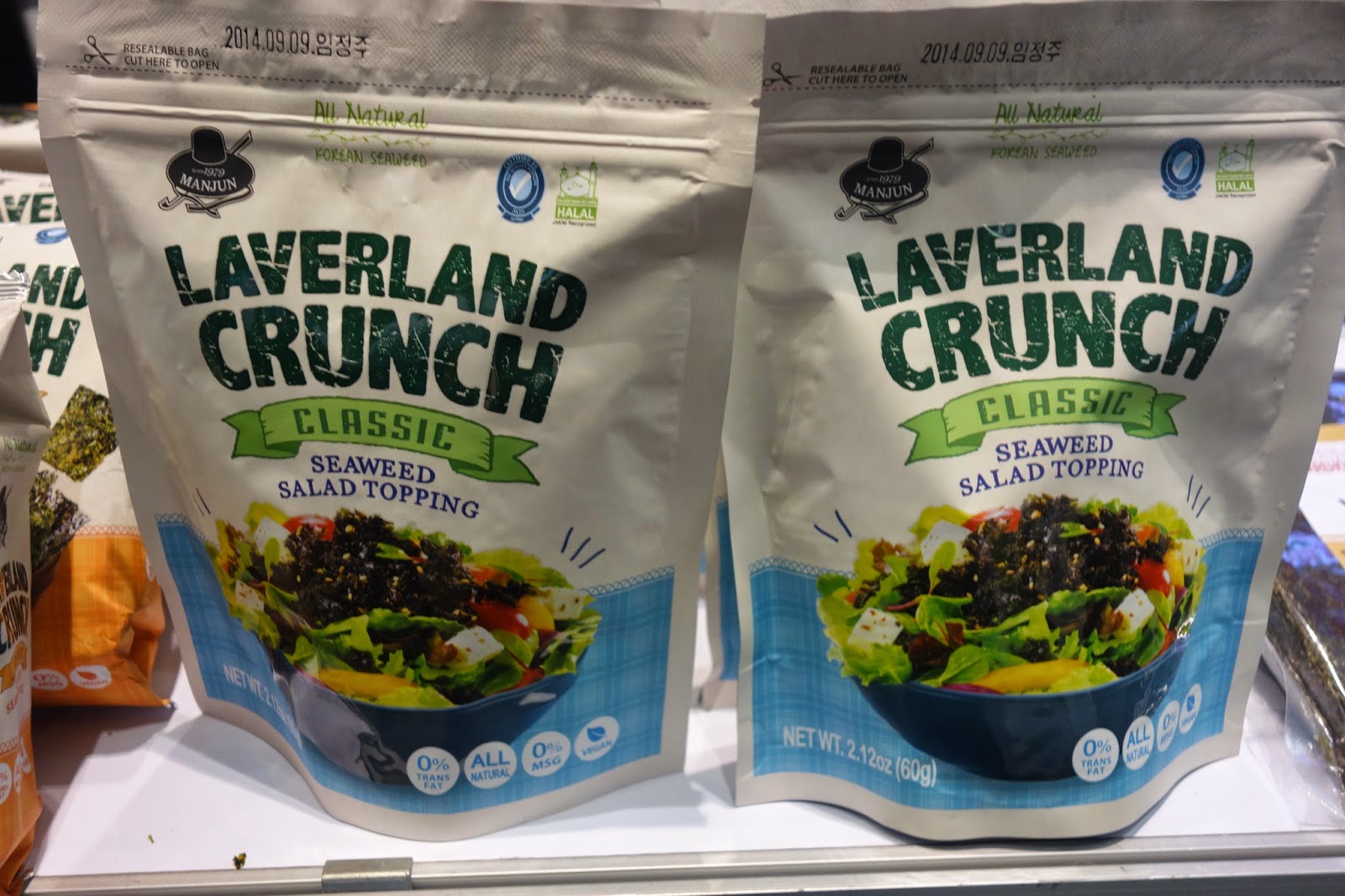 I guess I was on a sea veggie kick at the Expo this year. Another of my favorite foods was from a Korean company, Manjun Foods Co., which is currently seeking a distributor. Their Laverland Crunch products are made from laver, which is what the Japanese call nori, the "seaweed" wrap you find on some sushi. They sell a Seaweed Salad Topping, which can easily be sprinkled on any salad, and I found it to have a flavorful crunch, which would enhance the savoriness of any salad. It is not bland in the least, having a nice, spiced taste. 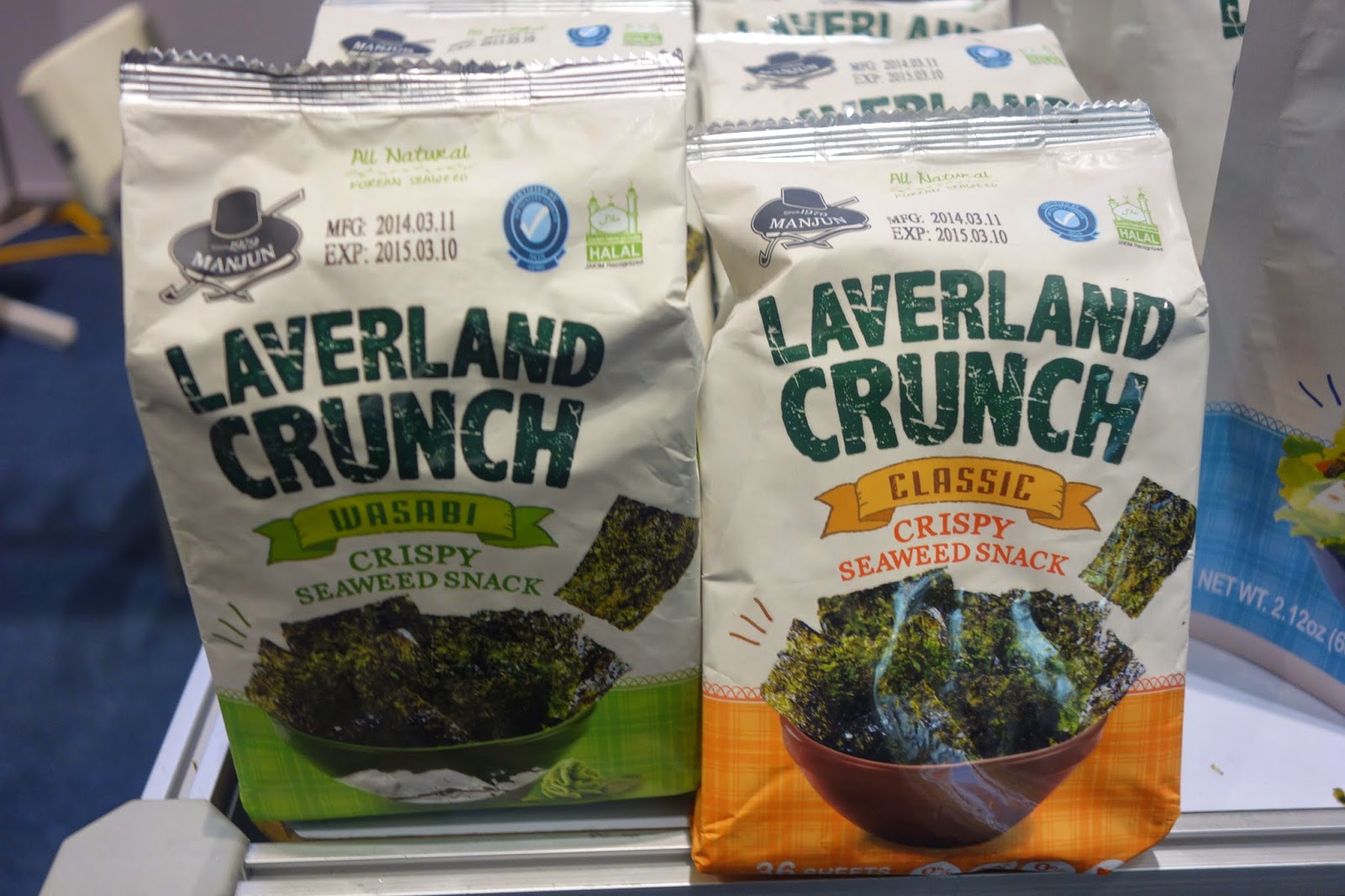 They also sell Crispy Seaweed Snacks, in a Classic flavor as well as a Wasabi. These are thin, square sheets of nori, and I was taken with the Wasabi-flavored one. It was pleasantly spicy hot, with lots of briny, umami flavors too. A very different snack but which you will probably find addictive. 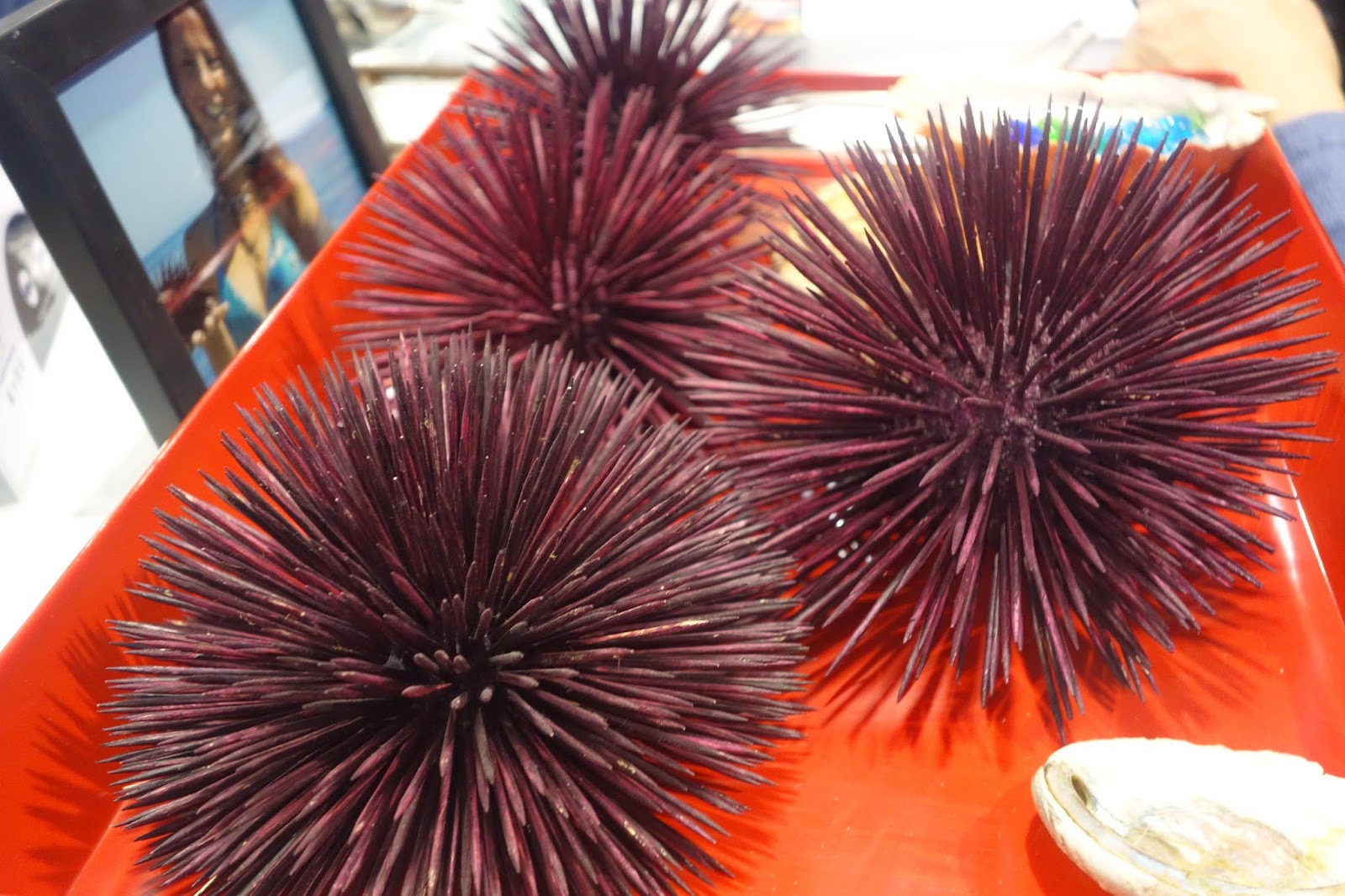 The California Sea Urchin Commission supports sustainable caught sea urchin and has established best practices for divers and processors. Diving for sea urchins generally occurs from on the coast from San Diego to Fort Bragg, and there are about 300 divers, engaged in a rather dangerous profession. It used to be that most of the urchin would be sold to Japan, but about 1/3 of the catch now is sold within the U.S. I do love the rich, briny creaminess of sea urchin. 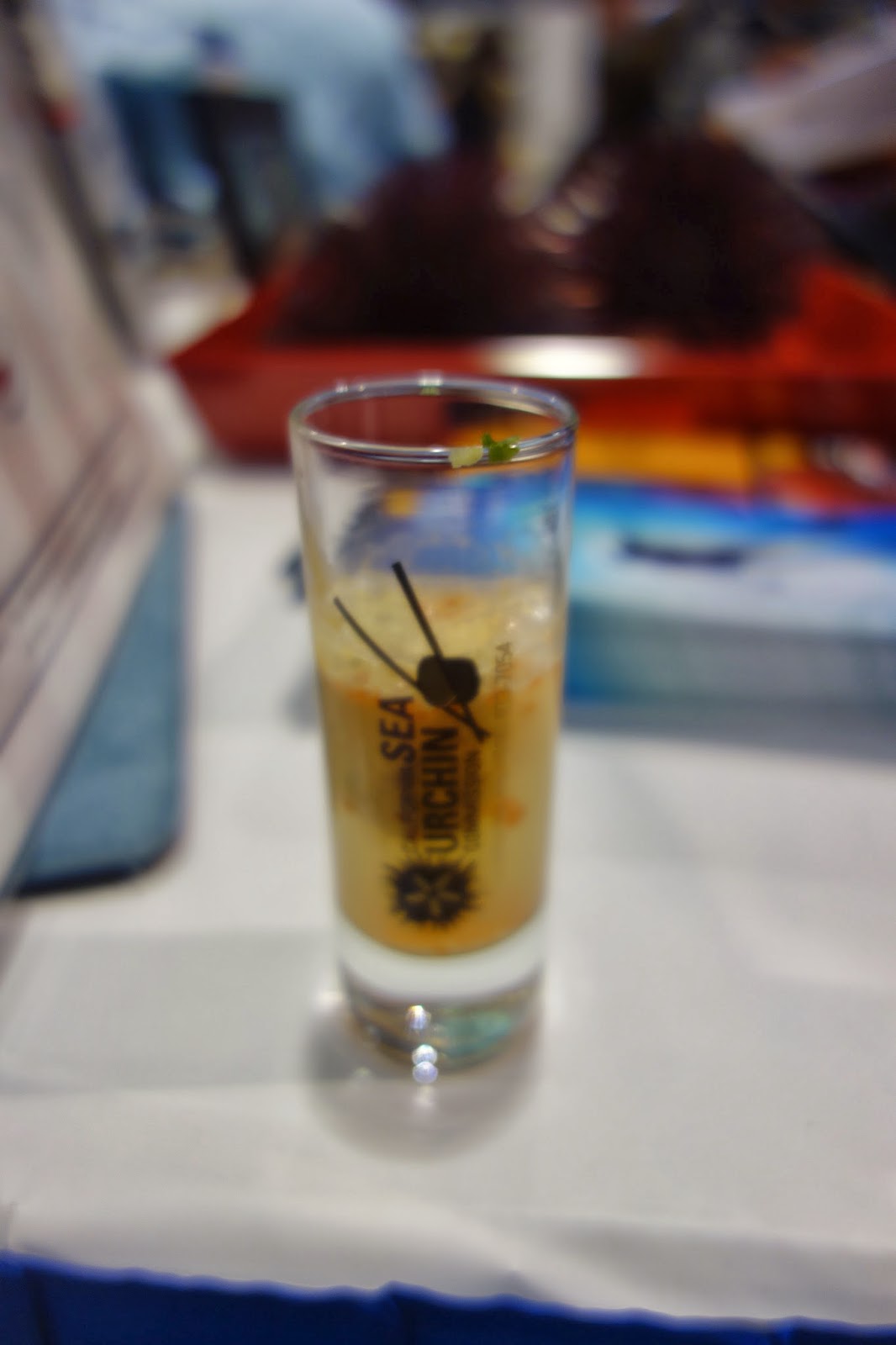 They offered a unique Uni Shooter for sampling, which was made with uni, ginger beer, and wasabi. It made for an intriguing shot, with the ginger flavors enhancing the natural flavors of the uni, and with a spicy kick from the wasabi. These shooters proved very popular with the attendees, and there was a long line when they were offered. 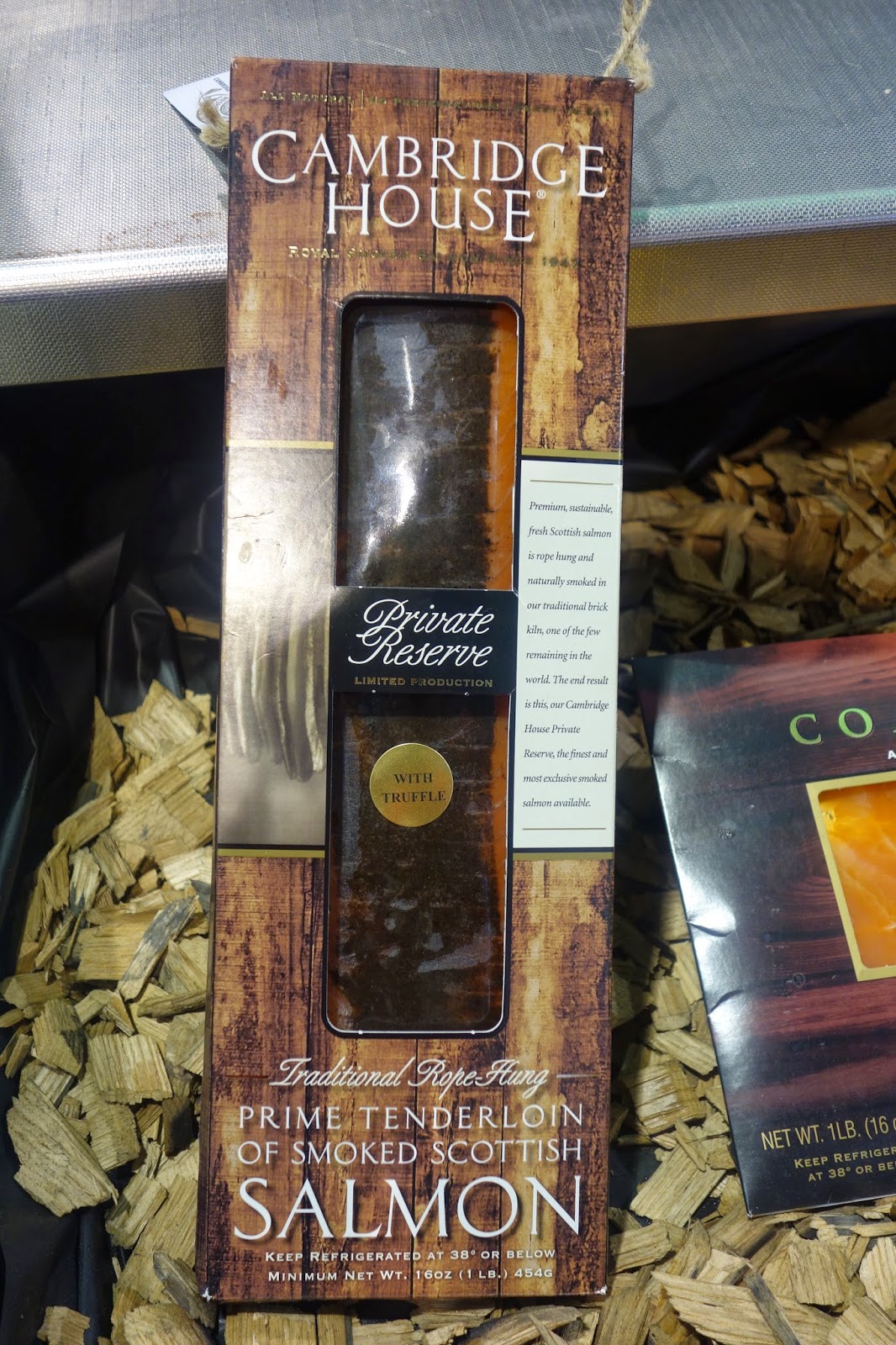 Two years ago, I praised the smoked Salmon from the Santa Barbara Smokehouse, which hangs their Scottish salmon in a brick kiln for a slow smoke. This year, I enjoyed the earthy flavor of their Prime Tenderloin With Black Truffle. This is part of their Cambridge House Private Reserve Traditional Rope Hung Salmon line, and the salmon was meaty and rich, with a light coating of black truffle that enhanced the savoriness of the salmon. It was a decadent addition to an already silky and compelling salmon. 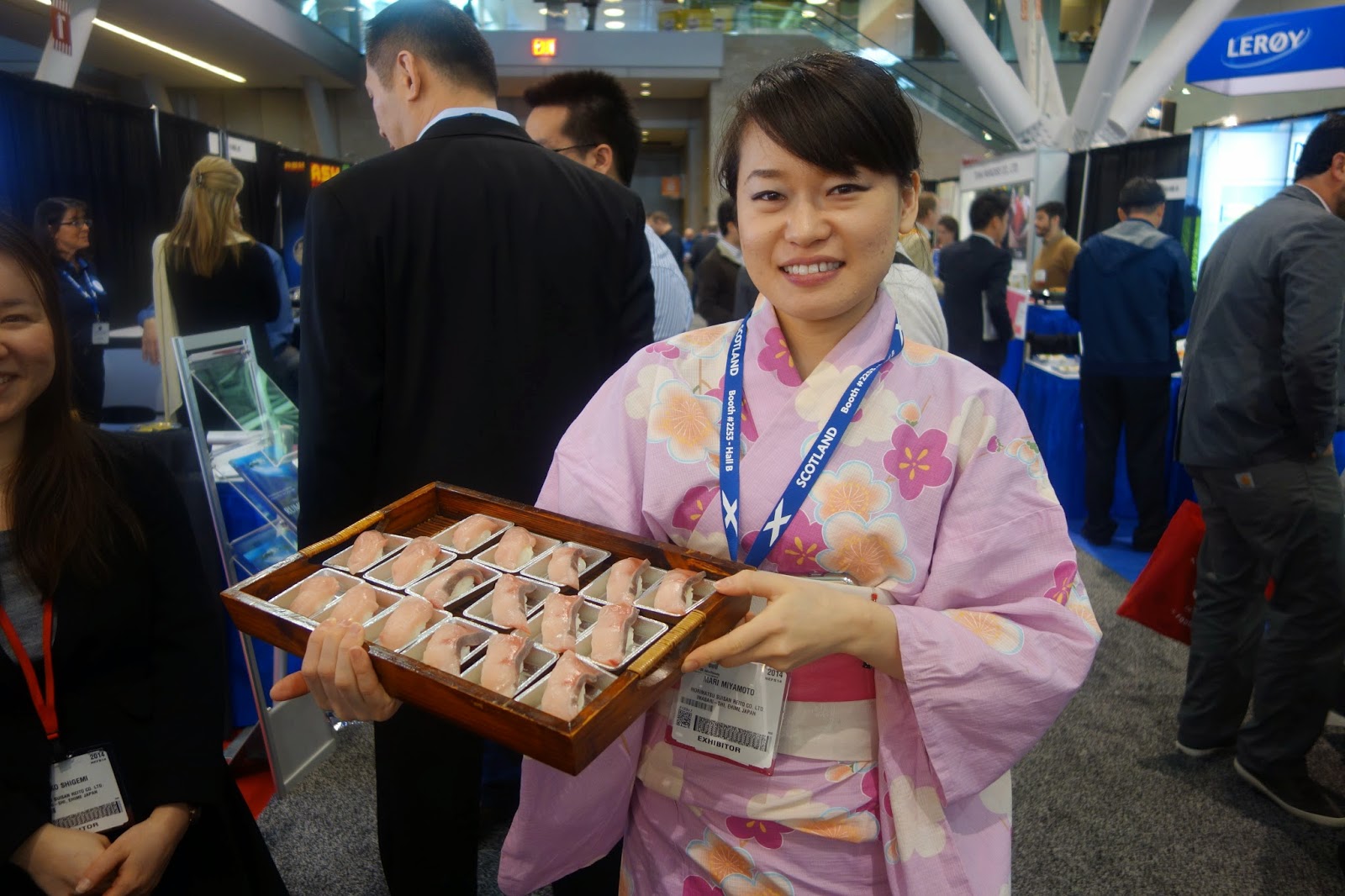 Rumi Japan is a seafood wholesaler and processor, with a large portfolio of different seafood, but their main attraction at the Expo was their Hamachi Nigiri. Rumi Japan uses a special technique, called Ikijime, to prepare their Yellowtail. This is a nerve-removal processing where the head and gut are removed and cut into three pieces. The bones are then removed so only the meat remains and this is supposed to preserve freshness for a very long time. The Hamachi is superb, dense and firm with luxurious fatty flesh. One of the best Hamachi you will taste. 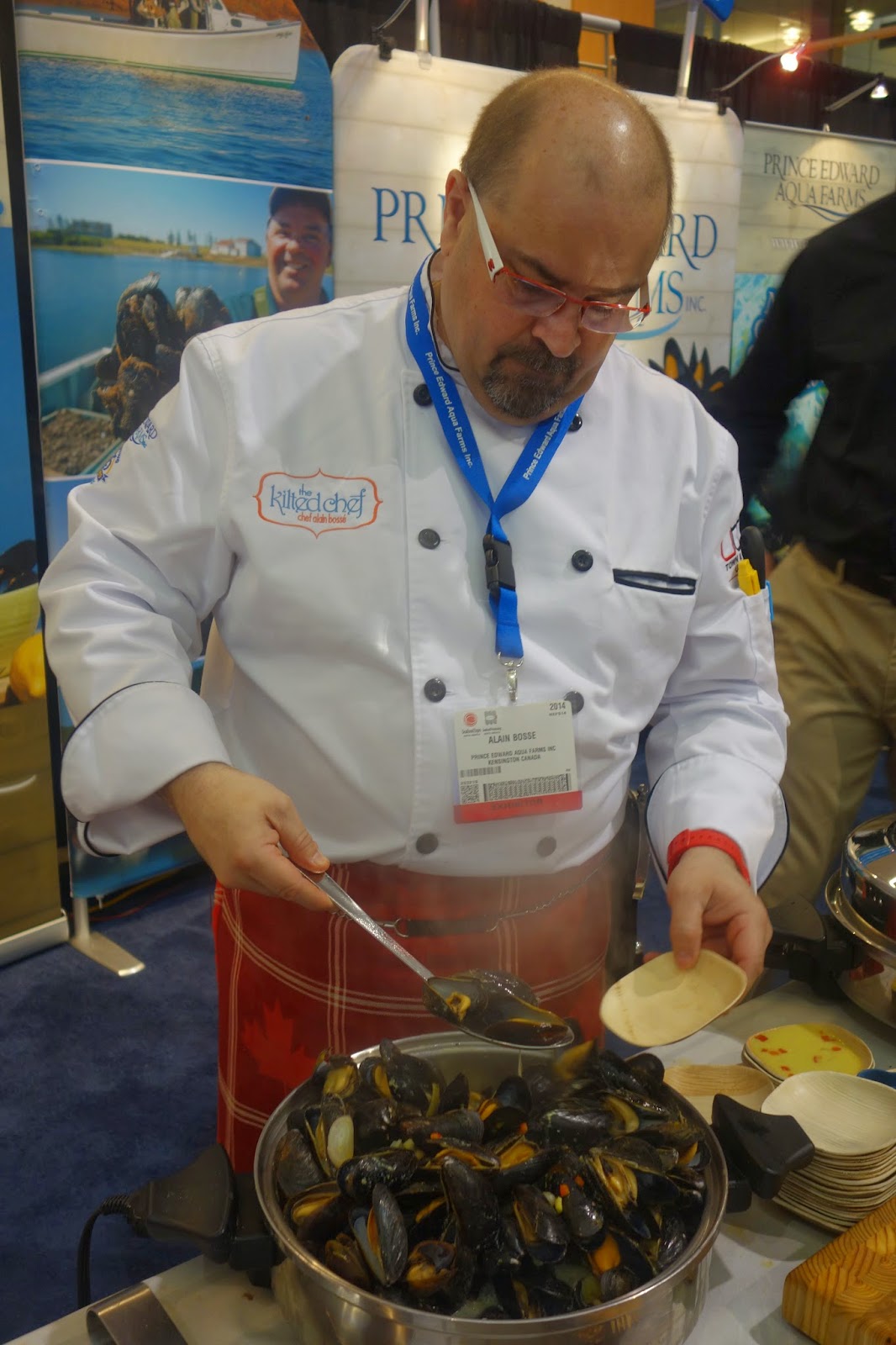 The Prince Edward Aqua Farms presented a kilted Chef Alain Bosse to highlight their mussels. I am a big fan of mussels and the broth is an important aspect of a good mussels dish. Chef Bosse created mussels in a sweet maple curried broth and it was delicious, with a nice blend of spice and sweet. Now, I dislike when maple is too prominent in a dish, but this broth was balanced, and had just the right hint of maple, providing a little sweet. Chef Bosse also has a Mussels cookbook coming out next month. 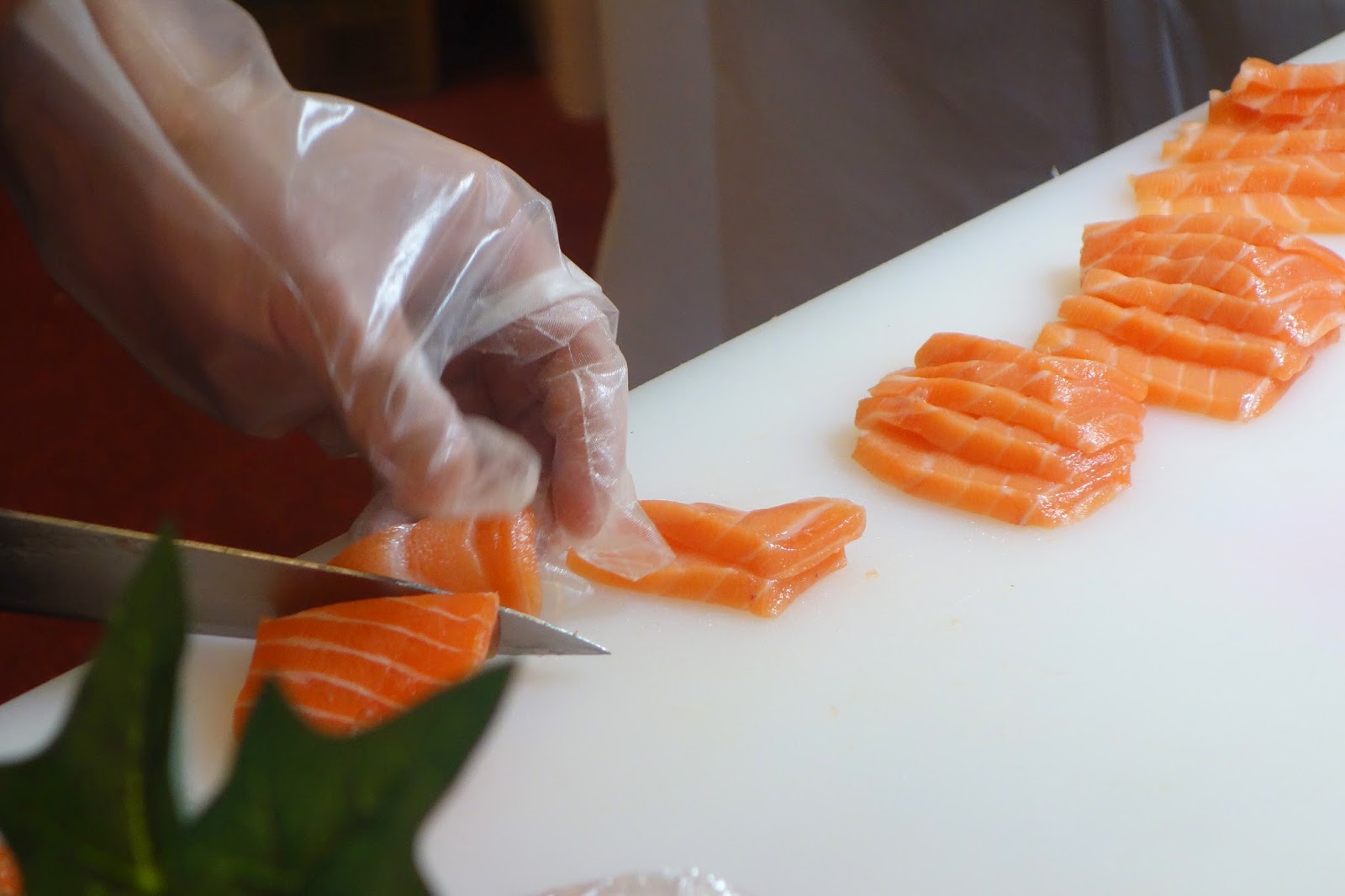 What did you enjoy sampling at the Seafood Expo?

"The fast fish, not the big fish, eats the small fish."
--Ali Babacan
Posted by Richard Auffrey at 2:12 PM