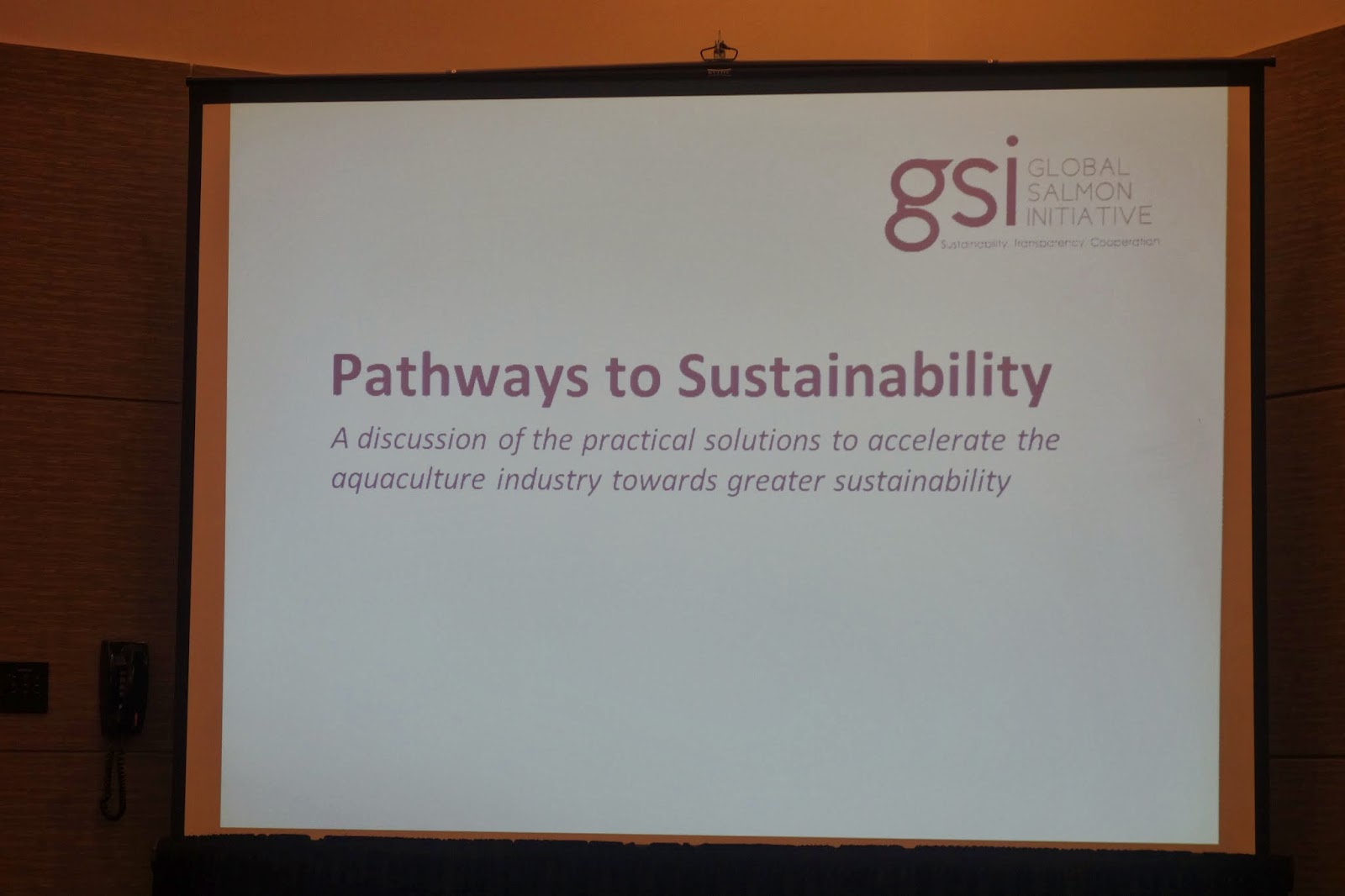 Farmed salmon still has a bad reputation in some circles, though that is often due to outdated perceptions about the industry. Much positive change has occurred, though all will agree that more is necessary. And that was the focus of the last conference session I attended at the Seafood Expo North America. Pathways to Sustainability - A discussion of the practical solutions to accelerate the aquaculture industry towards greater sustainability concentrated on salmon aquaculture and the Global Salmon Initiative (GSI), of which several other conference sessions had already mentioned. The GSI is certainly one of the hottest seafood topics at the moment, many saying that it is a landmark act, a game changer.

What is GSI? Begun in April 2012, it is a "leadership initiative," a partnering of 15 companies, from 5 countries, and covering 70% of the global farmed salmon industry. Clearly, it is a huge undertaking with the potential to affect a substantial portion of the industry. Their goal is to create a more sustainable farmed salmon industry in three areas: environmental impact, social responsibility and economic stability. The GSI also has important partnerships with the WWF and the Food & Agricultural Organization (FAO) of the United Nations. All the members of GSI have also agreed to adopt, by 2020, the standards of responsible aquaculture set forth by the Aquaculture Stewardship Council (ASC) This all seems like an impressive start. 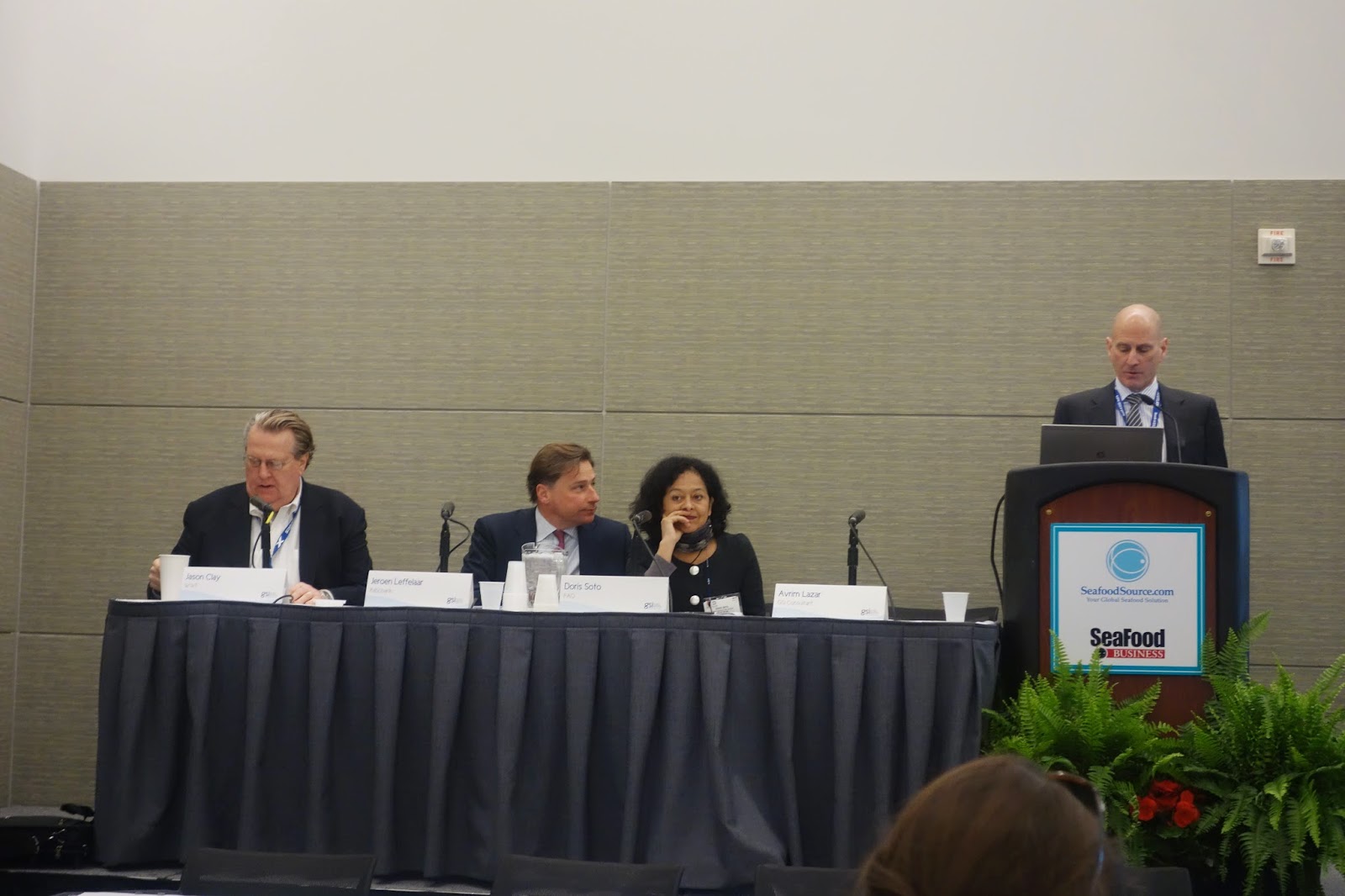 The Pathways to Sustainability conference was moderator by Avrim Lazar, the Principal Consultant to the Global Salmon Initiative, and the three panelists included Jason Clay, Senior Vice President of Market Transformation at WWF; Doris Soto, Senior Aquaculture Officer of the FAO; and Jeroen Leffelaar, the Global Co-Head Animal Protein at Rabobank

Avrim began the session noting the future food crisis as the world population continues to grow, and more and more individuals seek out animal protein. He believes that we need to find ways to accelerate the growth of aquaculture to meet this needs, sooner than later, but also doing so in a way that is sustainable and creates quality. He believes that the GSI is poised to do exactly this, through the power of collaboration. By working together, sharing a collective intelligence, the group can create faster progress than any single company can do on their own. Any discovery made by one company in the group will be shared with all of them. This is certainly a truism in most, if not all, industries, that working together in groups can often accomplish much more, and quicker, than lone companies.

He continued noting that GSI need a framework upon which it could measure its progress so they adopted the ASC standards. They view this as a starting point, with the potential to change in the future if something better arises. Avrim also stated that "food production is part of a system" and that the industry and conversation groups need to work together as they share common goals, and can accomplish more than if they oppose each other. Finally, he noted that "you cannot change without capital." that it all comes down to money.

Jason spoke next and also began noting the potential future food crisis, noting that we need to double our food production by 2050. To battle this, we need to build awareness and consensus. He stated that "everyone who eats is an expert in food." He then began discussing GSI, saying that it is a "game changer." He states that working together, sharing information is important but transparency is necessary as well, with frequent reporting needed. Jason was proud to say that after the initial announcement of the GSI, other industries contacted the WWF to see how they could create something similar. This collaborative idea could spread to other aspects of the seafood industry, as well as other food industries.

Jeroen then told us a bit about the need for banks to finance sustainable companies. The Rabobank was established in the Netherlands in 1898 and most of their international business is now in Food and Agribusiness financing. Like Avrim, he believes sustainability efforts need capital, and that a bank willing to support such endeavors needs to exist. He also made another important point, that third party certifications on sustainability are a necessary tool for communicating with the public. Salmon aquaculture is seen very differently than land based farms, and that is unfair. He pointed out a fish vs a rasher of bacon, noting that the bacon is the less healthy option, but noting that pig farming gets far less of a bad reputation.

Doris spoke about why the FAO is partnering with GSI, noting how salmon aquaculture is one of the most technologically advanced systems in the world. However, technology is insufficient on its own and requires good government in place as well. The FAO is promoting greater aquaculture in Africa, as well as seeking good government there to keep it in place. She also stated that the GSI would lead to better technology dissemination to its member and better management through its ecosystem approach.

There was then a Q&A session, which provided further important information. Jason noted that they had developed processing procedures that would allow them to generate up to 70% of the flesh from a fish, rather than the prior 35%. That doubles the capacity of a fish to provide sustenance, leading to less waste and less need for feed.

Some of the other intriguing bits from the Q&A included:

--Europe is ok with GMM (Genetically Modified Micro-Organisms) but not GMO (Genetically Modified Organisms). That is not something I previously knew and is something I would like to research more.
--Jason stated that certification rewards people who are already better and doesn't help those who are not. However, he still sees it as a good tool even if it is not perfect. He also noted that certification is education for consumers who don't need to know all the details behind it.
--It was raised that sustainability is not black or white, but rather is a spectrum of more or less sustainable. A very important distinction.

After this conference, I followed up some on the GSI, to learn more about what they have accomplished so far. I see much potential in such a large, collaborative endeavor, but wanted to see if it was living up to it or not.

A few of the positive steps they have taken include:
--Using hydrogen peroxide, on a large scale, to treat sea lice
--Starting to remove copper treated nets
--Investigating new feed sources for Omega-3s

As it is a relatively new organization though, you cannot expect miracles over night. It will all take time but GSI is certainly worthy of watching, and hopefully it will be the game changer that some believe. The future food crisis is real, and we desperately need to boost food production. Aquaculture may be that solution, but it must proceed forward in the most sustainable way possible.
Posted by Richard Auffrey at 9:57 AM