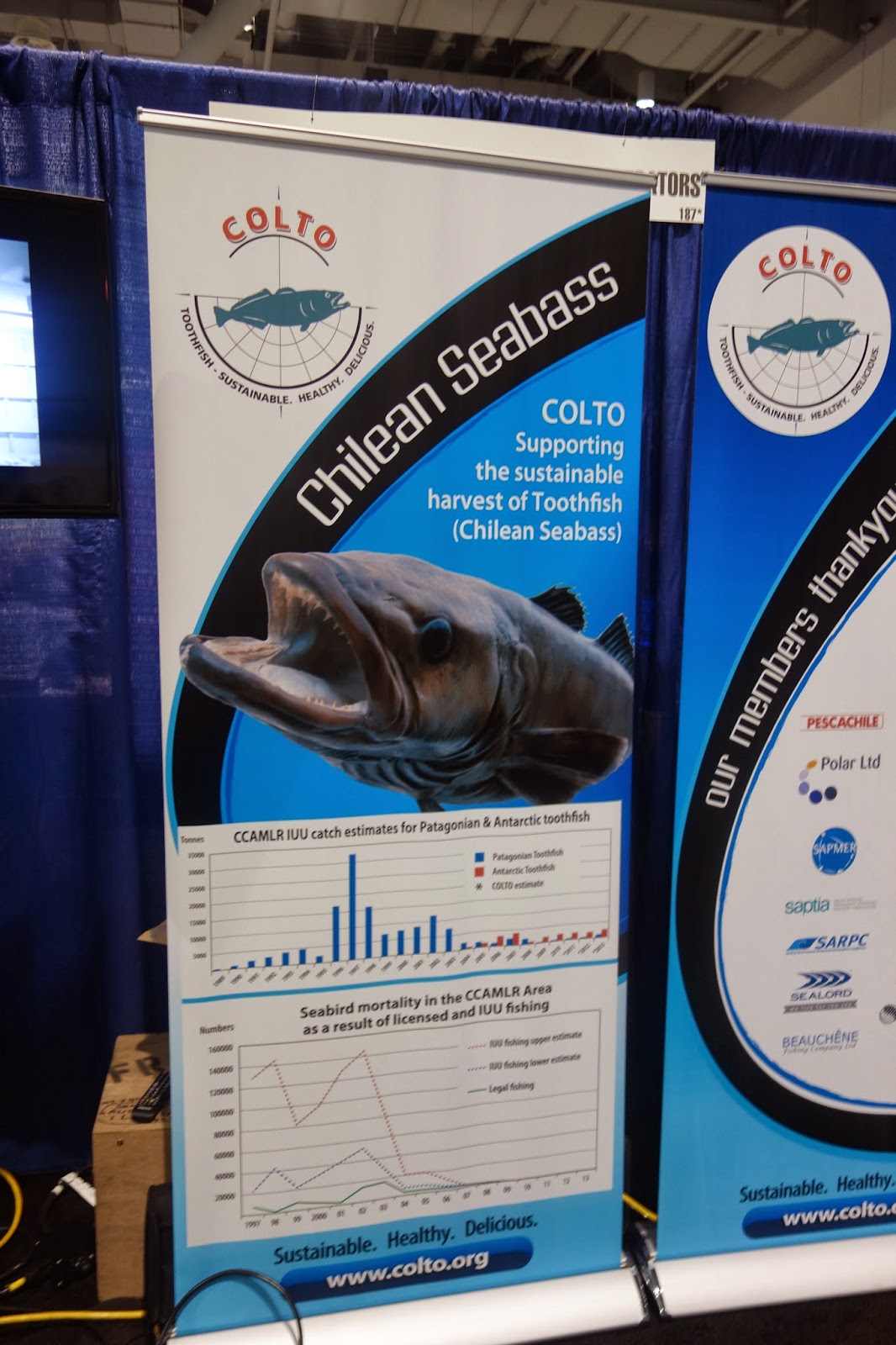 "I know all the symptoms I can expect to experience. I'm especially looking forward to something called the "munchies" stage. It's where one enjoys bizarre food combinations. I'm thinking of pairing this Chilean sea bass with an aggressive Zinfandel!"
--Dr. Niles Crane on Frasier

Over twenty-five years ago, swordfish stocks were significantly depleted by overfishing and ineffective management. In response, the Natural Resources Defense Council (NRDC) and SeaWeb launched the Give Swordfish a Break campaign, calling on consumers not to eat swordfish and restaurants not to serve it. It also pushed for international quotas and the closing of swordfish nurseries in U.S. waters. The campaign was successful and by 2002, it was declared that swordfish had reached 94% of full recovery.

The Chilean Sea Bass, aka the Patagonian Toothfish, saw a similar boycott, and it too has been saved, though I'm not sure that everyone realizes that fact. Currently, Seafood Watch states: "Longline-caught Chilean seabass from the Heard and McDonald Islands, the Falkland Islands and Macquarie Island are a "Best Choice." A number of other longline caught Chilean seabass from South Georgia, Kerguelen Islands, and the Ross Sea are listed as Good Alternative, and that rating includes wild Chilean seabass that is certified by the Marine Stewardship Council. The only Avoid on their list is for longline caught from Crozet Islands, Prince Edward and Marion Islands, Chile. The Best Choice and Good Alternative ratings cover about 78% of the global Chilean sea bass catch. So, you can enjoy Chilean Sea Bass once again, which is a great thing as it is such a tasty fish.

The Chilean Sea Bass is more properly known as the Patagonian toothfish, a type of Cod Icefish that inhabits the waters of the Southern Ocean. There is a related species too, the Antarctic Toothfish, which tends to reside in the colder, more southern waters. Back in the U.S. in 1997, a fish wholesaler, Lee Lantz, decided to rename toothfish so that it would sound more appealing to consumers. after considering a number of alternatives, he eventually settled on Chilean Sea Bass and the name took hold all across the country, as well as Canada, though all other countries still refer to it as toothfish. I guess consumers across most of the rest of the world don't have a problem with the term "toothfish." 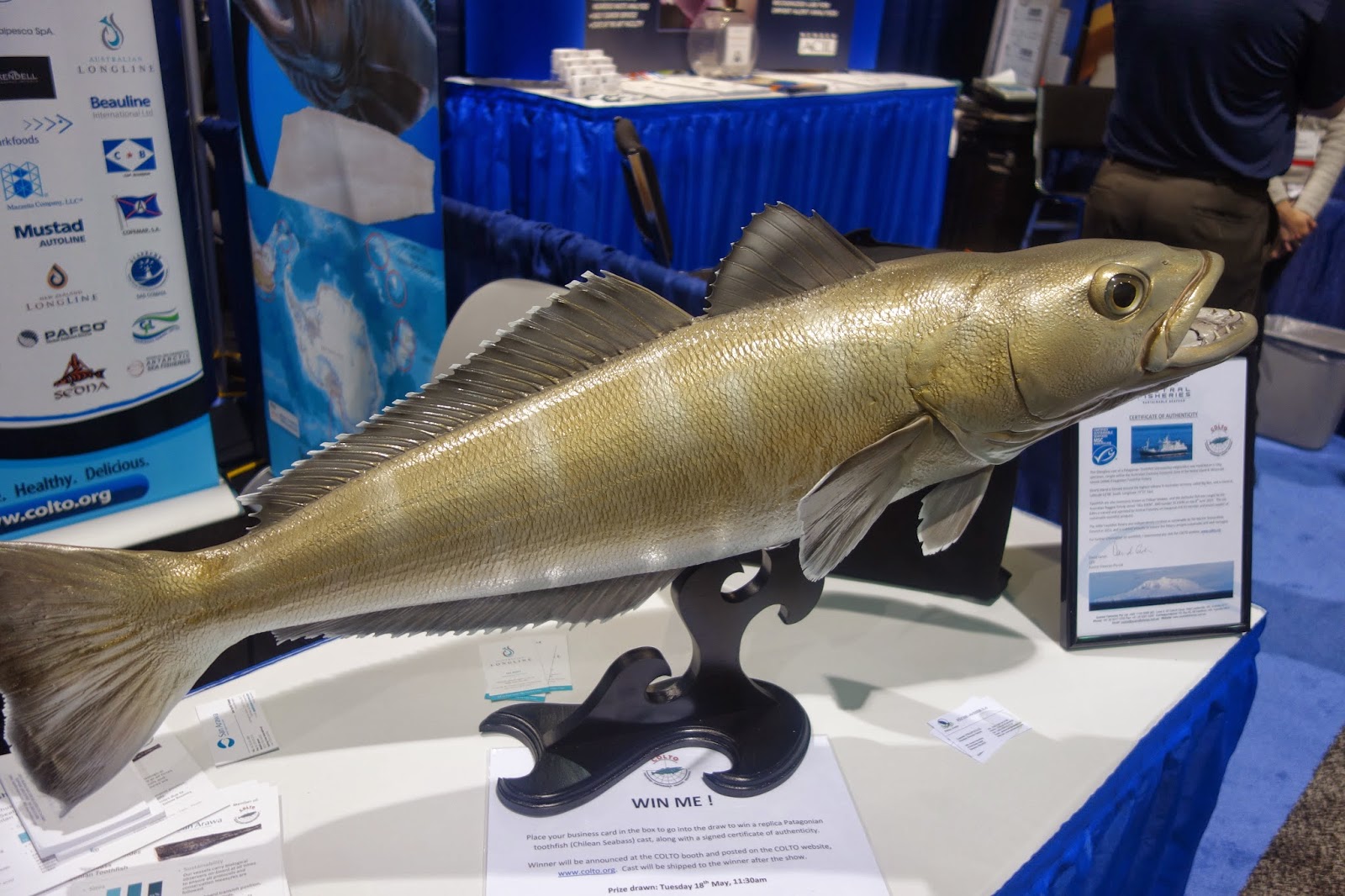 At the Seafood Expo North America, to learn more about the story of the successful comeback of Toothfish, I met with Martin Excel, the General Manager of Policy and Environment at Austral Fisheries, a large, commercial fishing company, located in Australia, which catches Patagonian Toothfish, among other fish. Martin is also the President of the Coalition for Legal Toothfish Operators (COLTO), an organization founded in 2003 hoping to "eliminate IUU fishing for toothfish, and improve sustainability of toothfish stocks." It was a fascinating discussion, and I found Martin to be passionate, knowledgeable and down-to-earth. At his heart, he is a fishermen with a true concern for the preservation of species.

Back in the mid-1990s, Illegal, Unregulated & Unreported (IUU) fishing for toothfish started to be noticed. At its peak in 1997, these pirate fishermen, from over 55 vessels, landed at least 32,000 tons of toothfish. Stocks of toothfish were being significantly depleted, a terrible crisis. Fortunately, the toothfish industry was proactive, pushing to get the fish listed in CITES as an endangered species. Though that didn't occur, it did serve to raise the profile of the problem. In 2002, the National Environment Trust launched the “Take a Pass on Chilean Sea Bass” campaign calling on consumers and chef to not consume or sell Chilean Sea Bass. In what some might see as unusual, the toothfish industry actually supported this boycott.

There was then a collaboration of members of fishing industry, conservation groups, scientists, governments, and the international Commission for the Conservation of Antarctic Marine Living Resources (CCAMLR), seeking to save the threatened toothfish. Working hard, they were successful by 2005 in nearly wiping out IUU fishing, and they haven't stopped their efforts to defeat such piracy. It is believed that maybe 4-9 IUU vessels still remain, generally in warmer, and unregulated, waters, and that they might have caught only 2500 tons in 2013. Most of the illegal harvest is small fish, under 7 kg., that are sold to China.

Martin emphasized that this was a resounding success for a partnership of industry fishermen and conservation groups. Far too often these two groups are at odds with each other, criticizing each other and rarely working together, despite often sharing come common beliefs. If these groups truly want to accomplish something, they need to be willing to talk together, to work together for a common goal. The example of the return of the toothfish proves that it can be successful. Maybe other problems in the seafood industry could be resolved as well if both seafood industry and conservation groups were willing to work as one. 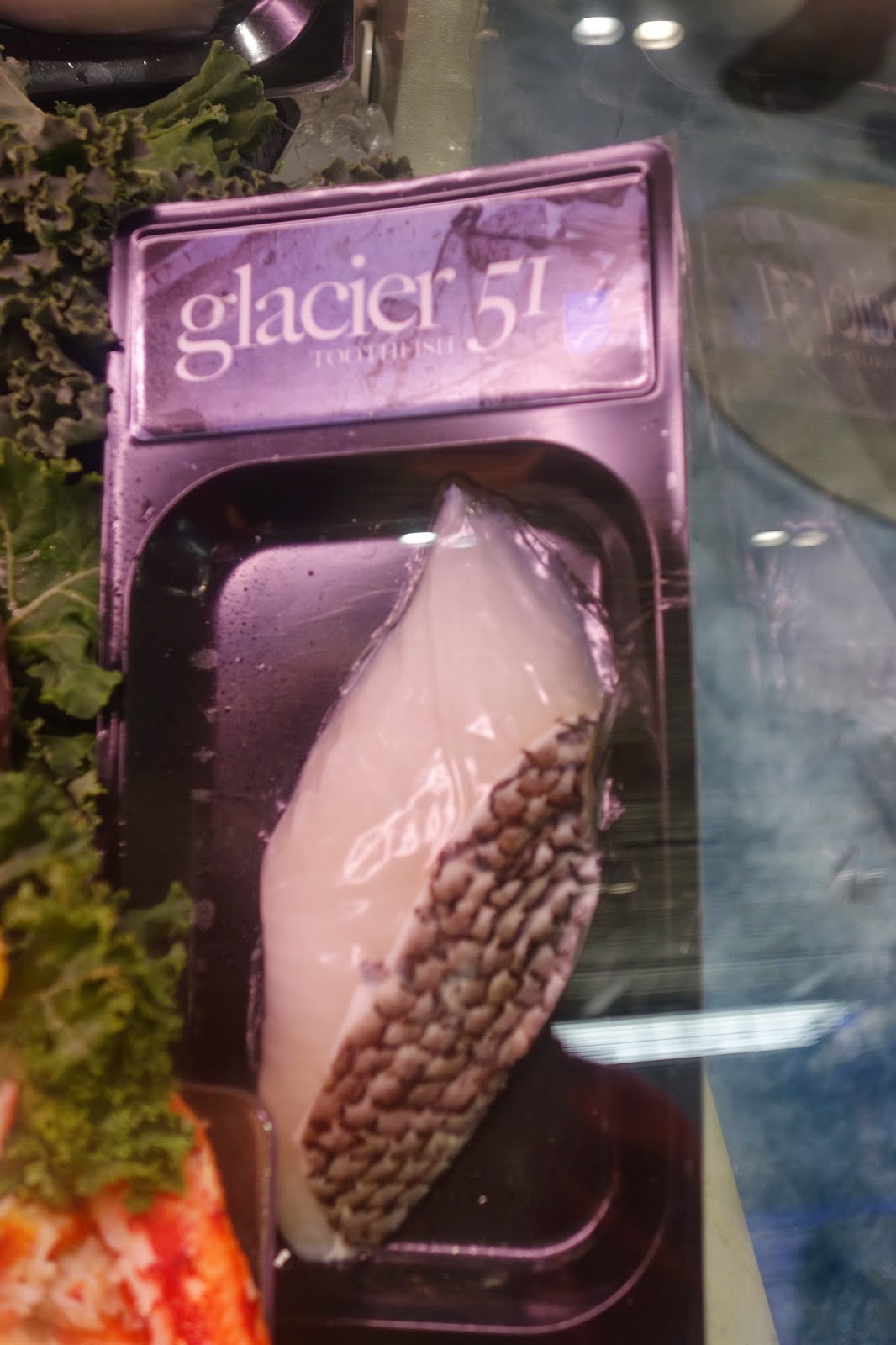 The COLTO organization now numbers 38 members and associates, representing about 80% of all toothfish fishermen. They catch over 85% of the total global legal production of toothfish. The Total Allowable Catches for 2013/2014 was almost 24,000 tons. It is also important to note that 70% of the global harvest of toothfish is now MSC certified or in the process of finishing up certification by the end of 2014. About 35%-40% of COLTO toothfish are sold to the U.S., which prefers medium-sized fish, about 8-12 kg. Larger fish are generally sold to China and smaller fish to Japan. COLTO remains committed to ensuring the sustainability of all toothfish fisheries and eliminating the few remaining IUU vessels.

After most of the pirate fishermen were eliminated in 2005, the toothfish industry had to find a way to rebuild their reputation, to inform consumers, chefs, and others that it was okay to once again eat toothfish. The industry itself wouldn't be believed because they had a vested interest in the results. And people have difficulty trusting the government as well. So, they needed to obtain third party accreditation, to get an independent party, like a NGO, to tell consumers that toothfish was once again sustainable. This is working, albeit slowly, and I know plenty of people who still mistakenly believe that piracy is a substantial problem and that all toothfish should be boycotted. The public needs to know thr truth.

During our discussion, Martin raised an intriguing question: "What is the next step beyond sustainability?" As more and more fisheries become sustainable, as it becomes commonplace, then being sustainable no longer really gives a company a significant competitive edge. They will still seek such an edge, so what will be the driving force of the future? What will help differentiate companies from each other? Though Martin and I had no easy answers, it is certainly a question worthy of further thought and discussion.

As a final bit, Martin told me his favorite way to eat toothfish. He likes to pan sear it, skin down, and semi-poach it with a light sauce of some fish stock, onion, garlic and spring onions. Personally, I like my toothfish with a a Sake Miso Glaze. 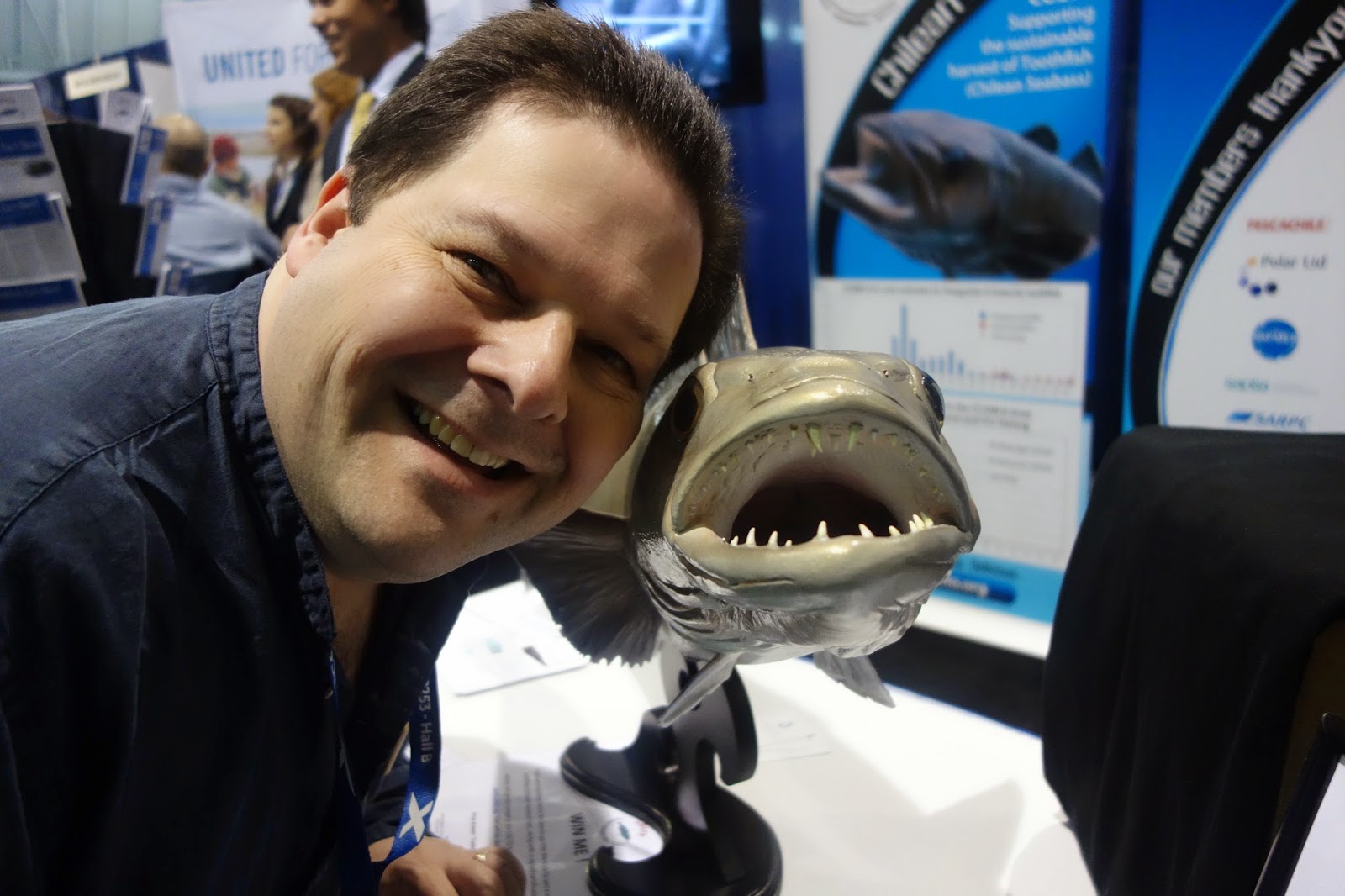 I'm posing with a replica toothfish cast, created to resemble a 13 kilogram Patagonian Toothfish that was caught in June 2013 from the Australian Exclusive Economic Zone, in sub-Antarctic waters around Heard Island and McDonald Islands. They are giving this replica away to an attendee of the Expo, drawing a random name on Tuesday. I'll keep my fingers crossed, hoping I win it.
Posted by Richard Auffrey at 11:08 PM