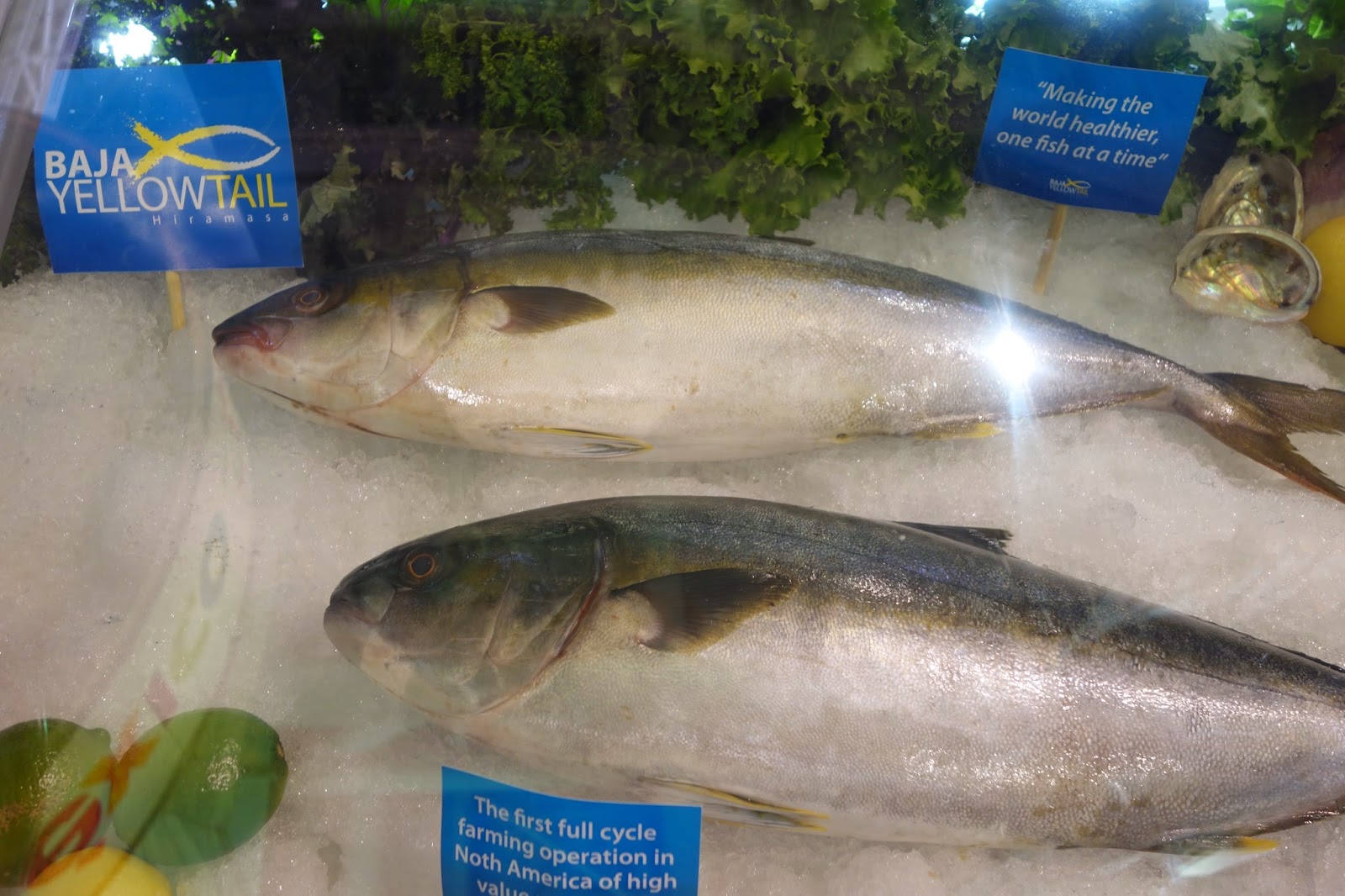 A number of seafood companies bring new products to make their debut launch at the Seafood Expo North America, knowing they will reach the largest audience for a seafood show in North America. I am always intrigued by these new products, seeking out those which I feel have potential and which may show the lead for others. This year, Baja Seas seems to be in the running as one of those pioneers, a company which could lead to a path of greater, sustainable aquaculture in North America.

If you enjoy sushi, you may commonly order Yellowtail, which can be known by a variety of other terms, such as Amberjack, Hamachi, and Kampachi. There are a few different species of Yellowtail, each with their own special taste profile, and the Japanese Hamachi may be the most commonly available as they currently produce about 80% of all Yellowtail globally. The sustainability of Yellowtail also varies, dependent on the specific species and how it is harvested, whether wild or farmed.

According to Seafood Watch, nearly all wild caught Yellowtail, primarily in U.S. waters, is a Good Alternative while farmed Yellowtail from Japan and Australia is an Avoid. As about 75% of all Yellowtail is farmed, that can be a significant issue. One of the most serious complaints about the farmed Yellowtail is the high FIFO ratio. On the other hand, Kampachi, another type of Yellowtail, is farmed in the waters of Hawaii and is considered by many to be a more sustainable choice. There is now a new producer in the waters, seeking to create a sustainable Yellowtail farm in the pristine ocean off the coast of Baja, in Mexico.

At the Expo, I spoke with a few representatives of  Baja Seas, including Luis Astiazaran O., the Director, and they told me about their new operations in the waters of Mexico, noting that they were publicly launching their farmed Yellowtail for the first time at the Expo. Baja Seas conducted extensive research and preparation before beginning their endeavor. They wanted to bring more aquaculture to North America, and also didn't want to select a fish that was a commodity. They didn't want a fish where the price could fluctuate so much. They eventually selected the Hiramasa, a type of Yellowtail, which was native to the waters of Baja. 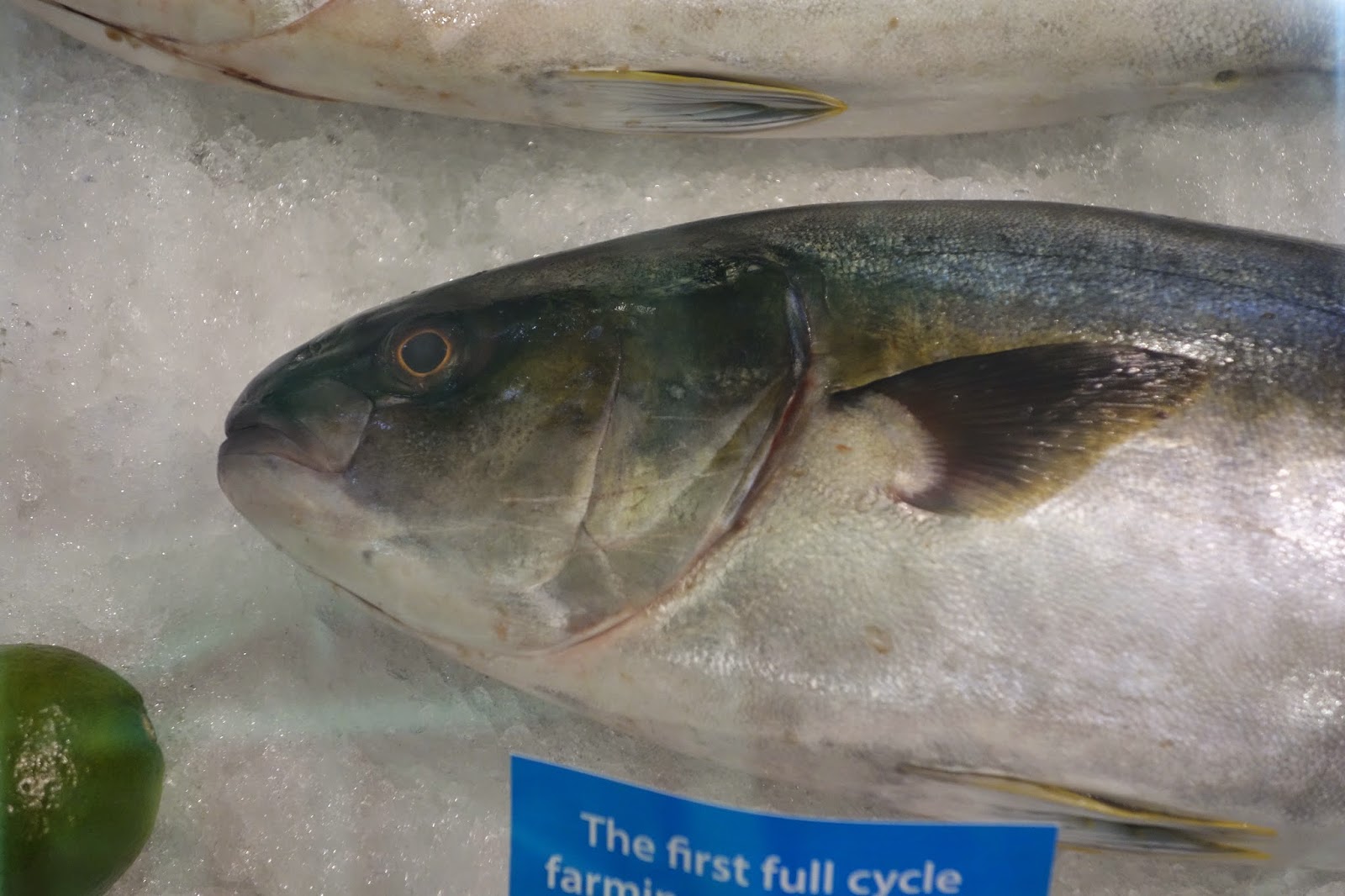 Mexico was a good fit for them as Mexico is very interested in increasing aquaculture in their country, and Luis noted that they have not had any problems with the government in the least. They have constructed a state of the art hatchery near Ensenada. The original fingerlings for Baja Seas came from some produced at Hubbs-SeaWorld Research Institute but now will be sourced from their own hatchery. They use a Recirculating Aquaculture System, which helps limit pollution and disease, and allegedly have a low Fish In-Fish Out (FIFO) ratio, though no one could tell me an exact figure.

Their objective is to be a sustainable operation, and they seem to be doing many of the right things to minimize their environmental impact. They want to be certified as sustainable, but there doesn't appear to be any standards in place for exactly what they are doing. Their operations though appear to be trying to avoid the problems plaguing the Japanese and Australian Yellowtail farmers. They have invested a substantial amount of capital into their operation, and that is one of their biggest challenges, due to the high standards they have set for themselves.

At harvest, the Hiramasa is about 3-4 kilograms on average, and they ship their fish by truck to San Diego for distribution by Catalina Offshore Products. They have been test marketing their fish in limited places, selling the entire fish, wholesale, for about $7 a pound, and $10 per pound to restaurants. Their current production is about 1-2K pounds per week, which they think will eventually top out at 3K pounds. Their Hiramasa is less fatty than Hamachi, more similar to Kampachi, and they have been trying to learn the market though initial reviews of their fish have been positive.

I asked Luis to provide me his top three reasons why consumers should choose his Hiramasa over Japanese Hamachi. First, he stated that it is a more local product, and thus better for the environment with less of a carbon footprint. Second, he stated it is fresher, as it can be to the distributor within 24 hours. Lastly, he stated that the body of the fish is excellent, and the fish itself is fresh, not frozen.

I had the opportunity to taste their Yellowtail, and the flesh was nice and firm, with a silky, buttery taste, though it is definitely leaner than Hamachi. However, there is still plenty of richness in the flavor, and I believe consumers would enjoy its taste. If it is a more sustainable choice, then it is a very worthy addition to any restaurant, market or kitchen.

The question as to its sustainability is still open, especially as it is such a new operation. There are many positive signs in the practices and procedures they seem to be engaging in, and I am hopeful for their future. More information on their feed and FIFO ratio might be helpful. Overall, this is a company to watch for the future, one with potential to lead the way for increased, sustainable aquaculture in North America. I look forward to watching their progress over the next few years.
Posted by Richard Auffrey at 10:43 AM