The Manhattan Cocktail: Then & Now (Part 1) 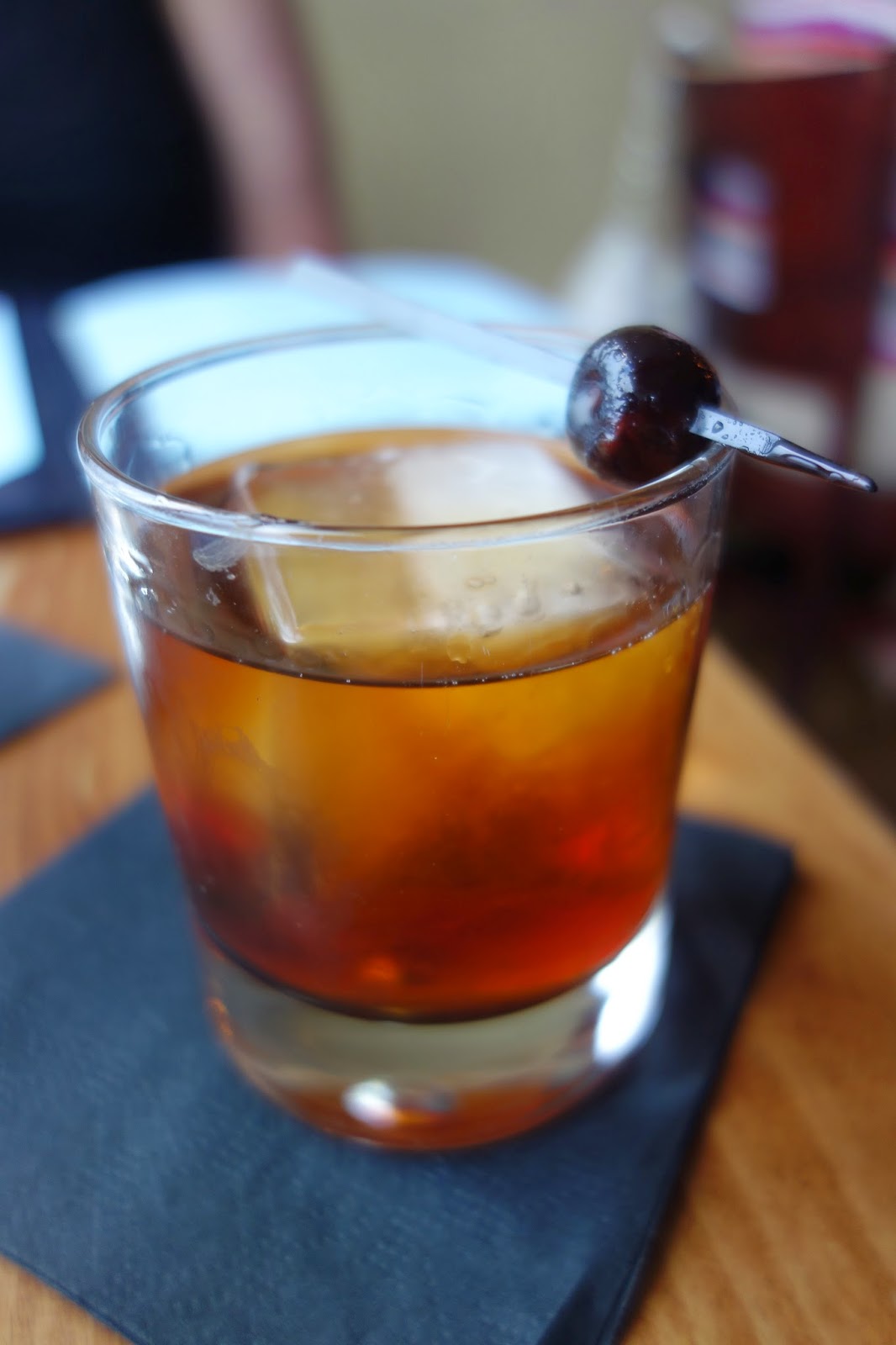 “The Manhattan is a noir cocktail. It has the hue (and taste) of faded red velvet, the cherry glowing like a jab of red neon in the glass. It’s a night-time drink for outsiders. The Manhattan is about maximizing flavor, where the richness of the spirit melds with the dense herbal sweetness of the vermouth and the exotic spike given by the bitters.”
--Whisky: The Manual by Dave Broom

The Manhattan: Whiskey, vermouth & bitters, garnished with a cherry.

While I'm at a restaurant or bar, I love a well-made Manhattan cocktail and enjoy them at home as well. It seems like a simple cocktail, a mixture of whiskey, vermouth and bitters, yet its creation is far more complex than many realize. What provides that complexity are the various permutations of the ingredients, the diversity of the different flavor profiles you will find in each separate ingredient, and the way those ingredients interact with each other. This is the reason why a Manhattan you might create a home can taste very different from the one you last drank at a bar.

Let's first travel back in time, to catch a glimpse of the origins of the Manhattan and understand the ingredients of which it was initially created.

The exact beginnings of the Manhattan cocktail are murky and there are multiple claims to its creation though none have yet to be definitively proven. One of the most popular theories is that the cocktail was invented in 1874 at the Manhattan Club in New York City. Allegedly, Jennie Jerome, the mother of Winston Churchill, hosted a fundraiser for Governor Samuel Tilden and the drink was introduced. However, the evidence seems to indicate that Jennie was actually in the UK, giving birth to Winston, at the the time of this fund raiser so this origin story seems unlikely. At the very least though, the club was significant in the popularization of this cocktail.

Another competing theory is that it was invented at the Trafford Mansion in Hallet’s Cove by Long Islanders waiting for the ferry to Manhattan. Evidence for this theory is also scant. A third theory is that it was created by a bartender named Black in a Broadway tavern, though almost nothing is known about this bartender and again, the evidence is scant. We may never know the true origin of the Manhattan.

Though the Manhattan was probably created in the 1870s, the first known mention of the Manhattan in print appears to have been in a newspaper in 1882 and the first documented recipe appeared in 1884 in O. H. Byron’s Modern Bartender’s Guide. I should note there are some disagreements on when the first cocktail recipe book included the Manhattan, and at least a few different authors and dates have been proposed. However, the currently available evidence tends to support 1884. Despite this controversy, it is easier to discuss the general ingredients and recipes that were used during the early years of the Manhattan.

First, many authorities feel that Rye was probably the original whiskey used in this cocktail. As the cocktail appears to have originated in New York, this makes sense as rye was very popular in the Northeast. In addition, Rye was first distilled in the New York region during the 18th century, the grain doing well in that area's climate. Before Prohibition, there were about 1,200 distilleries in New York, with many producing Rye whiskey. That would all combine to make Rye whiskey the most important and popular whiskey in New York when the Manhattan cocktail was created.

Second, some believe that the Manhattan was one of the first cocktails to use Vermouth as a significant ingredient. During the latter half of the 19th century, when the Manhattan was created, many drinkers tended to prefer sweeter tastes, so adding sweet Italian Vermouth was popular as it catered to those tastes. For even more sweetness, some of the early recipes for the Manhattan also called for the addition of gomme syrup (gum syrup) or other sweeteners. In addition, the earliest recipes for the Manhattan tended to use equal amounts of whiskey and vermouth, unlike the present where whiskey is more dominant in the cocktail.

Third, the bitters in the earliest cocktails varied, though many called for orange bitters or aromatic bitters such as Angostura, or even both. Garnishes varied as well, without any standardization, including items like cherries, olives, and lemon peels. Some early Manhattan recipes even called for the addition of other alcohols, from Curaçao to Absinthe.

We now return to the present, finding some differences in the way Manhattans are created. At its most basic, you'll find plenty of basic cocktail books nothing that a Manhattan is now created with two parts of whiskey, one part of sweet vermouth, a couple dashes of bitters and a garnish of a cherry. However, there are other sources and authorities which vary that recipe, so much depends on which source you consult.

For example, let's compare the recipes for a Manhattan from the United States Bartenders’ Guild (USBG) and International Bartenders’ Association (IBA). The USBG recipe calls for 2 ounces of bourbon or rye, 1 ounce of sweet vermouth, and a dash of Angostura bitters. On the other hand, the IBA recipe calls for 1.69 ounces of rye or Canadian whiskey, 0.68 ounces of sweet vermouth, and a dash of Angostura bitters. Though both recipes mention rye, one mentions bourbon while the other Canadian whiskey. The recipes also call for different ratios of whiskey to vermouth, with the IBA recipe using a larger ratio of whiskey to vermouth. We also see how vermouth has now taken more of a backseat in modern Manhattan recipes, no longer being equal in quantity to the whiskey.

There are plenty of other variations on the Manhattan, some which seem to arbitrarily have a different name though the variation isn’t really that different. For example, the basic Manhattan can be made with a number of different whiskies, including rye, bourbon and Canadian whiskey. Yet, when Scotch is used, it is called a Rob Roy. If rye was the original whiskey, why doesn’t using bourbon or Canadian whiskey give the cocktail a different name but Scotch does? It is an arbitrary decision.

The Manhattan Cocktail is awesome and so are the nyc escorts. One must not miss this golden opportunity while they are in NYC.