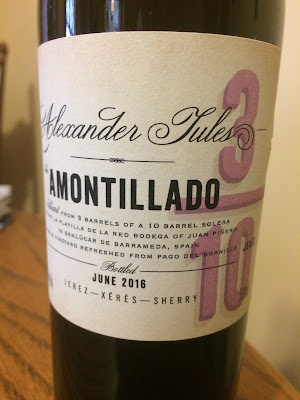 Did you enjoy Sherry on Thanksgiving? Since 2010, I've advised people to be more adventurous and drink Sherry on Thanksgiving because it is both delicious and pairs well with the various foods on your table. Not enough Americans drink dry Sherry, with sweet Sherries being far more prominent. However, it is the dry Sherries which pair so well with a wide range of foods. Besides giving this advice, I usually follow it as well, and this year brought an Amontillado Sherry to the Thanksgiving table.

Fortunately, I received a media sample in time for the holiday, one of the newest selections from Alexander Jules. Alexander Russan, the founder of Alexander Jules, is similar in some respects to a negociant, visiting Sherry producers and cellar owners and carefully selecting some of their barrels to create a special Sherry. I previously reviewed the first three of his Sherries, as well as provided more info about his company and you should check out my article for additional background on Alexander Jules. Those three Sherries made my 2014 list of Top Ten Wines Over $15. Last year, I reviewed his Los Abandonados 6/8 Oloroso and it made my 2015 list of Top Wines Over $50. And earlier this year, I reviewed his Fino 4/65, and I'm positive it will end up on one of my Top Wines of 2016 lists coming later this month.

The Amontillado 3/10 (about $40/500ml) is intended to be a younger Amontillado and was sourced from Bodegas Juan Piñero, located in the port city of Sanlúcar de Barrameda. Sanlúcar is an ancient city, located on the left bank of the mouth of the Guadalquivir River. Until the beginning of the 19th century, the wines of Sanlúcar were generally not considered sherries. However now, Sanlúcar is the only city in Spain which can legally produce Manzanilla sherry, and has its own Denominación de Origen, called Manzanilla de Sanlúcar de Barrameda.

Juan Piñero, who made his wealth in the construction industry, eventually decided to enter the sherry business. Around 1992, Piñero purchased an old bodega in Sanlúcar so he could produce Manzanilla. In addition, he purchased numerous barrels as well as high quality sherry. In 2000, he purchased another bodega, along with barrels of the famed Maruja Manzanilla (which were moved to their original bodega). Piñero, in 2007, bought another bodega, which included barrels of Oloroso sherry. For most of this time though, he sold his Sherry to other bodegas, including La Gitana and Argüeso, but in 2013, he finally decided to began selling his own brand, the first being Manzanilla Maruja.

Russan has worked with Piñero before in producing Sherry, and continues to do so for several reasons. First, Russan finds Piñero to be very responsible, conducting his business in a timely fashion. Second, Piñero manages the bodega in a very traditional fashion, which Russan really likes. Third, Piñero hired Ramiro Ibañez to be his consulting capataz and Russan feels he is a "genius of the Sherry Triangle." Russan stated that when he works with Ibañez, his understanding of sherry is greatly expanded. Finally, Piñero has many different styles of sherry and Russan finds good variation in the barrels, allowing Russan to create more unique sherries.

Russan's concept behind this Amontillado was to make a sherry in a similar style to his previous Amontillado. He wanted it to be "younger, yet complex and complete, still showing Manzanilla character, and softer oxidative qualities." He tasted through the scales/criaderas from the Maruja Manzanilla solera, until he found the point in development that he wanted for his new Amontillado. This Amontillado has an average age of about 18 years, though he feels he tastes younger, more like a 12-15 year old.

It was bottled with only a rough plate filter at the bodega, mainly to remove any large pieces of material that might have been in the barrels. As for food pairings, Russan suggested the Amontillado would pair well with Chinese food, Indian food (curries), Mexican food (Oaxacan cuisine—more spiced dishes), and probably even steak.

After drinking this sherry, I think Russan created exactly the type of sherry he desired, an intriguing blend that presents beautiful Amontillado notes but also hearkens to the nature of a Manzanilla. It reminded me of snacking on almonds and pecans, lightly drizzled with caramel, while sitting on the beach, with the brininess of the ocean wafting over me. It is a lighter style sherry, with a complex melange of flavors, including lots of nuttiness, mild caramel notes, a strong briny nature, subtle hints of citrus and a lengthy, pleasing finish. Everything is well balanced and harmoniousness, and it is an Amontillado which should please most anyone. I think it paired very well with the various Thanksgiving dishes and could easily see this working well with a wide variety of cuisines.

Russan has created another winner and I highly recommend you check out all of the Alexander Jules sherries.
Posted by Richard Auffrey at 10:15 AM