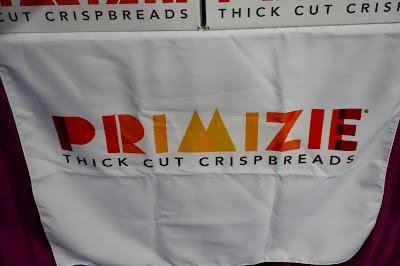 As I mentioned in my prior post, Boston Wine Expo: Food Finds, I enjoyed the Primizie Thick Cut Crispbreads. Coming in a variety of flavors, they gave away free bags of their crisp breads, plus coupons, at the Expo, although they didn't showcase all of the flavors they made. Primizie also sent me media samples of some of their other flavors. Overall, I continued to be impressed with these crispbreads and would recommend them as a tasty and versatile snack. 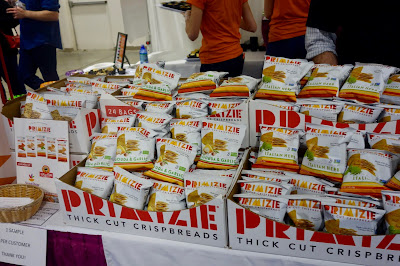 Primizie Thick Cut Crispbreads was founded by Mark & Lisa Spedale, and its origins extend back to 2001 when Mark founded Primizie Catering. A trip to Italy would help inspire the idea for the crispbreads, as they sought a way to use leftover bread with hors d'oeuvres. The bread would be grilled, crisped and then sliced into smaller triangles. In 2011, they started selling these crispbreads to retailers and the company has grown since then, now available nationwide.

These crispbreads are intended to be healthy, lacking artificial colors, artificial flavors, and preservatives. They continue to be grilled, crisped and hand-cut, while the seasonings for each variety are mixed into the dough. The only area of their FAQ which doesn't appear to be correct is the section, Minimal Ingredients, which states "All Primizie products are made with fewer than six ingredients." For example, the Ancient Grains and Gouda & Garlic flavors are made with more than six ingredients. It isn't a major issue though as if you consult the ingredients list, it is clear why those ingredients were added and they don't appear to be anything you wouldn't want in such a snack. 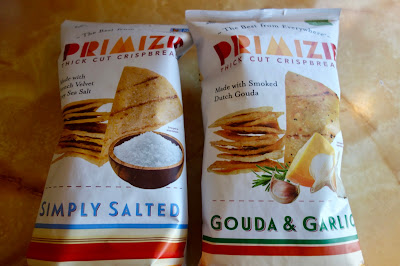 The Simply Salted is their basic version, made from only four ingredients including wheat flour, sunflower oil, salt (Sel Gris, French Velvet Grey Sea Salt) and yeast. The "chip" itself is thick and sturdy, able to stand up to any dip without breaking or wilting. You could also stack other ingredients atop it to make your own hors d'oeuvres. All of their flavored crispbreads are equally as thick and sturdy, which is an advantage. The Simply Salted has a mild, buttery taste, enhanced by the salt, and make for a nice snack on their own, though the addition of some salsa or cheese dip works well too.

The Gouda & Garlic, made with Smoked Dutch Gouda cheese and roasted garlic, adds more flavor to the basic crispbread, with plenty of smoky cheese flavors and lots of garlic. There is a intriguing tang to the flavor which elevates these snacks. I really enjoyed these on their own, though they too would work with plenty of dips. 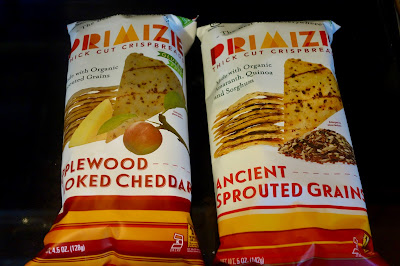 The Applewood Smoked Cheddar brings a different cheese flavor to the crispbreads, though there is still that smoky edge. Maybe my favorite flavor was the Ancient Sprouted Grains, made with organic Amaranth, Quinoa, and Sorghum plus poppy seeds, caraway seeds, and organic molasses. I loved the rich nuttiness of these crispbreads, a satisfying blend of flavors which were perfect on their own, though topped with cheese they were also excellent. As healthy as these crispbreads are, they still possess a compelling taste which will appeal to anyone. 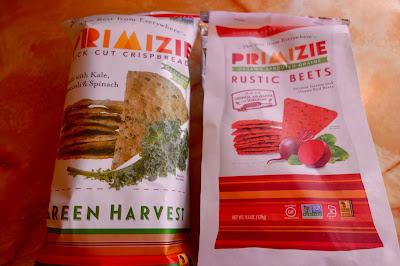 Their crispbreads get even healthier, with the Green Harvest (made with Kale and Spinach) and the Rustic Beets (made with beets). These aren't flavors that usually attract me, though the crispbreads actually didn't totally turn me off. And those who like those flavors really enjoyed these crispbreads.

You'll also find Primizie in other flavors, including Italian Herb, Chile & Lime, and Dolce Caramel. If you're looking for a new snack to try, one that is healthy but still tasty, then pick up a bag or two of Primizie Thick Cut Crispbreads.
Posted by Richard Auffrey at 10:20 AM