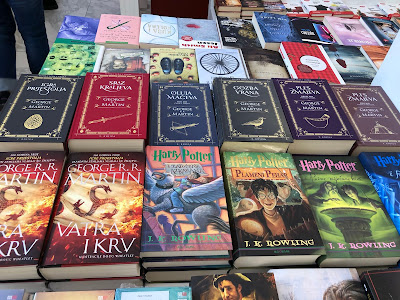 Some of the rest of my free time in Zagreb was spent wandering around the city, and doing a bit of shopping. One of my goals was to acquire a new hand-made hat, and I was successful. During my wanderings, I also saw a number of interesting sculptures, which seems to be indicative of their love for art, as well as their desire to honor numerous individuals.

Above, at a local bookstore, I saw copies of the various Game of Thrones novels, by G.R.R. Martin, in Croatian. Plus, there were Harry Potter novels in Croatian. I wouldn't be able to read any of these books, but they certainly looked cool. 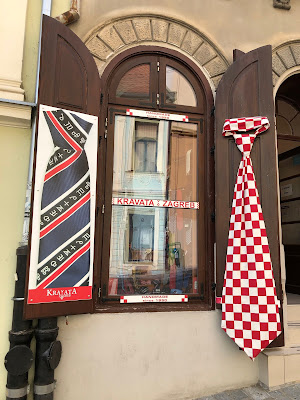 As I've mentioned before, Croatians invented the necktie, the cravate, which was basically a scarf tied in a knot around their necks. In 1635, the cravate wearing Croatians impressed King Louis XIII of France who helped to launch the fashion for the rest of Europe. So, there are plenty of shops in Zagreb where you can purchase ties and cravates. 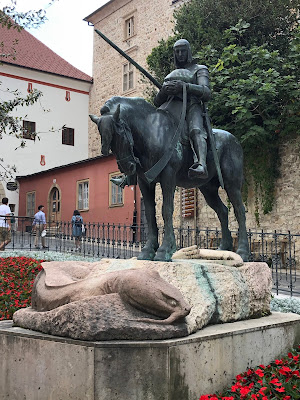 There are two different statues of St. George and the Dragon in Zagreb. The above statue, created by Austrian sculptors Kompatscher and Winder, is located near the Stone Gate, showing St. George paying his respects to the slain dragon. The statue was originally displayed in Austria but in 1937, it was gifted to a person in Zagreb, and has been in its current location since 1994. 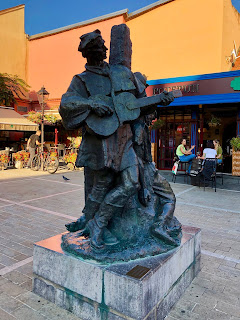 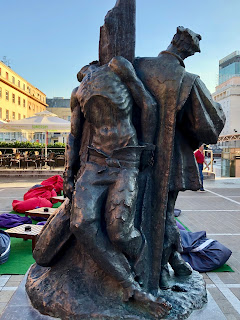 This is a bit of a strange bronze sculpture. Created by sculptor Vanja Radauš, it primarily depicts Petrica Kerempuh, known as Croatia's National Jester. He was a popular entertainer as well as a cynical commentator on current events. In folk stories, he was considered to be a wandering trickster, carrying a mandolin. However, I'm unsure why there is another figure (and who is represents) in the sculpture, a figure that appears to be possibly dead. My preliminary research didn't uncover that info so I need to go deeper. 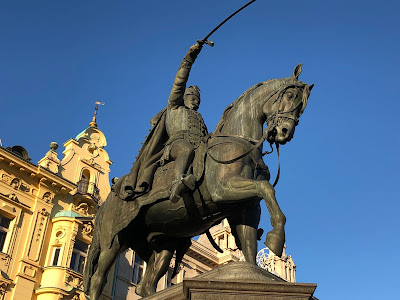 In Ban Jelačić Square, the central square of Zagreb, located near the Dolac Market, you'll find this equestrian statue of Ban Josip Jelačić, who ruled from March 1848 to April 1859. The statue was created by Austrian sculptor Anton Dominik Fernkorn and put in place in 1866. In 1947, Yugoslavia chose to remove the statue from the square and it wasn't until October 1990 that the statue was restored to its place in the square. For Croatians, Jelačić is considered a positive historical figure,  though Hungary has a much different view of him. 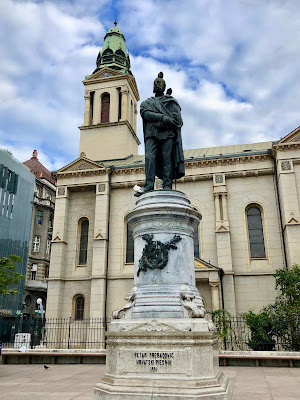 The pigeons voted and this is their most popular statue! Created by sculptor Ivan Rendić, this statue represents Petar Preradović, a famous general as well as a poet and writer. This is considered to be Ivan's best work. The statue, which was emplaced in its current location in 1956, also represents "freedom on the square." 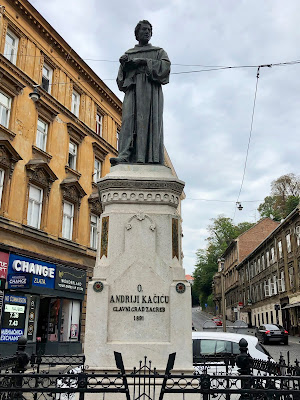 This statue was also created by Ivan Rendić, and depicts Andrija Kačić Miošić, an 18th century Croatian poet and Franciscan friar. Zagreb seems to embrace and honor many poets and writers. 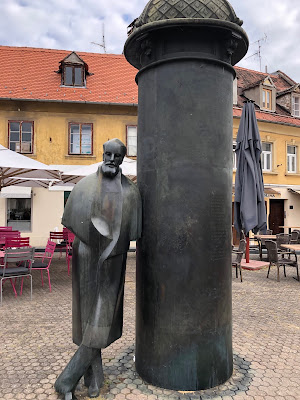 Another writer who was honored with a statue, created by Marija Ujević Galetović, was August Šenoa, a 19th century Croatian-language novelist who also introduced the historical novel to Croatia. 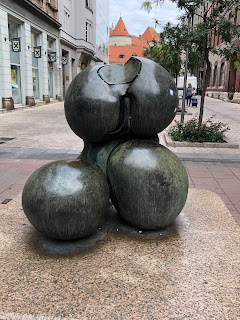 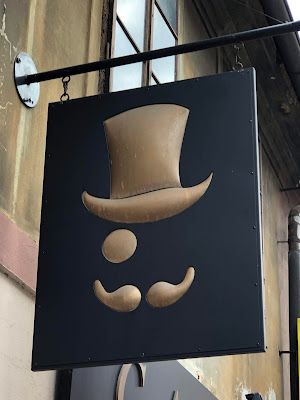 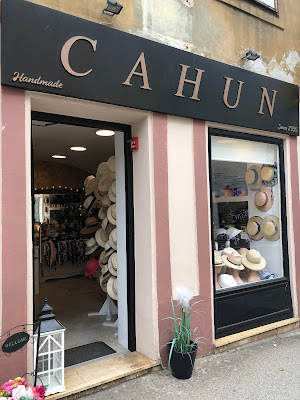 Cahun, a family business, was established back in 1935 and is presently owned and operated by Josipa Cahun. They make various hats by hand, following old techniques that have been passed down through the generations. They sell various other hats as well, including some not made at the store like Panama hats. If you love hats, this is certainly a destination for you. Prices are commensurate with the high quality of their products. 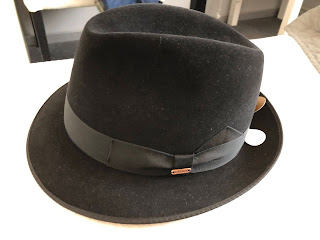 I knew I wanted to own of their hand-made hats and eventually selected, after much indecision over the exact style and color I wanted, this black fedora. Looking forward to wearing it this fall and winter. 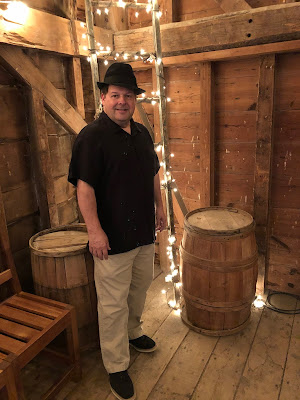 Earlier this week, I had my first opportunity to wear my new hat, to an outdoor chef's event, and I was very pleased with my look, a memory of Croatia that will always remain with me.
Posted by Richard Auffrey at 3:00 AM