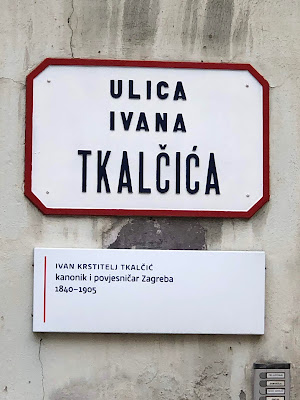 Upon my Friday afternoon arrival in Zagreb, after 16 hours in airports and airplanes, I was a bit tired from minimal sleep. Though a nap sounded good, I simply freshened up at my B&B and trekked out into the city. My time in the city was limited so I didn't want to waste any time sleeping. I wanted to immerse myself in Zagreb, to feel its culture and history, to interact with its people. I wanted to gain some understanding of what it meant to be Croatian. I began my explorations by wandering down the famed Tkalčićeva Street. 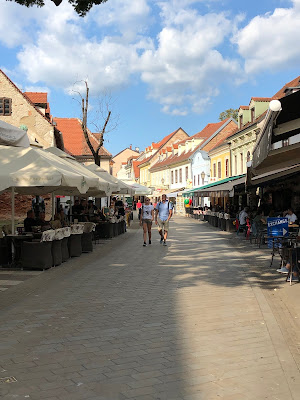 Known locally as Tkalča, it is a lengthy and curvy street filled with restaurants, cafes, bars, and small shops. It's a major tourist destination, and as you walk down the street, past many other people walking along, you see plenty of others sitting at the various outside patios enjoying drinks or food. This busy thoroughfare is much quieter in the early morning, though you'll see plenty of employees cleaning the area, their patios, and store fronts. Despite being touristy in some respects, there is much else of interest here, from intriguing sculptures to historical items. If you visit Zagreb, you definitely should check out Tkalčićeva Street, and be sure to keep your eyes out so you don't miss anything. 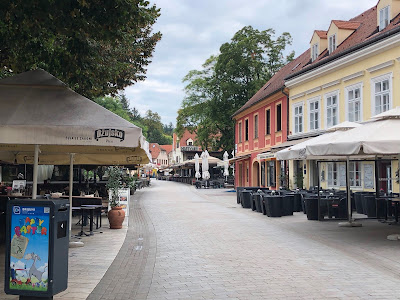 Tkalčićeva was once known as Potok ("Stream" or "Creek") Street as this is where the Medveščak stream was once located, separating the medieval communities of Kaptol and Gradac, as I mentioned yesterday. Kravi Most street crosses Tkalčićeva at one point, indicating the location where many of the battles between Kaptol and Gradac occurred. Potok street was later named after Ivan Krstitelj Tkalčić (1840-1905), a Kaptol priest, historian and archaeologist, who wrote many historical books about Zagreb and the church. 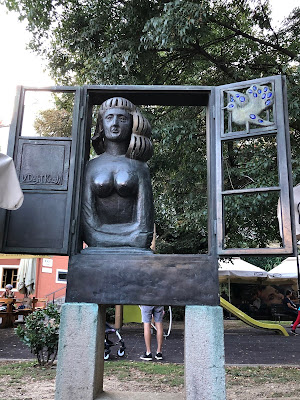 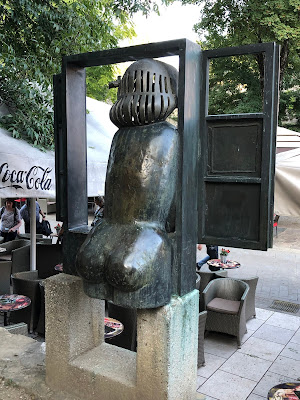 Near 45 Tkalčićeva Street, you'll see a bronze sculpture, known as “Lady in the Window,” which was created by sculptor Vera Drajh Kralj. Why is this naked woman peering out of a window? The sculpture is an homage to the risqué history of this street. Zagreb was the first European city with a legal red light district, and from 1899-1941, almost every house on Tkalčićeva street was a brothel, known as "houses of love!" There was a City Brothel Ordinance and all working women, who had to be at least 17 years old, had to possess a legal permit, have medical insurance and protection. The above sculpture symbolizes a prostitute waiting for a customer.

However, by the law, prostitutes couldn't just sit in a window naked and wait for customers, and they couldn't have signs either. Thus, some brothels would put up a colored light, and not just red lights. For example, one of the most popular, and expensive, brothels was the Kod Zelene Lampe, the "Green Lantern." Some other brothels and prostitutes would place a "garden gnome," or colored dwarf statue, outside their window. If it was standing up, the prostitute was available and if it was lying down, then she was busy with another customer. During this forty year period, the prostitution  trade was valuable to the city's economy and advertised as a tourist attraction. 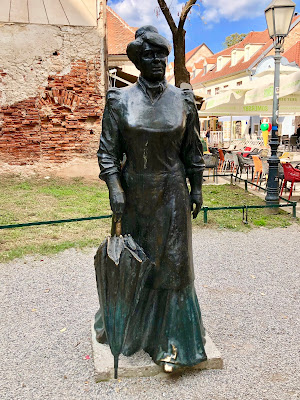 Around 33 Tkalčićeva, there is a small park, which includes a bronze sculpture of Marija Jurić (1873-1957), who was better known by her pen-name Zagorka. She was the first female journalist in Croatian as well as a women's rights activist.  She wrote numerous articles for various newspapers and magazines, also having started a few of her own magazines. She also wrote a number of novels, though none of them yet have been translated into English. 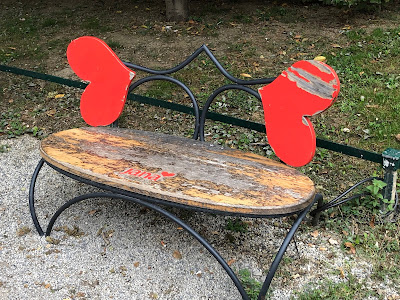 This park has several benches where you can sit, including this one with a couple large, red hearts. 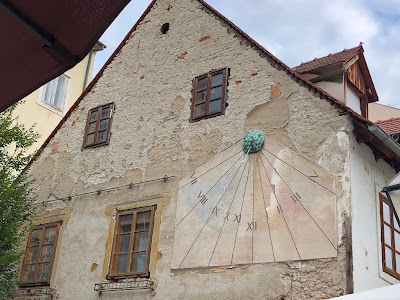 At the edge of this park, there is also an old building with a Sundial on the wall, which was created in 1955, and it is intended to accurately tell the time. 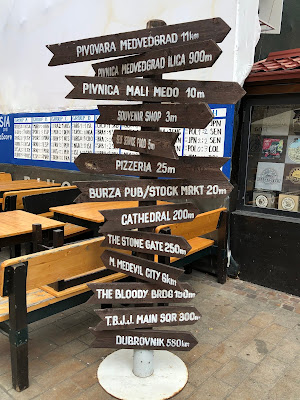 There is an interesting signpost on the street, with arrow signs pointing to locations that are relatively close and others which are quite a distance. From a Souvenir Shop which is only 3 meters away to Dubrovnik which is 580 kilometers away. 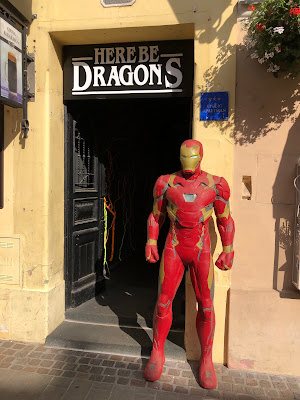 What is Iron Man doing in Zagreb? At 34 Tkalčićeva, you'll find a statue of Iron Man standing in front of Here Be Dragons, a small "ultimate geek shop." They sell a variety of pop culture t-shirts, glasses, statues, jewelry, and much more, from Game of Thrones to Harry Potter. 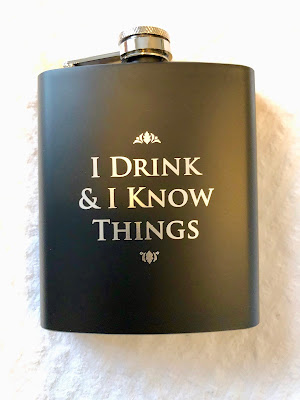 I picked up a Game of Thrones flask, with the words of Tyrion. Will be a good flask for my new Croatian Rakija, a brandy spirit. 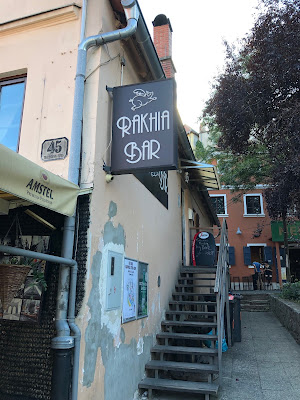 Speaking of Rakija, also known as Rakhia, you'll find a bar dedicated to this brandy at 45 Tkalčićeva, a spot that boasts of offering over 100 types of Rakija. Rakija is common in this region of the world, and in Croatia, it can be made from about any type of fruit, though plums (šljivovica) and grapes (lozovača) are the most common. Some Rakija may also have the additions of honey, herbs and spices, such as Travarica, which contains a blend of wild herbs, though the exact blend will vary from producer to producer. Its alcohol content will vary from 20-40 proof 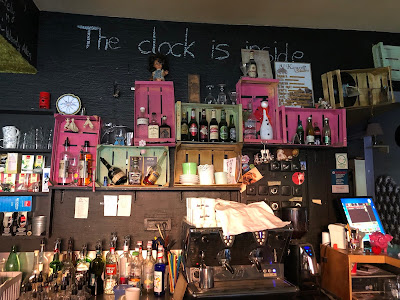 Previously, many people made their their own Rakija at home, and though it is not as prevalent as it once was, you'll still find people producing it at home. It used to be what people did with any leftover fruit. In Dalmatia, it's a tradition that when a guest comes to your home, you greet them with a shot of Rakija, a custom I encountered on a couple different occasions. On one of those occasions, I even had the chance to taste three different flavors of homemade Rakija, and it was delicious and well-made, nicely balanced. In a later article, I'll highlight the best Rakija I tasted in Croatia. 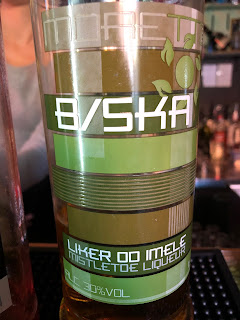 At the Rakhia Bar, there was a list of about 30 different Rakija, all priced at 12 Kuna per shot, about $1.80 U.S. However, prior to 8:00pm, all of these were offered at 50% off, so a shot cost less than $1.00 U.S. I asked the bartender to select five for me to taste, and I received Biska, Jagodicka, Limoncello, Lješnjak, and Bazga.

The Jagodicka (strawberry) and Limocello (lemon) were pleasant, with nice fruit flavors and a mild sweetness, although nothing special. The Lješnjak (hazelnut) had a strong nutty flavor, a mild sweetness, and went down smoothly but again, wasn't impressive. The Bazga (elderflower) was more interesting, with a strong floral aspect, a hint of sweetness, and a pleasing finish. My favorite though was the Biska (mistletoe), with a 30% ABV, with possessed more complex herbal notes, mild sweetness, and a smooth, satisfying taste. I suspect that these brands were more entry level Rakija, especially based on some of the much better examples I later tasted during my trip. 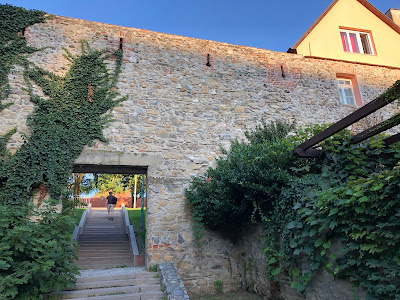 From Tkalčićeva Street, you can cross under this stone wall onto Opatovina Street, first passing through a corner of the Opatovina Park. 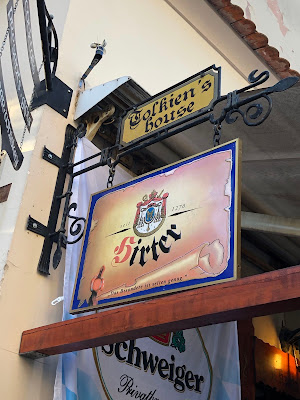 You'll then come to Veliki Tolk ("Tolkien's House") at 49 Opatovina, a pub with a Lord of the Rings theme. You can sit outside on their patio or take a seat inside the small pub. 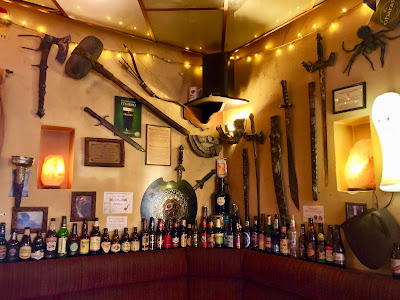 This corner of the pub displays a variety of swords, axes and other weapons. 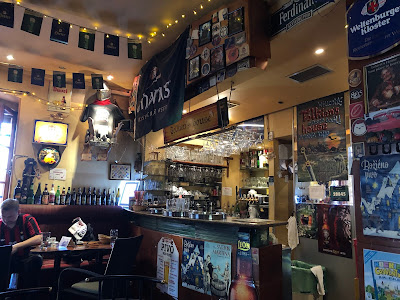 Much of the pub also displays and advertises various beers, ales, ciders and such. 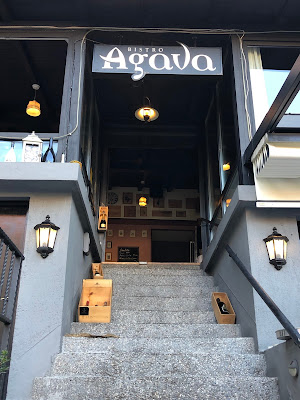 For dinner Friday night, I chose to dine at a restaurant on Tkalčićeva Street, the Agava Restaurant, and I'll provide my full review tomorrow.

Have you ever explored Tkalčićeva Street?
Posted by Richard Auffrey at 3:00 AM