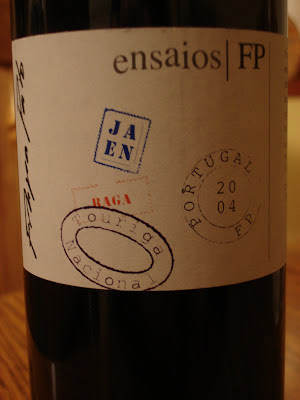 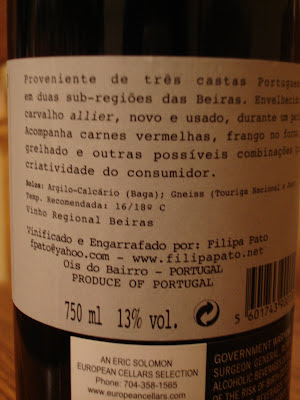 I am still on a Portuguese kick, exploring the wines of this country, seeking other excellent wines. While at the new Spirited Gourmet wine store in Belmont this weekend, I bought a couple Portuguese wines.
I knew nothing about these wines beyond what I read on their labels. And in fact, I could not even read the back label of one of the wines because it was written in Portuguese. But I was willing to give them a try anyways. I opened one last night, the 2004 Filipa Pato Ensaios ($25), the wine with the back label in Portuguese.
Filipa Pato, the winemaker, is the daughter of famed winemaker Luis Pato. In 2001, after working at some foreign wineries, Filipa returned to Portugal to make her own wines. She settled in the Beiras region, which is a larger region encompassing Dão and Bairrada.
Filipa seems involved in much experimentation in wine production so she chose to call her first wines "ensaios" which is Portuguese for "experiments." But, she is also a traditionalist in a number of ways. Thus, she works exclusively with indigenous Portuguese varietals. She also ferment and matures her red wines in oak vats, though she is doing some experimentation with the use of chestnut.
Filipa Pato certainly seems to be an interesting winemaker. If the 2004 Filipa Pato Ensaios is indicative of her skill, then I will avidly seek out her other wines as well.
The wine is a red blend of Jaen (60%), Tinta Roriz (20%) and Baga (20%). The Jaen and Roriz came from the Dao region and the Baga from the Bairrada. It used to be traditional to blend grapes from these two regions. The average age of the vines is 30 years old and it has an alcohol content of 13%. The wine was fermented in a stainless steel tank and 50% matured in used barrels and 50% in stainless steel.
Jaen is the second most planted grape in the Dao region, after Baga, and is thought to be related to the Spanish Mencia. Tinta Roriz is a Portguese term for Tempranillo. Baga is a highly tannic grape found in the Bairrada, Dao and Ribatejo regions.
I found this to be a dark red wine with a nose of black cherry. As soon as you take a taste, you are overwhelmed by its juiciness. It is like biting into a ripe plum. It has luscious notes of plum, black cherry and raspberry. The finish has some mild tannins and a bit of spice. It also lingers in your mouth for quite a decent amount of time. The wine is well balanced and has good structure. Its juiciness is very appealing.
I would definitely recommend this as a Drink & Buy. It is an interesting wine with lots of excellent flavor. Another fine wine from Portugal. I will be seeking more wines from this winemaker.
Posted by Richard Auffrey at 6:25 AM

I think the winemaker changes the blend every year, based on which grapes are best. I’m pretty sure I saw a different vintage of this with 50% Baga/50% Touriga Nacional. (Now, that would be a very different wine!) I saw it at that new wineshop in the Financial District of Boston. I’ll definitely have to give it a try.