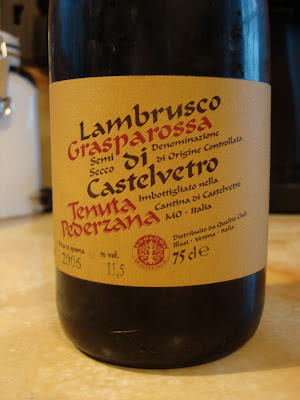 The theme for Wine Blogging Wednesday #42, chosen by Spittoon, is that you must review an Italian wine, of any type, but only use Seven Words. There were a few additional rules: "The finished tasting note must make sense, be grammatically correct(ish), punctuation will help of course. The wine name, type, producer, vintage do not have to be included in the 7. But a reference to aroma, flavour, length, food matching etc. should be considered. Inventiveness is the key."

This was certainly a challenging theme as seven words is a very small amount to encapsulate the complexity of many wines. But it was a fun challenge and I look forward to read what everyone else did.

My wine for this theme was the 2005 Tenuta Pederanza Lambrusco “Grasparossa,” from the Emilia-Romagna region and costing $13.99.

I actually wrote two seven word reviews, one which is just more evocative while the second being more descriptive. You can consider the first entry to be the official entry and the second to be kind of extra credit.

Let me tell you a bit more about this wine. “In the province of Reggio Emilia and Modena, Lambrusco vineyards extend from the slopes of the hills to the line of the Po River, which separates the district from Mantuan territory. All four of the existing Lambrusco Denominazioni do Origine Controllata are found in that zone. Lambrusco has an extremely noble background. The wild vine from which the existing variety originated, called labrusca by the Latins, was known to the Etruscans and Romans. And its fossilized remains have been found in soils of the Eocene period. Despite is extremely ancient origin, Lambrusco was never well known or appreciated outside its production area until it achieved a remarkable commercial success in the U.S. in the seventies and eighties. Despite the fact that it is now widely distributed, there are still many prejudices about the wine. Matters are not made easier by the widespread conviction that there is only one Lambrusco when, in reality, there are many, each different from the other in sensory characteristics and composition, whether in terms of the subvariety used or in those of area or origin.”

In college, I used to drink a lot of Riunite Lambrusco. When I tried the Grasparossa, I certainly did expect to find such a serious wine. This is a single varietal, estate bottled wine and is served chilled. It actually has a cork like in a Champagne bottle. It has a bit of frizzante, a slight carbonated taste, which is refreshing. It has lots of flavor, nice berry tastes and only 11.5% alcohol content. It is not a sweet wine, not like Riunite. It has character to it, and I found it very appealing. Thus, Riunite must bow itself to the true Lambrusco, the authentic ruler. Ruinite is but a poor pretender to the throne.
Posted by Richard Auffrey at 6:00 AM

Email ThisBlogThis!Share to TwitterShare to FacebookShare to Pinterest
Labels: wbw

Ahh, but Riunite has the better jingle. You have to remember it!