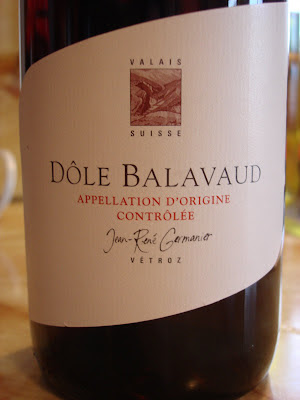 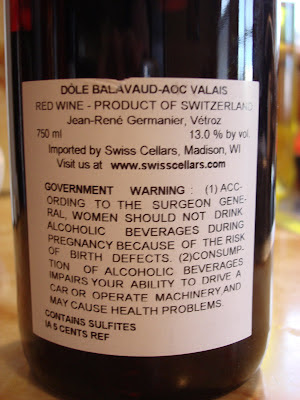 Have you ever tasted a Swiss wine? They are certainly not easy to find locally and, in fact, Switzerland only exports about 2% of their wines. So when I found three different Swiss wines at a new wine store, Salem Wine Imports, I had to buy one of each to try them.

Switzerland has the highest vines in Europe. Most of their wine is produced in the western cantons and Valais is their most productive one. The Swiss produce far more red wine than white as they consume almost twice as much red as white. The most planted white grape is Chasselas, and one of the wines I bought is made from that grape. Pinot Noir, also known as Blauburgunder and Clevener, is probably the most planted red grape though Switzerland also has numerous indigenous grapes such as Amigne, Reze, Cornalin, and Bondola. I had never heard of those grapes before.

So, I begin my explorations of Swiss wine with a red, one that possesses mostly Pinot Noir. The 2006 Jean-Rene Germanier Dole Balavaud ($24.99) is from the Valais AOC and has an alcohol content of 13%. The Balavaud vineyard was begun in 1896 by Urbain Germanier. It is located at the heart of the Swiss Rhône valley called Valais. Interestingly, Dole is the Swiss name for a blend of Pinot Noir and Gamay where the Pinot must dominate.

I found this wine to be very light red in color. It had a nose of cherries and strawberries and that came through on the palate as well. It was a medium-bodied wine, smooth and easy drinking. The finish was long. It was an intriguing wine as it did not taste like a Pinot or a Gamay. It had its own unique identity and the two grapes seemed to pair quite well. I definitely enjoyed this wine, though it might be a bit pricey. Though I have read that Swiss wines are generally more expensive than comparable wines in other countries. Maybe it just did not seem complex enough to justify its price. Though it certainly is a wine that work please many people.

Tonight maybe I will open the Swiss Gamay.

Posted by Richard Auffrey at 5:00 PM

Hi Richard,
Just writing to let you know that We have the Germanier Dole at OurGlass for $21.99. This is one of my favorite wines, especially with the warmer weather approaching. Stick it in the firdge for a light chill on a hot summer's day!
Deanna

Thanks for the tip Deanna!