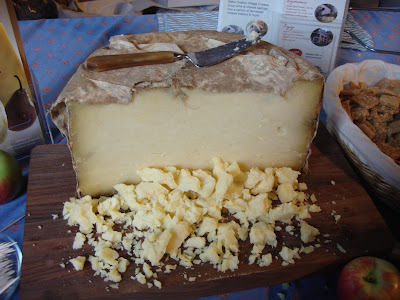 I love cheese and I am far from alone. Informal polls on Twitter indicate a significant number of people who would prefer a cheese plate to a sweet dessert after dinner. Wine and cheese is often touted as a good pairing but it can present problems. In fact, some people suggest pairing beer with cheese as it entails far less problems. I have a different solution, pairing Sake with cheese.

Cheese has far more problems with red wine as opposed to white, and that is primarily because of the tannins in red wine. Most cheese is salty, which tends to heighten the impact of the tannins, making your mouth extremely dry. Usually that is not a pleasant feeling. To resolve that issue, white wines, which have no tannins, generally pair better with cheeses. Sake, which also has no tannins, avoids this problem with saltiness in cheese. When you consider how well Sake interacts with salty soy sauce, you can understand why cheese doesn't pose a problem to Sake.

Pairing white wines with cheese can be a problem sometimes too. Aged cheeses, which may have strong flavors and are rich in fat, may overwhelm white wines. That is why red wines are sometimes paired with such cheeses, despite the potential salt and tannins issue. Once again, Sake can be the solution as there types of Sake which can handle aged cheeses very well. 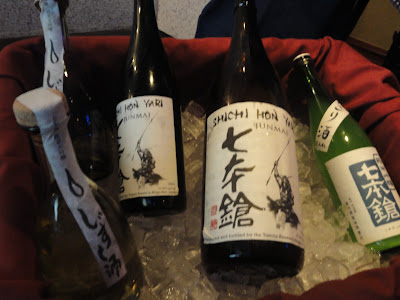 As I mentioned in my prior post, The Science of Sake & Food Pairings, Sake has an intriguing chemical composition which allows it to pair well with almost any type of food. Both Sake and cheese contain lactic acid, which means they can possess complementary flavors and aromas. As I mentioned before, Sake is usually rich in umami and that works well with other umami foods, including cheeses. It is usually the aged cheeses which possess the most umami, like a fine Parmesan or aged Gouda.

The diversity of Sake also contributes to its versatility. There are dry Sakes with high acidity which work well with smooth goat cheeses or similar soft, spreadable cheeses. A fresh, bright Namazake would work well in that situation too. An earthy Kimoto or Yamahai, rich in umami goes well with aged cheeses, or even the strong flavors of a blue cheese. Or try an aged Koshu Sake with such cheeses. The sweetness of some Sakes will also work with cheese, helping round out any edges in the cheese. Try a lightly sweet Sparkling Sake, which can work well with cheese like a Sparkling wine might do.

When I have introduced Sake and food pairings to people, they have seem the most surprised, and pleasantly so, by how well Sake and cheese work together. Cheese is certainly not a traditional Japanese food, but that doesn't mean that Sake can't pair well with it. Sake avoids the problems of wine & cheese, as well as possessing its own advantages that make the pairing so effective.

The next time you create a cheese plate for a party, and are looking for a more unique presentation, why not accompany the plate with a few different Sakes and let everyone see how each Sake works with the varied cheeses. I am sure your guests will enjoy the experience, as well as learn something.
Posted by Richard Auffrey at 3:00 AM

This is really fascinating, particularly the science behind it. Thank you for your well-written explanation. Are there any sake brands or specific cheeses that you can suggest to try together?

Thanks Lynn for your comment. Rather than provide specific brands, it would probably be more helpful just to indicate specific Sake styles as I did in the article. It would be hard for me to know which specific Sakes are available to you.