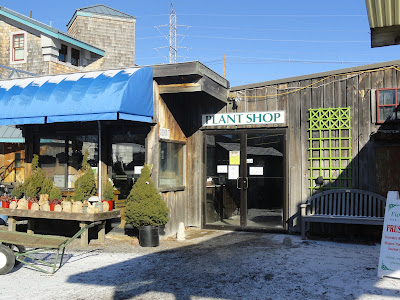 Though it almost seems like every city and town has a summer/fall farmers' market, there are far fewer winter markets despite their value. One winter option is the Wayland Winter Farmers' Market at Russell's Garden Center, easily accessible off Route 128 on Route 20. The market is now open on Saturdays, from 10am-2pm, through March 9. They have about 40 vendors and also run certain special events, like Farm Fiber Days and the Massachusetts Farm Wineries Day.

I checked out the MA Farm Wineries Day last Saturday, which had nine local wineries presenting some of their wines for tasting. Many of the regular vendors were present as well. Usually there are only a few wineries at the market but this event brings out several more. It was an impressive market, with a diverse range of vendors, many offering food samples. I bought numerous items and considered buying even more, which will have to wait until my next trip.

I am going to highlight some of the vendors but please realize there are plenty of others I didn't mention who are also worthy of attention. One of the first tables I encountered in the market belonged to Sweet Lydia's of Lowell, which makes gourmet marshmallows and s'mores. They even were selling hot chocolate topped with various flavored marshmallows. Though I didn't purchase anything, I was very tempted and will be sure to do so next time. The Toasted Coconut Marshmallow is calling my name. 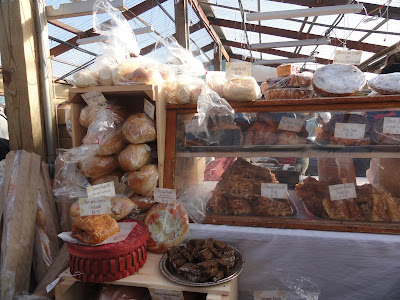 I have been a fan of the Danish Pastry House for at least five years so it was great to see them at the market. They make a variety of baked goods, from breads to pastries. Their baked goods seem to go fast so it pays off to get to the market early and make this one of your first stops. 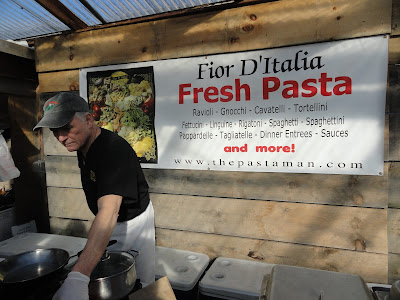 I have previously patronized Fior D'Italia Pasta & Cheese when it was at the summer farmer's market in Wakefield. Vic Tirrito owns this pasta company, which is based in Vermont, and he uses only products from New England, also trying to use as much organic as possible. At the market, he sells pasta, ravioli, gnocchi, sauces and even makes a few dishes you can eat at the market. Located in Amesbury, Seacoast Butters makes a variety of compound butters using organic butter and locally sourced ingredients. There are at least 15 different flavors including Bacon and Sriracha (both which I enjoyed). A 3 ounce container costs $5.75 which seems a bit pricey, though they are using quality, natural ingredients. 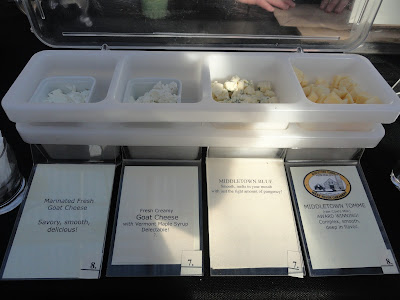 West River Creamery, located in Londonderry, Vermont, produces a range of delicious cheeses. They have about 40 milking cows on their 200+ acre farm. At the market, they had at least eight cheeses you could taste, including Middletown Blue, Middletown Tomme, Cambridge Farmhouse English Cheddar, and Smoked Cambridge. My favorite was the Marinated Fresh Goat Cheese which was so creamy and savory. Caledonia Farm, located in Worcester County, combine with Burnshirt Valley Farm to sell pasture raised beef, pork, chicken, and goat. I bought some beef and pork and look forward to seeing how it tastes. More pasture raised beef can be found at Charlton Orchard Farms, which also sells apples and cider. Obadiah McIntyre Farm Winery is located at their farm, selling a variety of wines, including fruit wines, sparkling wines and hard ciders. 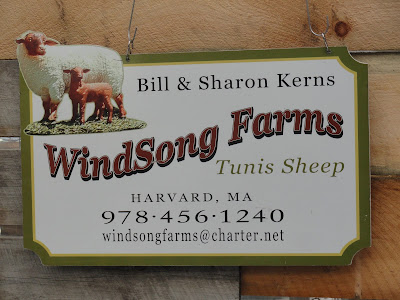 If you prefer lamb, then stop by the table for Windsong Farms, a 35 acre farm located in Harvard. You'll find lamb rib chops, loin chops, boneless leg, shoulder roast, shanks, sausages, ground lamb, liver, heart, and kidneys. As a lamb lover, I was very pleased to see their offerings. Would you rather have seafood? Well C&C Lobster & Fish offers plenty of fresh fish and even lobsters for sale. Yes, seafood isn't cheap but it is one of the healthiest foods you can eat and it delicious. Adding seafood to your diet is strongly recommended. Haven't got the time to make a seafood dinner at home? Fishwives Specialty Foods has you covered with their Mandy's Seafood Chowder. All natural, gluten free and using sustainable seafood, this is a lobster bisque filled with shrimp, scallops, clams and fish. Most of the seafood is local except the shrimp is wild caught from Key West and sometimes they use Alaskan pollock. I tasted the chowder and it was very appealing, a nice creaminess to it without being too thick. It was well spiced and it would be excellent for a winter dinner. I bought some and have already enjoyed it for dinner one night. I will be sure to buy more when I return to the market. 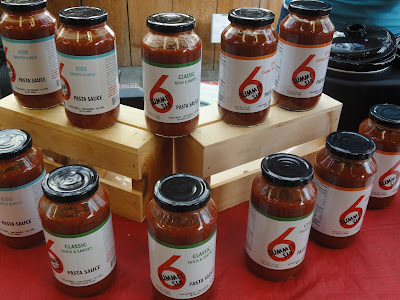 For some, it may sound like a nightmare pasta sauce. Joslin Foods provides a line of Summit Six pasta sauces which are all natural, fat free, and low sodium but they also contain veggies from each color group including carrots, green beans, eggplant, red cabbage, garlic and tomatoes. Yet even if you dislike some of those veggies, worry not. I very much liked this sauce and it didn't taste at all like cabbage or green beans. They have three different varieties: Summit Six Kids (smooth and mild with no chunks), Summit Six Classic (thick and savory with chunks) and Summit Six Spicy (chunky with a spicy kick). I tasted the Spicy but it lacked any chunks in the sample I tasted. I bought some of the Spicy and look forward to seeing what I think when I have more than a small sample. 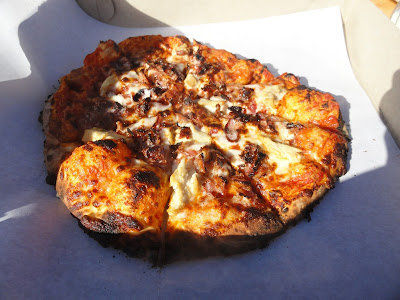 There is even a food truck at the market, the unique Vesta Mobile Wood-Fired Pizza. What a cool idea! Their pizzas cost $8-$12 and you can choose your own toppings or have one of their creations, such as the  Breakfast (cheese, bacon, sausage, onions, peppers, Egg Beaters), The Vesta (red sauce, bacon, chicken, Mozzarella and Provolone cheese) or the Beetza (pesto, winter moon root beets, caramelized red onions, black olives and Gorgonzola cheese). Above is the Vesta and it was tasty, with a nice, crisp crust, plenty of toppings and lots of cheese. I recommend getting a pizza for breakfast or lunch when you stop at the Wayland market. Coastal Vineyards, owned by David and Linda Neilson, was founded in 2004 and is located in South Dartmouth. They have a small, 8 acre vineyard, growing Chardonany, Pinot Gris, Pinot Noir, Sauvignon Blanc, Gewurtztraminer, Riesling, Merlot, and Cabernet Franc. They produce at least 14 different wines, generally using only their own locally grown grapes.

At the Market, they poured several of their wines and overall I think they are doing a good job of making some easy drinking, pleasant wines. The 2010 Estate Chardonnay ($15) was my favorite, an unoaked version which was crisp, clean, and dry with pleasant green apple and pear flavors. Though I am not a huge fan of cranberry, the 2011 Cranberry Sunset ($16), a blend of Chardonany and cranberry was appealing, with a mild tartness from the cranberry. The 2010 Seaside Red ($20), a blend of Cabernet Franc and Chambourcin was a light bodied wine with nice red berry flavors and some herbal notes. 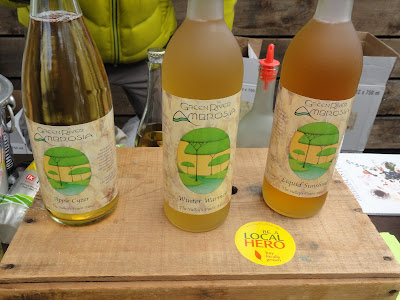 Mead is hot now! The Green River Ambrosia Winery, located in Greenfield, is a small, artisanal meadery that currently produces about 5000 gallons annually, nearly twice what they made the prior year. They use local raw honey and their meads are sulfite free and gluten free. As they are still a small meadery, they are able to obtain sufficient local honey, from Warm Colors Apiary in South Deerfield, for their products.

The Liquid Sunshine ($15) is a traditional semi-dry mead and I enjoyed it, with its pleasant honey notes and a mild sweetness. The Winter Warmer ($15) is a full bodied, semi-sweet mead with winter spices and it is perfect for this cold season. Hints of cinnamon and Christmas spices make this a tasty mead. My favorite of the meads was the Apple Cyzer ($20), made from a 13 heirloom variety cider. Topped by a crown cap, the cyzer is a little frizzante with a rich apple flavor, mild sweetness and appealing honey notes.

They also produce an intriguing non-mead beverage, the Ginger Libation ($15). It is touted as a "pre-Prohibition style ginger beer" and a "spicy alcoholic ginger soda." It is sweetened with cane sugar, pineapple, and citrus juices. It is technically a ginger wine rather than a beer as no malt is used. However, it tastes very similar to a ginger beer, lightly effervescent with a strong ginger flavor and mild sweetness. I bought a bottle and made a Dark n' Stormy with it, though the meadery calls such a Drunk n' Stormy. It made for a delicious, albeit strong, cocktail and everyone who drank it enjoyed it very much. 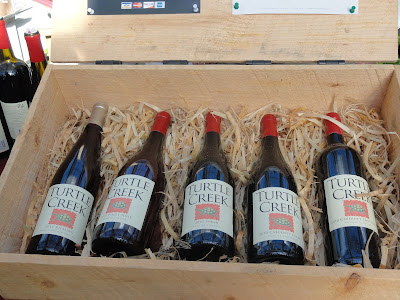 Kip Kumler, owner/wine maker of Turtle Creek Winery of Lincoln, also made an appearance at the market. I have written several times about the winery and their wines and Kip is a very passionate and skilled wine maker. He presented several of his wines, including the 2011 Riesling, 2010 Pinot Noir, 2010 Syrah, 2010 Cabernet Sauvignon and the 2010 Cabernet Franc. If you have not tasted his wines, you definitely should do so.

Turtle Creek now has a wine club, their Wine Subscriptions, which sends out quarterly releases of wine to all its members. There are three different levels, dependent on how many bottles you wish to receive, from 3-9. You will receive a discounted price, from 10%-20%, discounts on shipping and a number of other benefits, such as being able to attend special events. Sound good if you enjoy Turtle Creek Wines. 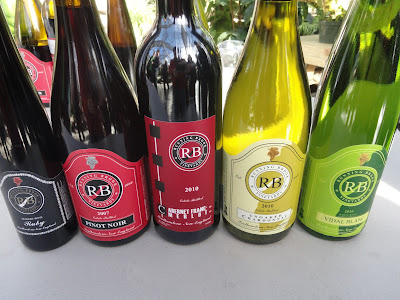 Running Brook Vineyard & Winery, founded in 1998, is located in North Dartmouth and they produce wines primarily from their own, locally grown grapes. Their 2007 Pinot Noir ($18) was light bodied with bright red fruit flavors and a hint of spice. Easy drinking and the type of red you could easily drink with seafood.

The Wayland Market has numerous other vendors that I did not mention Bagel Alley, The Herb Lyceum, Paino Organics, Shady Oaks Organics, Terrosa Farm, and others. It was very popular and it is understandable why that is so as there are plenty of interesting vendors, selling lots of tasty food and wine. I will be returning to the market and highly recommend that everyone check it out too.
Posted by Richard Auffrey at 3:00 AM

Good idea for Healthy food is Organic Food
so
Visit us- http://www.downtoearthorganic.com