Wines of Crete: A Taste of History & Terroir 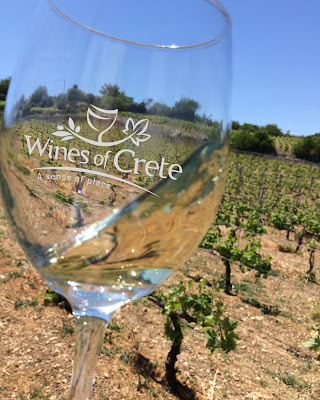 King Minos. Daedelus, architect of the Labyrinth. The dreaded Minotaur. The romance of Ariadne and Theseus. The mythology of Crete captivated me as a child and it has remained an interest of mine. Today, I can also experience the lengthy and fascinating history of Crete through its wines.

Each sip of Cretan wine is like a taste of the ancient past.

The history of wine making on Crete extends back at least to 4000 BC. Crete is also the location of the oldest known wine press, from 3500 BC, and the Law Codes of Gortyn, the oldest legal document in Europe which addresses wine laws. The indigenous grape, Dafni, may be the oldest still extant grape in the world. You could drink a wine made from a grape that once was enjoyed by Socrates or Aristotle .In the ancient world, the wines of Crete were sold by merchants all over the known world. However, despite this lengthy history, the wines of Crete currently are not as well known as they should be, and that needs to change. 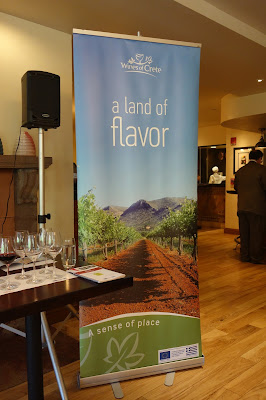 Bistro du Midi hosted Wines of Crete, a non-profit, wine promotion and advocacy organization. for their master class, Discover Crete's Native Varietals: History in the Glass.  This was an industry event, presenting education on the wines of Crete along with a tasting of twenty-two wines. The Wines of Crete was formed in 2006 and now has 30 winery members, representing about 90% of all Cretan wineries. They are responsible for the "...the promotion and recognition of Cretan wine, both inside and outside Greece now, and on the other, the development of wine-tourist mainstream on the island..." All of their member wineries, no matter their size, get the same amount of promotion.

The presenters included Moderator David Ransom, Wine Journalist; Robin Kelley O'Connor, CWS, CWE; Project Manager of Wines of Crete Stella Astirakaki and representative from Strataridakis Winery; Winemaker John Stilianou; and marketing specialist Alexander Sikiaridis. The event began with  a short educational program, with a tasting of six wines, and then there was a walk around tasting with lunch. 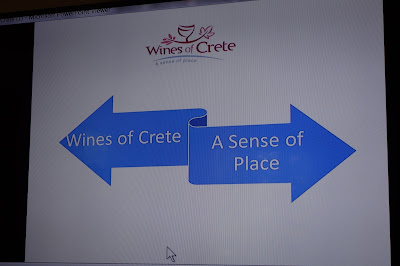 One of the most important items discussed was that Crete possesses eleven native grapes, including seven whites (Vidiano, Vilana, Thrapsathiri, Malvasia di Candia, Spina Muscat, Dafni, & Plyot) and four reds (Kotsifali, Mandilari, Liatiko, & Romeiko).  About 80% of their vineyards are planted with these native grapes and 20% with international varieties such as Cabernet Sauvignon, Merlot, Syrah, Chardonnay, and Sauvignon Blanc. New plantings though are more often with native grapes, so they are relying less and less on international grapes. Though there are plenty of white wines made from a single varietal, most of their red wines are blends.

I first encountered these native Greek grapes back in 2007, with tastings of wines made from Dafni, Kotsifali and Mandilari. Over the years, I've enjoyed a number of other Greek wines, especially as the Boston Wine Expo usually has several tables of wines from Greece. At the recent Master Class, it was a real pleasure to taste more Cretan wines, to experience a glimpse into the current status of their wines, and learn more about their intriguing native grapes.

During the presentation, Robin Kelley O'Connor made a fascinating comment, one which gave me pause to think. He stated that "native grapes give us a whole new set of wine descriptors." It is the uniqueness of such native grapes which raises different impressions in their aroma and taste. Though they might seem familiar in some ways, they also present something different, which may spark new thoughts.  It could be more challenging to explain what we find within these wines made from native grapes we haven't experienced before. That is one of the wonders of wine, expanding our palates by experiencing what is new to us. 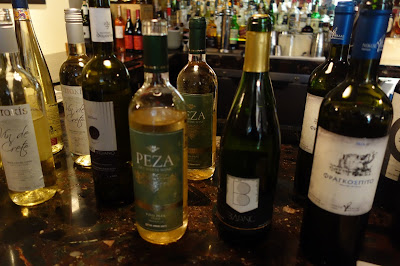 Out of the 22 wines I tasted, there wasn't one that I disliked, though some definitely stood out above the rest. A few of the wines were made from or included international grapes,such as Chardonnay, Syrah and Merlot. Those were generally my least favorite of the wines, primarily because they had a more international taste profile and I was seeking more of a taste of Crete. They certainly weren't bad wines by any means, and I could easily enjoy a glass before me, but I wanted more of a taste of place.

Though it is difficult to put into words, I generally found the Cretan wines had a certain exoticism to them, a unique quality which was hard to pinpoint. This is probably due to Robin's comment on a need for new wine descriptors with native grapes. Though these wines are similar to others in most respects, there are unique elements too which should delight your palate.

My top 3 white wines included:
--2013 Rhois Tamiolakis Rhous Skipper: A blend of 70% Vidiano and 30% Plyto, with an alcohol content of 13.5%. A complex and intriguing wine, it presents with citrus and lemon flavors, savory notes and plenty of minerality. It has a richer body with crisp acidity and a pleasing finish.
--Vidiano Miliarakis: Made from 100% Vidiano with an alcohol content of 12.5%,. With strong acidity, the peach and melon flavors shine forth. An excellent summer wine, it can be enjoyed on its own but also would work well with food.
--2014 Idaia Winery Ocean:  Made from 100% Thrapsathiri, it has an alcohol content of 13%.. With pleasing citrus and stone fruit flavors, this wine also has crisp acidity, mineral notes and a dry finish. Another good wine for the summer. 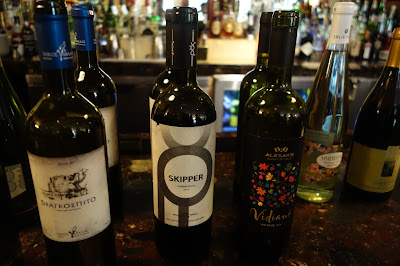 Seek out the unique wines of Crete, especially those made from their native grapes. It is a taste of history, a taste of terroir Enjoy them this summer aas well as year round.
Posted by Richard Auffrey at 3:00 AM