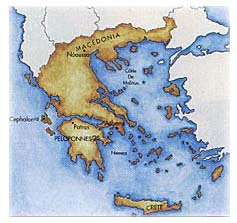 "Nothing more excellent or valuable than wine was every granted by the gods to man."
--Plato

For over 4000 years, wine has been a significant element of Greek culture, something few other wine regions can say. The Greek word for wine, which can be traced back over 3000 years, is oenos.  The ancient Greeks loved wine and it figured into much of their life with even their philosophers waxing poetically about wine. During the last twenty-five years, the Greek wine industry has undergone much renovation and change, bringing their production processes into the modern world. However, despite its lengthy history, Greek wine seems to lack the recognition it deserves.

First, Greek wine has a lengthy and fascinating history.
Wine making in Greece extends back over 4000 years and wine was an integral element of ancient Greek civilization. Few other countries can boast of such a lengthy wine making history. Plus, some of their indigenous grapes have been around since the days of ancient Greece.  For example, you can now enjoy wines made from the Limnio grape, which was written about by the ancient Greek philosopher Aristotle.  Each sip of such a wine beings with it a sense of history, a connection to the ancient past. Taste the centuries in a glass of Greek wine.

Second, Greece has many unique, indigenous grapes.
There are over 300 indigenous grapes in Greece, though only about 15% are used regularly. Aidani, Assyrtiko, Malagousia, Robola, Roditis, Sideritis, Agiorgtiko, Limnio, Mandilaria, Mavrodaphne and Xinomavro are but a small sample of their indigenous grapes. They present unique flavors and aromas, though still offering some familiarity. Any wine lover seeking to broaden their palate, to experience something new, should seek out such unusual grapes which may be found only in Greek wines. I love exploring unusual grapes and Greek wines allow me to further enhance my experiences.

"Both to the rich and poor, wine is the happy antidote for sorrow."
--Euripides

Third, Greece grows some international varietals.
Besides all of their indigenous grapes, you'll also find more familiar grapes like Chardonnay, Sauivignon Blanc, Cabernet Sauvignon, Merlot and Syrah. You will even find Tempranillo!  Some producers use these grapes in blends while others make single varietal wines. Though they make good wines with these grapes, sometimes they can seem like wines made from any other part of the world. I much prefer the Greek wines made from indigenous grapes, as they offer a better sense of place. Some producers feel they must make wines with international grapes as that is what consumers seek.  It is a much easier sell than trying to get consumers to embrace Malagousia or Mavrodaphne.

"Bacchus opens the gate of the heart."
--Homer

Fourth, Greek wines are diverse.
Though about 70% of the current Greek wine production are White wines, they also produce Sparkling, Rosé, Red, Dessert wines and Retsina. Plus, the wines come in a wide variety of flavor profiles so there should be something available to appeal to any personal preference. In addition, there are many different terroirs in Greece, which further leads to diversity in their wines.  Greek wines are multi-dimensional and there is much to discover in that multitude.

"Quickly, bring me a beaker of wine, so that I may wet my mind and say something clever."
--Aristophanes

Five, Greek wines are made for food.
Greek wine is a natural pairing for food, especially Mediterranean cuisine, though its versatility extends into many other cuisines as well.  Many producers have told me that their wines were specifically produced to accompany food and I have yet to hear a Greek producer tell me that their wines were created not to pair with food.  If you purchase a Greek wine, you can be almost assured that it will pair well with food.  Dependent on the type of food, there is also probably a type of Greek wine which will work well with that dish, from seafood to steak, pasta to chicken.

"No poem was ever written by a drinker of water."
--Homer

Six, there is good value in Greek wines.
As many wine lovers are concerned about price, Greek wines should be appealing as you'll find a fair number of tasty Greek wines for under $15, making them very affordable options. The fact Greek wines are not as popular means they are more hidden value wines. Some wine regions, due to their popularity, raise their prices commensurately. Greek produces high-end wines too, but those on a budget will find much to please them. These value wines are also an excellent entry to experience all that Greek wine has to offer.

"When there is plenty of wine, sorrow and worry take wing."
--Ovid

Seven, there are many organic vineyards in Greece.
The eco-system in Greece is very conducive to organic agriculture, especially due to conditions which limit potential diseases, so the use of chemicals in vineyards is often unnecessary. A number of wineries have received organic certification, though others have not sought certification yet still engage in organic agriculture. And as agriculture has been such a significant aspect of the country for millenia, many farmers take a more holistic approach to agriculture. This matters to numerous wine lovers and is an added reason to embrace Greek wines.

"I regard those as wise who employ old wine freely and study old stories."
--Plautus

Eight, the average person will enjoy Greek wines.
There is no reason why consumers won't like Greek wines.  The wines offer plenty of delicious tastes, pair well with food, and offer value. I have seen plenty of consumers taste Greek wines, and be pleasantly surprised at how much they enjoyed them. The reason they often do not sell is more due to unfamiliarity and ignorance. Most consumers know little about Greek wines so they gravitate instead to what they already know. That can be overcome with greater education and more tastings. People need to be shown they are missing out on these delicious Greek wines.

"The best kind of wine is that which is most pleasant to him who drinks it."
--Pliny the Elder

Nine, give Retsina a chance.
Many people turn their nose up at Retsina, having had very unpleasant previous experiences with this wine. My initial experiences with retsina, up until several years ago, were nasty, reminding me of Pine Sol. However, I have now tasted a few Retsinas which I actually enjoyed. The pine element was more in the background, adding an interesting herbal element to the wine without overpowering. Wine making has improved and now you will find delicious and appealing Retsinas that should change your opinion about these wines.

"In wine there is health."
--Pliny the Elder

Ten, and most importantly, Greek wines are delicious.
It is a simple thought but sometimes gets forgotten amidst everything else. In the end, the most significant aspect of wine is that it tastes good. No matter what else a wine has going for it, if it does not taste good then it has failed. I have tasted many good Greek wines, certainly not everything I have tasted, but the majority at least. I have tasted good wines of all types, whites, reds, roses, dessert wines and retsina. I may appreciate Greek wines for many different reasons, but first and foremost, taste remains the most compelling reason to drink Greek wines.

So, are you convinced to give Greek wines a try?
Posted by Richard Auffrey at 2:23 PM