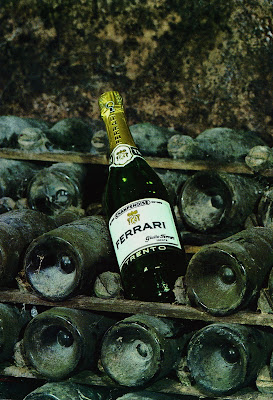 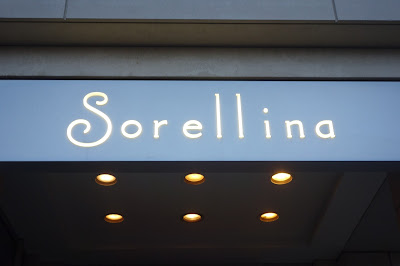 Earlier this week, I attended a media dinner at Sorellina and met Marcello Lunelli, the Vice President and wine maker at Ferrari Trento. It was his first trip to Boston and with our dinner, he presented five Ferrari sparkling wines, from a Rosé to Vintage bubbly. Marcello was a charming dining companion and I learned much about the Ferrari wines, being impressed with the taste and quality of the five wines I experienced. My feelings were mirrored by the others at the tasting, who all seemed similarly impressed.

To better understand the sparkling wines of the Trentodoc, we need to journey back to the end of the 19th century. At this time, the Trentino region was still a part of Austria-Hungary and wouldn't become part of Italy until after World War I. Giulio Ferrari, a graduate of Imperial Royal College of Agriculture ar Saan Michelle all'Adige and the School of Viticulture in Montpelier, spent a year learning about Champagne in Eparnay. He believed that Trentino had similarities to the Champagne region and decided to try producing sparkling wine in Trentino using the methods of Champagne.

Around 1900, he began planting Chardonnay in Italy, which may have been the first time it was ever planted in Italy. He founded the Ferrari winery in 1902, producing small amounts of sparkling wine, using the metodo classico, from his Chardonnay. This was  certainly a risky endeavor but he made it succeed. Even though Giulio charged a high price for his wines, it didn't take long for his sparkling wines to win international awards and recognition, though he exported little of his product. Success through the labors and passion of one man who loved sparkling wine.

In time, more people followed Giulio's example and began producing sparkling wine in Trentino too. Eventually, in 1993, the Trento DOC was established, for white and rosé sparkling wines made in the metodo classico, primarily using Chardonnay and Pinot Noir. Pinot Blanc and Pinot Meunier are permissible grapes but are used far less commonly. There are currently about 44 producers in Trentino, producing a total of about 8.5 million bottles annually. It is still a relatively small region but it has made a strong mark in the wine world. 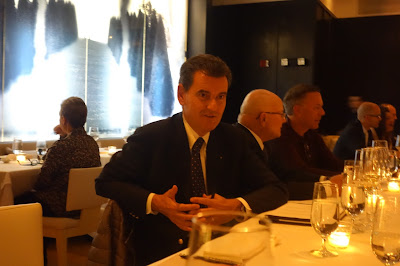 Returning to the past, we journey to 1952, when  Giulio Ferrari was seeking a successor for his winery. He had no children of his own so he had to seek outside his family, eventually choosing Bruno Lunelli, who had owned a wine shop in Trento since 1929 and been a good customer of Guilio's wines. Though Bruno purchased the estate, Giulio stayed on to help with wine making until his death in 1965. In 1952, Giulio had only about 30 acres of vineyards, all Chardonnay, and was producing about 9,000 bottles annually. When Bruno took over, he quickly raised production to about 20,000 bottles, though continuing to maintain the quality of the sparkling wines.

Around 2000, the third generation of the Lunelli family took over the operation of the winery and Marcello, pictured above, is the Vice President and a wine maker. Only blood relations of the Lunelli family may work in the company, to help ensure the company remains intact. The winery owns over 300 acres in Trentino, growing 20% of the grapes they need. They purchase the rest from about 500 small farmers in the region. They have 11 different labels, each from specific vineyards, and produce about 4.5 million bottles annually. About 20% of that production, about 900,000 bottles, is exported, primarily to Japan, the U.S.and Germany.

In Trentino, the current harvest is largely completed and they believe it will be an excellent vintage, one of the best since 2010. The last two vintages, 2013 and 2014, weren't too good and they did not produce any of their vintage Giulio Ferrari Riserva del Fondatore. Marcello noted that climate change has affected their region, the average temperature having risen one degree in the last thirty years, a greater change than had occurred in the 2000 previous years. To combat climate change, they have been moving their vineyards 100 meters higher and plan to eventually move all of their Chardonnay. As it is a mountainous region, they have the ability to make such a change. 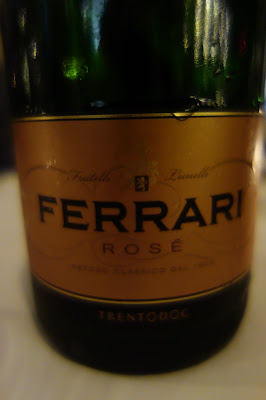 Our welcoming sparkling wine was the NV Ferrari Brut Rosé ($36), a blend of 60% Pinot Noir and 40% Chardonnay which is made in the saignee manner and spent over two years in the bottle on the lees. It has an alcohol content of 12.5% and a dosage of 4.8 g/L. This was a refreshing and delicious sparkling wine, with a clean, crisp taste and pleasing, bright red fruit flavors. It is elegant and complex with tiny bubbles, slight toasty notes and a hint of bitterness of the long finish.

This is a very food friendly wine and Marcello noted that his favorite pairing with this Rosé is pizza, which I would agree would be a good and fun pairing.  We enjoyed this wine with some raw oysters accompanied by a lemon granita, kind of an oyster slushy. The briny oysters and lemon acidity of the granita went well with the clean and bright flavors of the Rosé.

Our second wine was the 2006 Ferrari Riserva Lunelli ($56),  a Blanc de Blancs of 100% Chardonnay from vineyards at Villa Margon. The wine was matured in large format, neutral American oak, spending at least seven years on the lees. It also has an alcohol content of 12.5% and a dosage of 2.5 g/L. The aroma was intriguing, with some brioche and nutty notes and hints of smokiness. On the palate, it was fresh, crisp and clean with green apple and pear flavors, mild spice elements and a touch of toastiness. It also possessed a mild creaminess, a lengthy finish, and plenty of intriguing complexity. An excellent sparkling wine.

With this wine, we had a few different appetizers, including a superb tuna tartare, a beet salad and octopus. Once again, this was a food friendly sparkling wine and went well with all of the various dishes. Based on the tuna tartare, this would also be a great choice for sushi.

At one point during the dinner, Marcello said, "You don't need to be a sommelier as sparkling wine pairs with everything." This means that you don't need to worry about deciding on what wine to pair with what food. If you choose sparkling wine, you won't go wrong no matter what food you choose. When I visited Champagne, I had it paired with nearly all of my food courses for lunch and dinner, and I found that sparkling wine is extremely food friendly and you really can't go wrong selecting it for your meal. 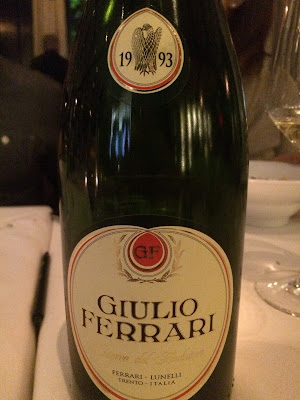 The final three sparkling wines were three different vintages of their Giulio Ferrari Riserva del Fondatore, their top of the line bubbly. The first vintage ever made was 1972 and they still have about fifty bottles stored in their library. They do not make this vintage bubbly every year and didn't produce it in 1998, 2002, 2013 or 2014, though they will be making it in 2015. The current vintage available in the U.S. is 2002 though in Europe the 2004 is the current one. The Chardonnay grapes for this special wine are from the Maso Pianizza vineyard, located at an altitude of over 500 meters. The wine is aged on the lees for over 10 year.

We began with the oldest of the three vintages, the 1993 Giulio Ferrari Riserva del Fondatore ($400) which has an alcohol content of 12.5% and a dosage of 2 g/L. This impressive sparkling wine nearly left me speechless and I have to say that it was one of the best sparkling wines I've ever had. Marcello said this vintage was one of the best in the last twenty years. Initially, this wine will strike you as fresh and young and you won't believe it's 22 years old. You'll soon realize though the deeper complexity of this wine, something acquired primarily from aging. It is the epitome of elegance, with bright acidity, and an intriguing melange of flavors, including green apple, citrus, salty notes, a mild mushroom  element and some herbal touches. Each taste seems to bring new flavors to your palate. This wine  will age well for many years to come, only gaining in depth and complexity. It receives my highest recommendation.

Yes,most of us can't afford to purchase this wine but the newer vintages are much more affordable as a splurge. And if you can lay down a current vintage for a  number of years, you'll be well rewarded when you finally open the bottle. 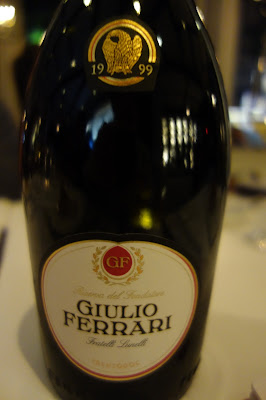 The 1999 Giulio Ferrari Riserva del Fondatore (n/a) was also crisp and elegant, though it seemed to be older than the 1993. Its fruit flavors were riper and included some dried fruit tastes, while it had more bitter herb flavors as well as a stronger mushroom taste. Though the dosage was the same, there was a touch of more apparent sweetness on the palate. It had a different taste profile than the 1993, and my clear preference was the 1993 The 2001 Giulio Ferrari Riserva del Fondatore ($130) is from a vintage which doesn't have the same aging potential as the other two .It certainly tastes fresh and young, with bright fruit flavors of apple and pear, with hints of brioche, vanilla and mild spice. Despite its age, it has some nice complexity and a lengthy, satisfying finish.

In the future, Marcello stated that the winery wanted to produce a Rosé version of Giulio Ferrari Riserva del Fondatore, though that is at least two to three years away. The Rosé would be more expensive, which is similar to how Rosé Champagne tends to be pricier than a Blanc de Blancs. 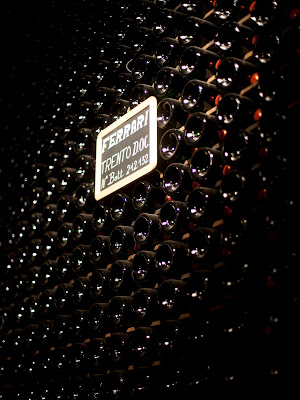 Marcello stated that they faced a challenge in the U.S., trying to spread the word about their sparkling wines, The Trentodoc wines are still largely unknown to many Americans and the Ferrari wines are certainly worthy of much greater recognition. If you love Champagne, you would love these Trentodoc wines too. The wines are high quality and delicious, made in a manner similar to Champagne and produced under strict regulations. They are all food friendly and present complex flavors which will delight your palate. Marcello was an excellent advocate for Trentodoc but it was his sparkling wines which were the most persuasive. And that 1993 will haunt me throughout this Halloween season.

Have you ever enjoyed a Trentodoc sparkling wine?
Posted by Richard Auffrey at 9:03 AM

These were the best I have ever tasted - truly a revelation! Hoping to encourage people to drink more sparkling wines and explore Champagne-style wines for occasions other than holidays as there is always something deserving a celebration and these wines are the ideal choice.