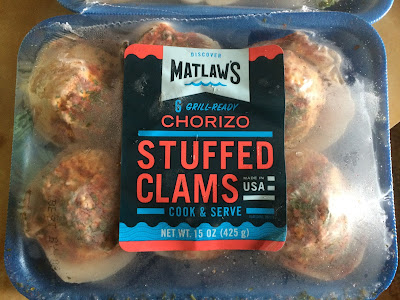 "She ate so many clams that her stomach rose and fell with the tide."
--Louis Kronenberger

In New England, Stuffed Clams are a traditional seafood dish, and the basic recipe consists of chopped clams and a breadcrumb mixture. The breadcrumb mixture varies from recipe to recipe, and can include a variety of spices and herbs, as well as maybe some diced veggies and/or chopped meats. In Rhode Island, stuffed clams are commonly known as Stuffies. Stuffed clams were originally created as a way to stretch one's limited food supplies as well as providing some hearty carbohydrates. Now, they are eaten simply because they are delicious.

You could take the time and prepare your own stuffed clams at home or pick up some of the pricey, pre-made ones at your local fish market. Instead, you could go to your local grocery store and buy some inexpensive, frozen stuffed clams from Matlaw's.

Founded in the 1950s, Matlaw's is the second oldest seafood brand in the U.S. Most of their seafood products are processed at their facility in Gloucester and they also have a large Research & Development laboratory at their Gloucester facility. Besides being a largely local company, they are also dedicated to sustainability, which is very important. Their parent company, National Fish & Seafood, is a founding member of the Global Aquaculture Alliance. When you purchase Matlaw's products, you generally can feel secure that you're purchasing a sustainable seafood product.

Maltaw's has been making Stuffed Clams for over fifty years, and their product line has expanded to include many other products, such as Seafood Paella, Buffalo Popcorn Shrimp, Salmon Burgers, Panko Breaded Cod, Stuffed Scallops, and more. I've written before, on multiple occasions, about how high-priced seafood prevents many people from eating more seafood, which is one of the healthiest foods you can consume. Fortunately, the vast majority of Matlaw's seafood products cost less than $10, making it very affordable for almost any budget as one package can usually feed multiple people. You can thus receive all the health benefits of seafood consumption, at a very low price. 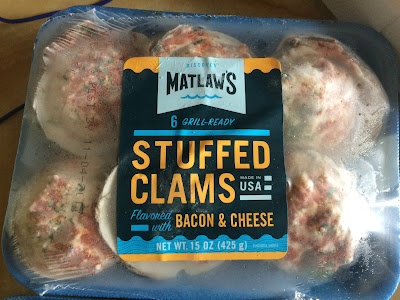 The Stuffed Clams are very simple to prepare. Just pull them out of the freezer and bake them in the oven at 450 degrees for about 30 minutes. It would be an easy appetizer or a side dish for an entree. Or, you could also make them the center of your dinner. In addition, you can prepare these on the grill. Just preheat your grill to 350-375 degrees and then place the clams directly on the grill. Close the lid and cook them for about 30-35 minutes. An easy summer grilling treat, and a great addition to the usual grilled fare.

The basic New England Style Stuffed Clams are made with chopped clams, breadcrumbs, minced celery, red & green peppers, paprika and parsley. The stuffed clam is fairly moist, with plenty of tender clam pieces and a nicely spiced taste. They taste as good as many freshly made stuffed clams that I've had. And all three of the different stuffed clams I tasted were similar in this respect. If you served these to a guest, it's doubtful they would realize these were previously frozen. 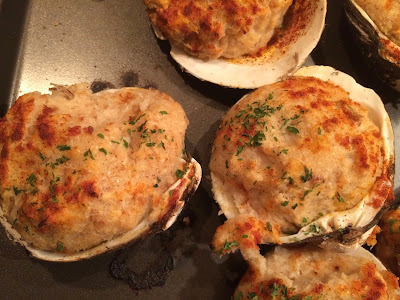 The Bacon & Cheese Stuffed Clams are made with chopped clams, breadcrumbs, cheese and bacon. These were very cheesy, with a slightly smoky flavor from the bacon, and a milder flavor than the basic version as it appears they have less spices in them. 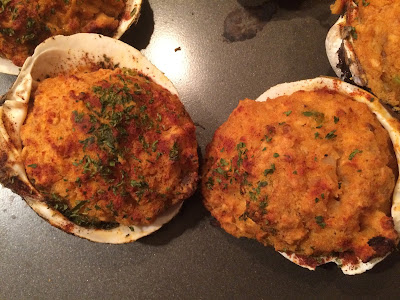 My favorite of the three were the Chorizo Stuffed Clams, made with chopped clams, breadcrumbs, spicy Spanish chorizo pork sausage, minced red & green peppers, and celery. These were boldly flavored, with a slightly spicy kick and the added savoriness of the chorizo. I think these would have been even better on the grill. All of my dining companions enjoyed these stuffed clams the best.

At their low price, the Matlaw's Stuffed Clams are a great value. They are simple to prepare and taste delicious, as good as most freshly made stuffed clams. Though you can eat these year round, they will be great this summer, whether in the oven or on the grill. I enjoyed some of these stuffed clams with a nice French Rosé wine and the Chorizo ones would pair well with a light red wine as well.
Posted by Richard Auffrey at 2:30 AM

Thank you very much for writing such an interesting article on this topic.
Gourmet Chocolate Brands | Wrapped Chocolates for Weddings | Nearest Chocolate Shop & Store