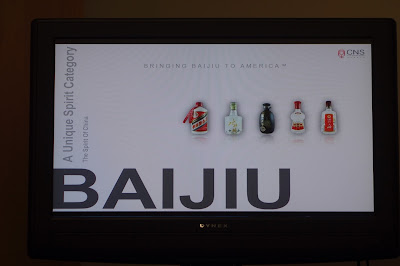 How is Baijiu commonly consumed in China? What are some of the rituals and customs involving Baijiu?

First, and very importantly, traditionally the Chinese do not drink alcohol to get drunk. Alcohol is a significant aspect of their social interactions but moderation is expected, even when consuming a high alcohol spirit like Baijiu. It helps that Baijiu is nearly always consumed with food, helping to dilute the alcohol they drink. It is interesting though that the Chinese chose to embrace such a high-alcohol spirit when moderation is supposed to be the norm.

When you order Baijiu, you always order it by the bottle rather than the class as it is a social drink, not something to drink on your own. The bottles may have intricate closures, which give evidence that the Baijiu is authentic and not counterfeit. It seems counterfeiting Baijiu is a significant enough problem for producers to protect their Baijiu with clever closures.

The price of a Baijiu is often indicative of the status of the purchaser, so people try to buy the most expensive bottle they can afford. This also fits into the Chinese custom of gift giving, as you try to give the most expensive gift possible. Producers also specifically make the boxes which hold their Baijiu to be aesthetically pleasing, to enhance its status as a gift.

Baijiu is commonly served at room temperature or warmed and will be served in small cups, maybe half an ounce. Liken the Japanese custom of oshaku, you are not supposed to pour your own cup. You'll toast your way through a meal, doing maybe 10-15 shots of Baijiu. There are basic rules for toasting, including who should toast, what you should toast to, and more. The basic toast, a form of "cheers, is Ganbai. When you toast, you clink your glass with someone elses though you lower your glass as a sign of humility and respect. However, the other person will also try to clink their glass lower than your own, which can lead to a struggle to see who can do it the lowest. It is also considered impolite to refuse a drink when it is offered.

For a few thousand years, the Chinese have also participated in Jiuling, drinking games, and many different ones have developed, from simple dice games to more cerebral games involving guessing the identity of literary works and poems. The loser in these games has to take a drink. This isn't like beer pong though, as the objective is not to get drunk. In fact, the games were created specifically to try to limit over drinking. Such a different philosophy than how many Americans see the role of drinking games.

During the Baijiu seminar, presenter Manny Burnichon stated that the best way to drink Baijiu is to consume an entire shot rather than gently sip it. It should make you feel warm without giving you a burn. You should also find the higher quality Baijiu to be complex and smooth, with many layers of flavor. During our tasting at the seminar, we drank shots of each of the five Baijiu, and there generally wasn't any spitting involved, especially considering the high price of several of the Baijiu. 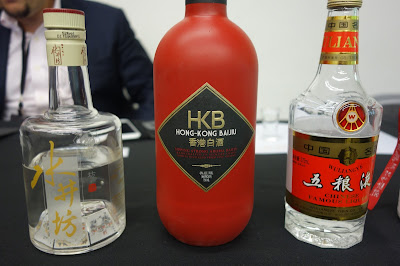 We started our tasting at the start of the seminar with a Mai Tai made with Hong Kong Baijiu.  It was delicious, fruity and fragrant with a touch of earthiness. This is the type of cocktail that would appeal to many people and was a very good introduction to the potential of Baijiu. Later, at home, I also made my own Hong Kong Baijiu cocktail, combining it with some tropical fruit juice, and it was delicious, with a slightly unique taste which would clearly differentiate it from white rum or vodka.

To appeal to more Americans, a few Baijiu producers have created some lighter, lower-alcohol Baijiu which are intended to act as a gateway to an appreciation for Baijiu. That is certainly an excellent idea, to ease Americans into this complex and intriguing spirit. As I mentioned before, you don't start someone new to Scotch with a peaty Laphroiag but rather with a milder, lighter Scotch. One of the lighter, lower-alcohol Baijiu brands is Hong Kong Baijiu (HKB)($55/750ml), and it was the first Baijiu we sampled during the seminar.

The creator of HKB is Charles Lanthier, a Frenchman who lived in China for several years and partnered with a small Baijiu producer in Sichuan province. Made in small batches, the HKB is composed of a blend of five grains, including sorghum, glutinous rice, rice, wheat and corn. Only organic ingredients are used, and fermentation occurs in old mud pits before it is distilled in a pot still. It is then aged for several years in one ton, terra-cotta jars which are buried outside up to their necks.

HKB is categorized as a Strong Aroma Baijiu and has a 43% ABV.  It was smooth and fruity, with herbal accents, a touch of sweetness and a lengthy, pleasing finish. There weren't any aromas or flavors which would turn people off, and it would definitely be an easy way to introduce people to Baijiu. It also seems versatile and would work in a variety of cocktails. It could be as simple as substituting HKB for a white liquor in a classic cocktail.

Charles Lanthier also provided me his three reasons why people should try HKB. First, it is a blend made in Sichuan specifically for western consumers containing all the characteristics of a genuine Baijiu, presented in a softer and more balanced way. Second, it is a blend that was designed to be highly mixable, which can be enjoyed in a wide variety of cocktails. Lastly, you get a high quality Baijiu for only abut $50 for a 750ml bottle, compared to many other Baijiu of similar quality which can retail from $70-$130 for only a 375ml bottle.

Next up was the Luzhou Laojiao Zisha ($65/375ml), another Strong Aroma Baijiu that is produced by a distillery in the Sichuan province which was founded back in 1573 during the Ming Dynasty. It is bottled in grainy, unpolished porcelain (see the bottle on the right side on the photo below), which is intended as an homage to this lengthy history and tradition. It is the #8 most valuable spirit brand in the world and the Zisha is bottled at 51% ABV in a 375ml for the export market. This Baijiu is made from a blend of about 60% sorghum, 20% rice and 20% wheat. I found this Baijiu to have more tropical fruit flavors with a hint of licorice and peppery notes. It intrigued my palate with its complexity and layered flavors. Once again, I didn't find any aromas or flavors which would turn off most people. 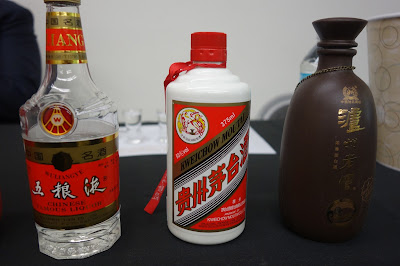 Our third Baijiu was from Shui Jing Fang Wellbay ($90/375ml), which is the oldest verifiable distillery in China, having been founded in the Sichuan province in 1408. About five years ago, the distillery was purchased by Diageo. This Baijiu, another Strong Aroma, is made from a blend of 36% sorghum, and 64% other grains, including rice, glutinous rice, wheat and corn, and has a 51% ABV. The palate on this Baijiu presented an intriguing melange of flavors, including tropical fruits like pineapple and banana, with hints of licorice and some earthy notes. It was smooth and well balanced, with a lingering finish, ending with a slightly bitter note. With its earthy element, this wouldn't be the best Baijiu to introduce to a newcomer, but it also isn't overly earthy and I enjoyed it very much.

Wu Liang Ye Baijiu ($180/375ml) is produced in the city of Yibin in the Sichuan province, and Baijiu production in this city extends back to the Ming Dynasty, sometime from the latter 14th century to the mid-17th century. Around 1900, one of the distillers created a five-grain recipe, which is still used today for their Baijiu, and the term Wuliangye translates as "five grain liquid." In 1951, eight distilleries in Yibin were consolidated, becoming the Yibin Wuliangye Distillery in 1959. It is now the second most popular Baijiu brand in the world. Made from an organic blend of sorghum, wheat, rice, glutinous rice and corn, this Strong Aroma Baijiu has a 52% ABV. On the palate, it was reminiscent of the taste profile of the Shui Jing Fang Wellbay but it was a bit more earthy and there was much more pineapple than banana.

We ended the tasting with the famous Kweichow Moutai ($170/375ml), a Sauce Aroma Baijiu, and the #1 top selling spirit brand in the world. The town of Moutai, in the Guizhou province, has been producing Baijiu for a few hundred years and in 1951, the different distilleries were consolidated into a single company, Kweichow Moutai Winery. It is the official state liquor of China and about 200 tons of Kweichow Moutai are sold in over 100 countries. Rather than use mud pits for fermentation, they use brick pits and this Baijiu is made from 100% sorghum and has a 53% ABV.

In the above picture, you can see the Moutai bottle in the middle, with its red and white colors. To most Americans, that doesn't look like what you would expect from such an expensive spirit. It seems almost like cheap packaging, something for an inexpensive liquor. The Chinese certainly have a different aesthetic in this matter. This Baijiu had the strongest, most funky aroma of the five and there was much more earthiness on the palate, with a complex blend of hints of licorice, herbs, nuts and spices. This is certainly not a Baijiu for newcomers and the unique flavors will appeal more to a select audience. The Moutai reminded me of some Kimoto/Yamahai Sakes, which possess an earthier and gamier flavor. It's not for everyone, but the right audience will appreciate it. 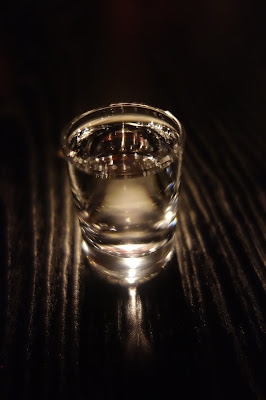 I also recently had the opportunity to taste another Baijiu, during a media visit to Wu Er Barbecue in Brookline. I had a shot of the Jian Nan Chun, a distillery with a history of over 1000 years. This is a Strong Aroma Baijiu, with a 52% ABV, and is made from a blend of sorghum, rice, glutinous rice, wheat and corn. This reminded me in some ways to the HKB, being smooth, light and fruity, with a hint of appealing licorice flavor. There was no burn as I drank it, and the aromas were appealing.