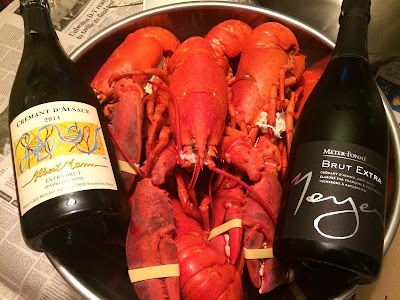 January 1, 2018: I chose to open two bottles of Crémant d'Alsace as a delicious way to start the New Year. My first wines of 2018, paired with 12 pounds of Homarus americanus, the American Lobster. Bubbles and the Bounty of the waters of Maine.

Simply put, Crémant d'Alsace is a French sparkling wine from the Alsace region. In Alsace, they have been producing sparkling wines since the early 19th century but it wasn't until 1976 that the Crémant d'Alsace AOC was created. It's produced in a similar fashion to Champagne, though there are some differences as well. The term "crémant" means "creamy" and originally referred to sparkling wines that were produced with less pressure, which tended to make them taste more creamy than effervescent.

The Crémant d'Alsace AOC has strict regulations on viticulture and viniculture, and six grapes are permitted including Pinot Blanc, Riesling, Pinot Gris, Auxerrois Blanc, Chardonnay, and Pinot Noir. Most of their Blanc de Blancs is made from Pinot Blanc while Pinot Noir is the only grape permitted in their Rosé. Total production of Crémant d'Alsace, which comprises about 22% of the region's production, is about 33 million bottles. However, only about 300,000 bottles are imported into the U.S.

Americans need to drink more Crémant d'Alsace! In fact, Americans need to drink more wines, of all types, from Alsace. As I've said repeatedly before, the wines of Alsace are generally not on the radar of the average consumer but they should be. They can often provide excellent value and taste. They are enjoyable while young but can also age well. They can provide a sense of history, as well as showcase state of the art wine making. They pair well with a diverse variety of foods and cuisines. And at their most basic, they are absolutely delicious. 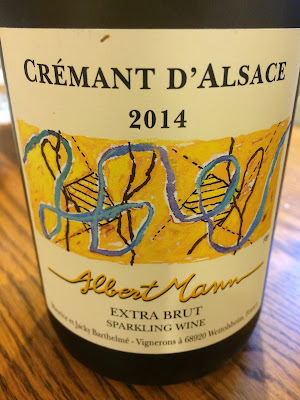 The first of the wines for the evening was the 2014 Domaine Albert Mann Extra Brut Crémant d'Alsace (about $24). The winery is a union of two families, Mann (who have been wine growers since the start of the 17th century) and Barhelmé (wine growers since 1654). Currently, the winery is owned and operated by Maurice and Jacky Barthelmé, with their wives, Marie-Claire and Marie-Thérèse. The Barthelmés believe: "The goal of the estate is to produce wine that is in harmony with nature. Wine is the memory of the grape and is capable of transmitting the taste of the earth." In adherence to this belief, their estate is certified organic and has been Biodynamic since 1997. Their estate includes 23 hectares of vineyards, broken up into about 100 separate plots, growing Riesling (29%), Gewurztraminer (20%), Pinot Blanc/Auxerrois (19%), Pinot Gris (17%), Pinot Noir (11%) and Muscat (3%).

This Crémant d'Alsace is a blend of Auxerrois, Pinot Blanc and Pinot Noir. With a fine golden color and a myriad of tiny bubbles, it possesses an alluring aroma, with elements of fresh fruit. On the palate, the Crémant is fresh, crisp and dry, with delicious flavors of green apple, pear and hints of lemon. Though it is fruit driven, there is complexity in the palate as well, with a touch of minerality and hints of spice. There is a light, elegant creaminess to this wine with a lengthy, pleasing finish, ending with more fruit notes. It livened up my mouth and brought to mind the coming Spring. It was my favorite of the two Crémants and at this price point is an excellent value. 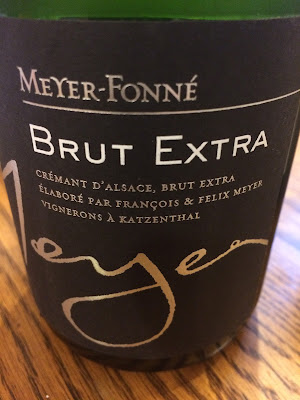 The second wine of the evening was the NV Meyer-Fonne Crémant d'Alsace Brut Extra (about $24). The winery is currently owned and operated by Félix Meyer, the third generation in his family since his grandfather founded the domaine in the late 19th century. The vineyards comprise about 12 hectares, over seven communes, each bringing its own unique terroir. Though the winery has been modernized, Félix still follows some traditions, such as aging wines on the lees in large, older foudres, and has a strong respect for terroir.

This Crémant d'Alsace is a blend of 60% Pinot Auxerrois, 20% Chardonnay, 15% Pinot Blanc, and 5% Pinot Noir. Many of those grapes are sourced from vines that are about 45 years old. The lees rest in the bottle for a minimum of 12 months before disgorgement. It's color is a bit paler gold than the Mann but has equally as fine bubbles. Its aroma is more subtle, with mild fruit and a hint of brioche.   On the palate, this Crémant is fresh, crisp and dry, with more savory notes, underlying apple and citrus notes as well as a backbone of minerality. There is a touch of bitterness on the palate too, which isn't off-putting, and adds complexity to the taste. The ending is long and satisfying and is also a good value at this price point. Though I preferred the Mann of the two, I still enjoyed this wine and it is worthy of my recommendation too. 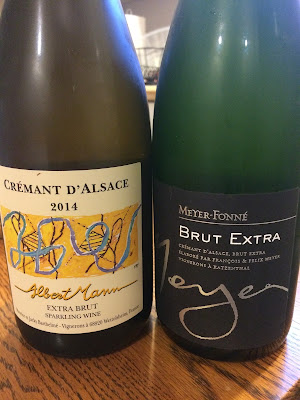 How did the Crémant d'Alsace pair with our lobster dinner? In general, Sparkling wine is a versatile food wine and often pairs very well with seafood. With the sweetness and rich of lobster, especially dipped in drawn butter, it helps to have a wine with good acidity and both of these wines possessed that trait. Plus, their tiny bubbles helped to cleanse the palate between bites. The complex flavors of the two wines also complemented the delicious lobster. It was a killer pairing, well appreciated by everyone at the table. And such a hedonistic way to begin the New Year.

(I received both of these Crémants as media samples.)
Posted by Richard Auffrey at 10:27 AM