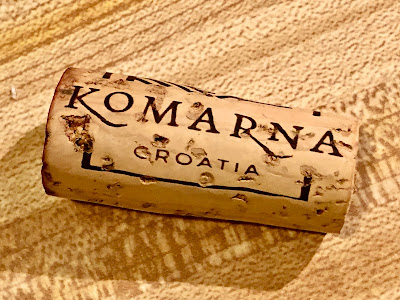 Seven Croatian wineries, all located in the Komarna Appellation, and their U.S. importer, Croatian Premium Wine Imports, Inc. (CPWI) have united to create a special wine, a Plavac Mali created from a blend of wines from all seven wineries. Such a collaboration is very rare in the wine world, though considering the closeness of the Komarna Seven (K7) Association, the seven wineries in this Croatian appellation, it makes much sense.

In 2008, the first grapes were first planted in the Komarna region, by the Rizman Winery, and five years later, in 2013, Komarna became a legally recognized appellation. There are only seven wineries in this appellation, and they have formed an association, agreeing to jointly abide by certain rules, such as all their vineyards must be organic. I've visited this region, and several of the wineries, and it's a fascinating area, producing some excellent wines, especially from indigenous grapes such as Pošip and Plavac Mali.

Thus, I was especially curious to sample their new collaboration, and recently received a media sample of the wine. The 2016 K7 Plavac Mali, which has just been released, is only available in the U.S., and Mihovil Stimac, the president of the Komarna K7 Association, commented, “We always wanted to create a joint label, but we are a young appellation and association, so the opportunity didn’t present itself until the Croatian Premium Wine team suggested we create a label for the US market, and we are thrilled we were able to get this done for the 2020 introduction.”

Win Burke, CPWI’s co-founder and CEO, stated, “In partnership with the Komarna wineries, we wanted to create a label specific for the American palate and the American market. This effort resulted in a very drinkable Plavac Mali with silky tannins and a special aroma characteristic of the Komarna Appellation. I believe this is the first of its kind joint venture where the wineries and importer are creating the wines, and we look forward to the feedback from the American wine lovers who will be the only ones able to taste it.”

To produce this wine, each of the seven wineries first produced their own Plavac Mali, in a similar style, and then submitted the wines to Josip Volarevic, the owner and oenologist of the Volarevic Winery. He is also a scientist and an academic, currently working on intriguing PhD research about the Plavac Mali grape. I've met Josip and he is a passionate and intelligent person, with an intense drive to best understand the Plavac Mali grape, conducting various experiments using this grape, so selecting him to create their blends was an excellent choice.

Next, Josip created several different blends from the base wines. The seven wineries then met together to select the final blend, through a blind wine tasting process. Once the final blend was selected, Terra Madre Winery began blending the wine in tanks at their winery, continuing the process through bottling and labeling. In addition, the seven wineries and CPWI finalized the K7 logo and label.

“I am delighted to be able to showcase this remarkable bottle of Plavac Mali - a result of a tight collaboration of people from my hometown - that to me represents the aromas of Dalmatia,” said Mirena Bagur, VP Brand Management at CPWI. “This is an elegant wine with a complex body and is drinkable at opening. Within a few minutes one can taste the typical jammy raisin flavor of Plavac Mali. We have shared samples with a few key wine bars, restaurants and stores, and the best feedback from them is that the wine is already on the shelves and on the menu in a few of them.” 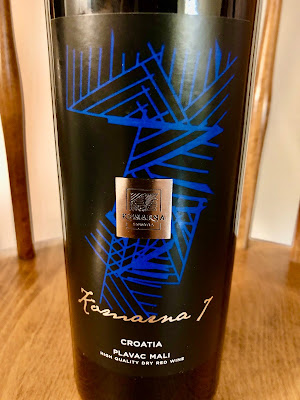 The 2016 K7 Plavac Mali ($19) is made from 100% Plavac Mali, is certified organic, and has a 14.5% ABV. The wine was aged for 24 months in a combination of Croatian, American and French oak barrels. It possesses a medium-red color, slightly translucent, and the initial aromas include black fruit and subtle spice. The wine was a little tight at first, but within 30-60 minutes after being poured, it opened up beautifully. I'd suggest decanting the wine maybe an hour before drinking, to give it a some time to open up.

This wine presents an interesting complex melange of flavors, including blackberry, plum, blueberry, black pepper, hints of vanilla, and a touch of chocolate. Some very typical Plavac Mali flavors. It also possesses a lengthy, satisfying finish, pure deliciousness. The tannins are moderate, and it's a wine that is probably best accompanied with food, something hearty, a juicy steak or even just a burger. I paired the wine with Chicken Parmigiana in a spicy Arrabbiata sauce, and it was a pleasing pairing.

At only $19, this wine is a very good value too, and an excellent introduction to Croatian wines and the Plavac Mali grape. It earns my hearty recommendation. The K7 Association will even continue to make further vintages of this collaborative wine. So, you might want to buy an extra bottle or two to store in your cellar, to later compare with future vintages.
Posted by Richard Auffrey at 3:00 AM