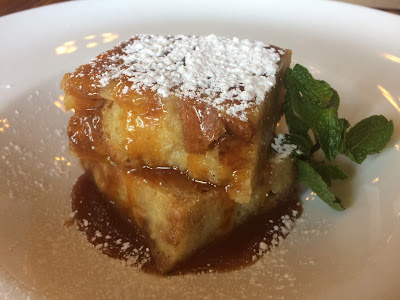 We need more Bread Pudding, more restaurants willing to place it onto their dessert menus, more bakeries willing to offer it, and I'd even love to see a bakery specialize in Bread Pudding. So why hasn't this happened yet?

The origins of Bread Pudding extends back to the 11th century, as people tried to find ways to use their stale bread. A couple hundred years later, in England, it was known as "poor man's pudding" because it was popular with the lower classes. Essentially, Bread Pudding is made with some type of bread over which a custard-like sauce is poured before it is cooked. Numerous other ingredients can be added, from nuts to fruits, and you can use any type of bread, or bread-like food, such as muffins or donuts. It is relatively easy to make, versatile and can be absolutely delicious.

Cupcakes and froyo have already had their time in the spotlight. It's time for something else, another dessert to take the world by storm. My vote for that candidate goes to Bread Pudding. I've been hoping for this for numerous years, wanting some adventurous entrepreneurs to go forward with this idea. There was a bread pudding bakery in California, which advertised 108 flavors, broken down into Classics, Chocolates, Fruits and Seasonal. Why can't such a bakery start up in the Boston area?

A few local restaurants offer Bread Pudding, and my favorite is created by Chef Marisa Iocco at Spiga, in Needham, and which is pictured at the top of this post. I first tasted her Bread Pudding back in 2009, and it captivated me then, being just as delicious now as it was all those years ago. I've told people they should start their meal with the Bread Pudding, to prevent them from being otherwise too full to eat it after dinner.

Chef Iocco even allowed me to post a recipe for her Bread Pudding, though you're on your own for creating a sauce to top it.

Directions:
--Remove the bread heels and cut bread into small cubes
--In a saucepan, combine cream, milk, sugar and vanilla bean, and bring to a slow boil. Remove the mixture from the heat and allow it to cool and steep for one hour.
--In a bowl, whisk the eggs, then pour in the vanilla-cream mixture and stir. Next, add the bread cubes and allow it to sit just long enough to soak up most of the liquid.
--Pour mixture into a rectagular cake pan at least 4” deep. Cover tightly with foil. Place that pan into a slightly larger pan, then add about two inches of water to the larger pan to create what’s called a “bain marie” or water bath. This provides moisture during baking.
--Bake at 375 degrees for two hours. Remove from oven; let pudding “set” briefly. Cut into squares. Serves 8 generously.

Readers, would you support a local bakery specializing in bread pudding? What local restaurants have you enjoyed bread pudding? Do you make bread pudding at home?
Posted by Richard Auffrey at 9:48 AM