A Tavola in Winchester: Welcome To The New Owner, Chef Joe Carli 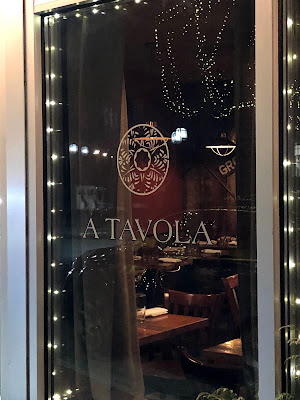 Change is in the air at A Tavola in Winchester and there's good reason to believe those changes will be positive, exciting and delicious.

Back in November 2011, Chef Vittorio Ettore, the owner of Bistro 5 in Medford, opened a second restaurant, A Tavola. Initially, it was an excellent restaurant, becoming one of my new favorites, offering compelling Italian cuisine. However, over time, and with a number of different chefs working at the restaurant, I, and others, felt that the quality of the cuisine had slipped and I stopped dining there. Throughout all this time, Bistro 5 has remained one of my top favorites, being consistently excellent. 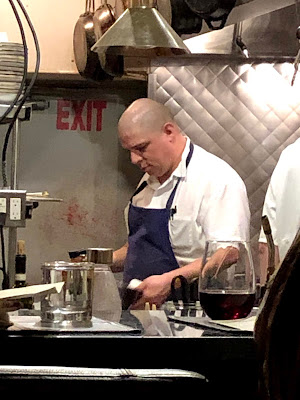 I've known Chef Carli for a number of years, and he has worked at a few of my favorite restaurants, listed in my Top 50 Restaurants of 2019, including Osteria Posto, Posto, and Bistro 5. From July 2010 to October 2013, Chef Carli worked for Vittorio Ettore at Bistro 5, so it's understandable why Chef Ettore chose to sell A Tavola to Chef Carli. After leaving Bistro 5, Chef Carli worked at Posto, in Somerville, and most recently, he worked at Osteria Posto in Waltham. His dream has to been to own his own restaurant, and that dream has now become a reality. He now has an outlet for his culinary passion, and I believe we can expect some exciting things from him. 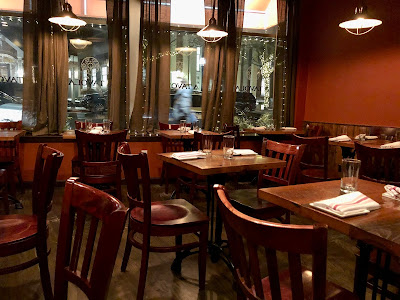 The physical restaurant hasn't really changed, and it is still a medium sized restaurant with an intimate feel, including 6 seats at a small bar looking into the open kitchen. Those are some of the best seats in the restaurant as you can watch Chef Carli and his staff preparing your dinner. I've always been a fan of open kitchens, enjoying the sight of the chef and his assistants preparing various dishes. I'd strongly recommend making reservations, especially on the weekend, and even during the week if you want one of the bar seats. 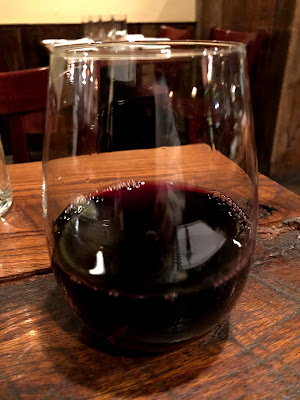 On their Drinks menu, you can start your meal with an Apertivo ($11-$14), such as an Aperol Spritz, Campari & Orange, or an Italian bubbly. They also stock about 9 Beers ($6-$12), two on draft, and including some local brews and a Cider. Their Wine list includes all Italian wines, with 12 wines by the glass, 6 whites and 6 reds, available in 6 ounces ($11-$14) or 9 ounces ($15-$18). There are about 31 wines by the bottle, priced $43-$149 with about half under $60. It's an interesting list, that doesn't contain the usual suspects, and offers plenty of good choices, from many different regions of Italy. Wine lovers should find plenty to intrigue their palate. It's also interesting that they serve their wine in stemless glassware.

One evening, I had a couple different glasses of wine, including the 2016 Pietra Pinta Nero Buono, made from an indigenous Italian grape. Delicious black fruit with spicy notes, good acidity, and smooth tannins. An excellent companion for many of the restaurant's various dishes. Highly recommended. The 2015 Duca di Salaparuta Lavico Nerelo Mascalese is a more tannic and serious of a wine, with black cherry, ripe plum flavors and dark spices. It works best with heartier meat dishes. 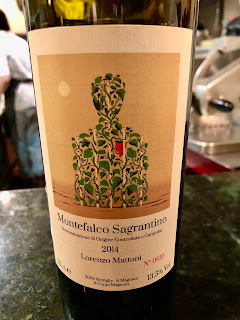 On another visit, we enjoyed a bottle of the 2014 Lorenzo Mattoni Montefalco Sagrantino ($76),  which only has a 13.5% ABV, refreshing for a red wine. Tasty flavors of cherry, blackberry, and plum with subtle spices notes, well-integrated tannins, and a lengthy, pleasing finish. Another wine which would pair very well with many dishes at the restaurant. It was very easy to finish off this bottle, and enjoy throughout the course of our dinner. 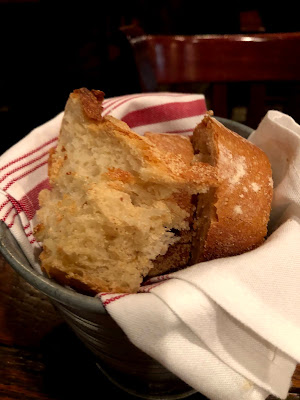 For food options, there is a Regular Menu and a chalkboard of Specials. On the Regular Menu, you'll find Antipasti ($4-$22), such as Funghi (mushrooms and egg), Formaggio (cheese), Antipasti Plate (meats, dips, veggies), Insalata, Zuppa (Tomato soup), and Poplo (crispy seared octopus). The Secondi ($22-$32) includes items like Bigoli (thick spaghetti, prosciutto, oyster mushrooms, cipolline), Tagliatelle (Bolognese, parmigiano, basil), Manzo (braised short rib), and Pesce (chef's choice fish). All of their pasta dishes are also available as in appetizer size, making it easier to sample several dishes. And on every Wednesday, they offer two Flatbreads, including a Margherita ($12) and Chef's Special ($15). On the Specials board, you'll usually find about another ten items, including Antipasti, Secondi, and Desserts.

As A Tavola is a farm to table restaurant, the availability of a number of ingredients will vary, dependent on what is available at local farms and markets. Sometimes, the chef will get fortunate and be offered a whole heritage pig, duck or rabbit. Then, he uses his creativity to produce special dishes for the day, and the dishes may be of limited availability. If you follow A Tavola on Facebook, you can see what new dishes are being offered each day.

In addition, they offer a Take-Out Menu, including items such as Antipasto, Insalata, Zuppa, Pasta Dishes (including a few not on the usual menu), and Grilled Flatbreads (Wednesday only). On the evening I sat at the bar in front of the kitchen, I saw a fair amount of take-out dishes prepared. There is also a Take-Out Catering menu, offering large trays for 8-10 people.

While dining there, and after ordering your dinner, you'll receive complimentary, warm bread and oil. The bread has a nice, crusty exterior with a softer interior bread, and also would be good for dipping in the sauces of some of their dishes. 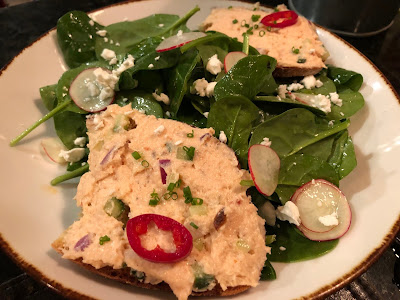 As for Antipasti, a Special one evening was the Spinach Salad ($13), made with plenty of fresh spinach leaves, sprinkled with pieces of goat cheese, and with two good-sized pieces of crisp toast topped by a creamy and flavorful salmon rilette. 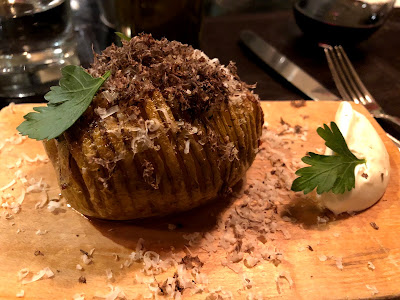 Another Special was the Truffled Hassleback Potato ($12), accompanied by a dollop of sour cream. The potato was thinly sliced, tender and with a pleasing truffle taste. 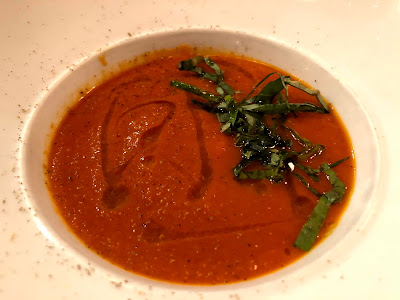 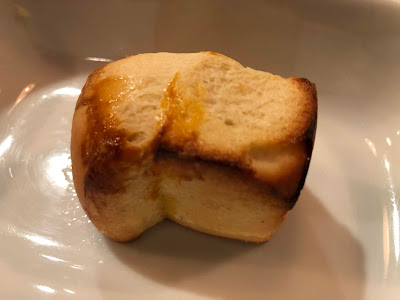 On the Regular menu, the Zuppa ($13), was a delicious Tomato Soup, accompanied by a little brioche roll. The soup had a rich tomato flavor, a nice texture, and a touch of spicy heat, while the brioche was perfect for dipping into the soup. 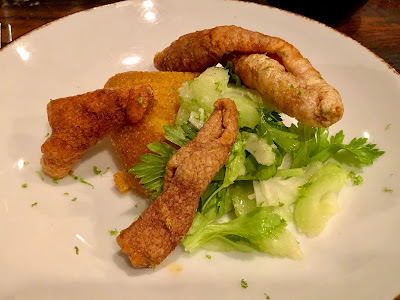 Another Special was the Corn Bread, made with a chili lime powder, and accompanied by celery hearts and crispy pork crackers. Though the corn bread had a nice flavor, with a touch of lime and a hint of spice, but it was a bit too dry. The chef later realized, on his own, that the corn bread was too dry and adjusted the dish accordingly. The crunchy pork crackers were tasty, with a salty kick. 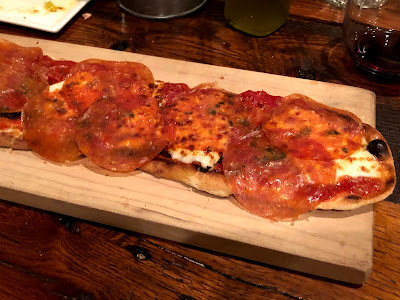 One of my trips to A Tavola was on a Wednesday, so Flatbreads were on the menu. I opted for the Pepperoni Flatbread ($15), a lengthy oval, with a thin crust, plenty large and thin slices of pepperoni, and lots of melted cheese. The pizza sauce was flavorful and tasty, and the entirety of the flatbread was quite appealing. I savored every bite and would definitely order a flatbread again. 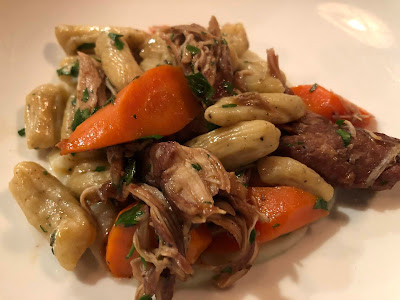 As for the Secondi, I ended up selecting a variety of pasta dishes on my visits, especially as most were Specials and sounded so appealing. The pasta dishes were all stars, delicious and nicely composed. One of my favorites was the Black Pepper Cavatelli ($31), and the above photo shows a half-portion. Two of us decided to share this dish and the kitchen split the dish into two plates for us. The cavatelli had a perfect texture, just the right firmness, with a pleasing black pepper element. The pasta sat atop a creamy layer of celery puree and was topped by an ample portion of tender, braised rabbit. I love rabbit and this dish was so compelling. The dish also had carrots, which had just the right amount of crunch to them, neither too soft nor too hard. A hearty, superb dish. 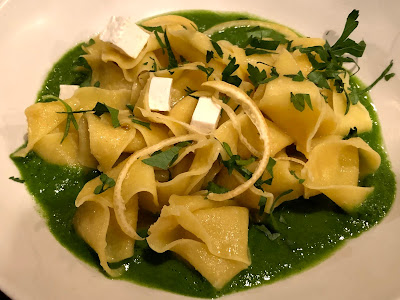 The Sopressini ($26), is made with a parsley pistou and cubes of ricotta salata. The pasta, cooked perfectly, was like little folded pasta packages, enhanced by the pistou, with hints of garlic and herb. The salty cheese, almost feta-like, was a nice addition to the dish, adding some texture as well. Another tasty pasta dish. 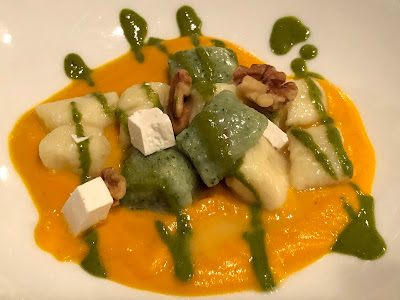 From the Regular menu, I ordered a half-portion of the Gnocchi, potato dumplings, in a carrot brodo with a sage-walnut pesto and ricotta salata. The pillowy gnocchi were well-made, and the brodo had a pleasing carrot taste, with a little sweetness, that was balanced by the salty cheese and the pesto and walnuts. 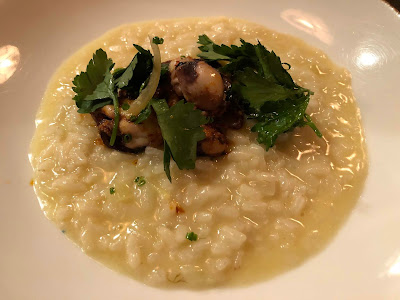 Another Special one evening was the Risotto ($32), and the above photo is also a half-portion, which the kitchen split for us so we could share this dish. The creamy and flavorful risotto, with perfectly firm rice, was topped by very tender baby octopus, with 'nduja and preserved lemon. The 'nduja added a nice spicy kick to the dish, with a little sweetness and acidity from the lemon. Another well-composed and delicious dish. 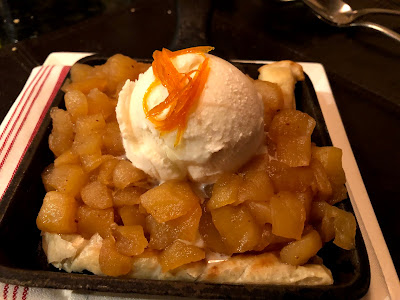 The Dessert Menu has 6 choices ($9-$14), such as Formaggi (daily cheese selection), Torta (dense chocolate cake), and an EVOO Cake. Each dessert is paired on the menu with a suggested after-dinner drink. From the menu, we chose the Mela ($12), a warm apple tart with whiskey gelato and candied orange zest. This good-sized dish had plenty of tender chunks of apple, atop a light, flaky pasty, and the gelato had a pleasant hint of whiskey. 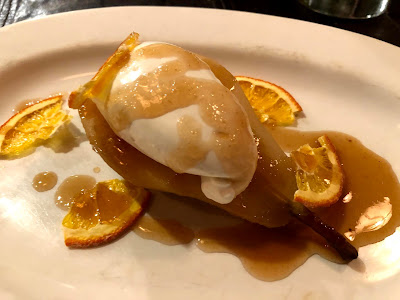 A Special one evening was the Marsala Poached Pear ($12) with orange chips and hand-made vanilla cream (which we watched being made). The peach possessed a nice firmness, yet not too hard, and the combination of the cream and orange made for a mildly sweet and delicious dish. 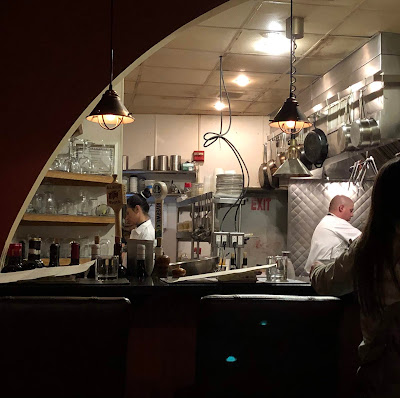 Service was excellent, professional and accommodating. The quality of the food is high, and Chef Carli is only just getting started with his restaurant. Changes will be coming and I expect they will be largely positive. The chef's pasta dishes are definitely a major strength, though I need to return to check out some of the meat and seafood dishes. I saw an Osso Buco dish one evening that looked quite alluring. Their farm to table philosophy is also compelling, highlighting fresh and local ingredients. The wine list possesses plenty of interesting choices and I love the fact they've chosen to carry only Italian wines. Chef Carli has brought me back to A Tavola, and I'm already thinking about my next visit.

I highly recommend that all of my readers check out A Tavola in Winchester and experience Chef Carli's Italian cuisine!
Posted by Richard Auffrey at 9:08 AM