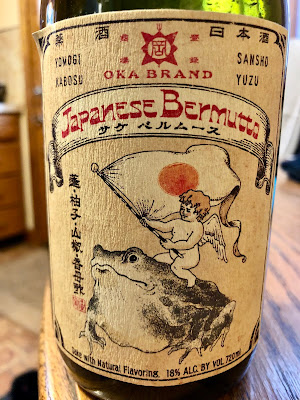 We all know how Japanese whiskey, in less than 100 years, has taken the world by storm, producing some of the world's best expressions, garnering high prices. Japanese gin has also become very popular recently, especially those using indigenous Japanese ingredients. Will Vermouth be the next big thing to come out of Japan?

Vermouth is a fortified and aromatized wine, that has been flavored with a blend of botanicals. In 1786, Antonio Benedetto Carpano, of Turin, Italy, coined the term "vermouth" for a wine flavored with wormwood. However the history of wine with added botanicals has a much lengthier history, extending back thousands of years to the Chinese.
However, Vermouth rarely receives the respect it deserves. As I've said before, "It's a wine with a fascinating history that extends back thousands of years...It can be delicious and complex, intriguing and diverse, and offers a template upon which a producer can put their individual stamp."  Unfortunately, many people don't even realize that it's a wine, thinking it's only a minor ingredient for cocktails. Sure, vermouth works great in cocktails, but it can also be enjoyed on its own, or as the starring ingredient in a cocktail. There are numerous producers taking Vermouth seriously, creating some unique and fascinating Vermouths, from a wide range of base wines and botanicals.

Japan has a lengthy history, going back at least as far back as the 9th century, of adding herbs, spices and other ingredients to Sake. For example, O-toso was a Sake that originally was mixed with eight herbs, including cinnamon bark, rhubarb, sansho, okera, kikyou and others. The word toso literally means “to kill an evil” and was made as a medicine, to promote digestion, lower fevers, suppress coughs and more. It became a New Year tradition, which some Japanese still follow.

According to The Standards of Identity of the Alcohol & Tobacco Trade Tax Bureau (TTB), Vermouth is defined as “a type of aperitif wine compounded from grape wine, having the taste, aroma, and characteristics generally attributed to vermouth, and shall be so designated.” Although these same regulations define Sake as a “wine,” it is not compounded from grape wine, so Sake cannot legally form the basis for Vermouth in the U.S.

The Tsutsumi Distillery, which apparently has created the first modern Sake “Vermouth” in Japan, has found a way to sell it in the U.S. Rather than refer to it as Vermouth, they called it Bermutto, a loanword. Though it's not a traditional Vermouth, it derives from a lengthy history in Japan, and certainly is a fascinating creation which closely resembles a dry, French vermouth.
The Tsutsumi distillery, located in the Kumamoto prefecture, was established over 140 years ago and its primary business has been the production of Shochu. The World Trade Organization declared that Kuma Shochu (shochu made from just rice) is protected as a geographical indication, and Tsutsumi is one of only 28 distilleries certified to produce Kuma Shochu.

Kumamoto, also known as Hi no Kuni, "the land of fire,” has over 1000 natural springs, and each spring has different water types, from soft to hard, so the local breweries and distilleries get a more unique terroir from their water sources. After World War II, this region was also known for the development of Kumamoto Kobo, a yeast, which eventually became known as the famed Number Nine yeast, said to produce Sake that is “lively and fruity in aromas, and smooth in taste.” This yeast also helped promote Ginjo Sake.

The Oka Brand Japanese Bermutto ($28) is made from a base of Junmai Sake, which is fortified with Kuma Shochu, a 100% rice Shochu, and has an 18% ABV. Four botanicals are added to it, including Yuzu, Kabosu, Sansho & Yomogi. Yuzu is an aromatic citrus, which adds some acidity as well to the blend. Kabosu is also a type of citrus, with lots of acidity, and has a juicy, sharp taste. Sanshō is a type of Japanese peppercorn while Yomogi is known as mugwort, or Japanese wormwood, adding that typical Vermouth taste.
The bottle has an interesting label, with a winged cherub, sitting atop a frog, carrying the Japanese flag. The label also lists all four of the botanicals within the Bermutto.

Tasting it on its own, the Bermutto has a prominent yuzu/citrus aroma, with a subtle herbal accent, and on the palate, it is dry and the yuzu/citrus remains the main flavor, with hints of herbal notes and a mildly bitter finish from the Yomogi. That bitterness is much more restrained than the wormwood taste found in many other vermouths. I also feel that the Bermutto lacks some of the depth of complexity possessed by some other artisan Vermouths.
I chose to mix it with some club soda, which I've done before with other vermouths, making it the star of the drink. It worked very well, making a refreshing and tasty drink, bright with citrus, and it would probably work well with white liquors like vodka and gin. If you want a dry martini, the Bermutto would be a fine substitute for your usual vermouth.
I hope that Japan continues to produce their own variations of "vermouth," using their indigenous botanicals to create unique and compelling drinks. The Oka Bermutto is a good start but there is a vast potential which Japan can tap.
Posted by Richard Auffrey at 3:00 AM