Pizza History in the U.S. (Part 2): The True Origin of Hawaiian Pizza 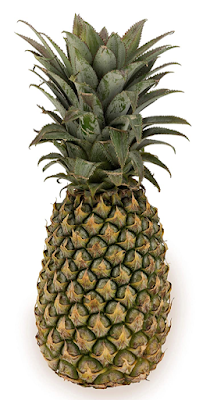 Do you like pineapple on your pizza? This topping generates much passion, both for and against its inclusion on pizza. No other topping seems to cause such controversy. So, what led someone to first decide to add pineapple to a pizza, creating a Hawaiian Pizza?
The most widely accepted origin tale, and which is rarely contested, is that a Canadian invented Hawaiian pizza in 1962. However, that isn't the truth. Pineapple on pizza existed for at least nine years before its alleged invention in 1962.
First, let's examine the popular origin story. Sam Panopoulos, a Greek-born Canadian, operated the Satellite Restaurant in Chatham, Ontario. Initially, the restaurant didn't even serve pizza as it was still difficult to find anywhere in Canada. When they started to expand their menu, adding some Chinese cuisine, they also decided to make pizza. In 1962, Sam and his brothers decided, as a lark, to add some canned pineapple to a pizza, allegedly calling it Hawaiian Pizza after the name on the can. Initially, their customers didn't like the Hawaiian pizza, so eventually, after some experimentation, they added ham to the pizza, and the combination became much more appealing to their customers.
The problem is that there are documented references to Hawaiian Pizza for a number of years before 1962.

The first documented reference that I've found concerning pineapple on pizza was in the American Restaurant Magazine, V.37, 1953.  It stated, “Other pizzas offered include a green pepper with sausage, regular sausage, and anchovies and cheese. During Lent a shrimp pizza is offered and a pineapple pizza also has been made available at times.”  Unfortunately, the complete magazine isn't available online so I don't have sufficient information concerning the name and location of the restaurant serving this pineapple pizza.

The Honolulu Advertiser (HI), December 27, 1956, in an article titled, Tiny Pineapple Pizzas Popular, .provided a newly developed recipe for Tiny Pizza. It noted that instead of using a yeast dough, you could use an English muffin or hamburger bun. Then, it was to be topped with sausage, garlic salt, pepper, well-drained pineapple tidbits, tomato paste, Cheddar cheese, and grated Paremsan. This is the first pairing of pineapple and a pork product, and the recipe article was reprinted in numerous other newspapers, in places including Connecticut, Illinois, Florida, Texas, Georgia, Pennsylvania, and Iowa. 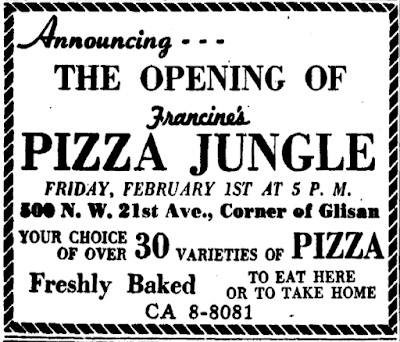 On February 1, 1957, Francine's Pizza Jungle opened in Portland, Oregon, and their initial advertisement stated they served over 30 varieties of pizza. 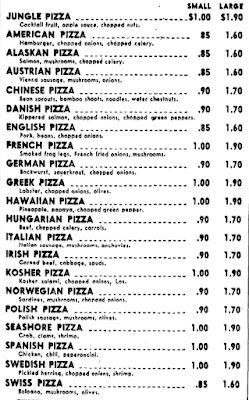 In the Oregonian (OR), February 7, 1957, they had another advertisement, this time which added a menu, showing all of their international and creative pizzas. What an innovative list of pizza topping combinations! Jungle Pizza, Chinese Pizza, Danish Pizza, Hungarian Pizza, Spanish Pizza, Swedish Pizza, and much more. A French Pizza with frog legs, a Jungle Pizza with cocktail fruit, an English Pizza with pork and beans.
One of those selections was also a Hawaiian Pizza, topped with pineapple, papaya, and chopped green pepper. This is the oldest reference I've found to the use of the term, Hawaiian Pizza, predating Sam's alleged invention by five years. Unfortunately, the restaurant only lasted a few months, at least into May. As pineapple pizza existed before 1957, it's certainly possible that another restaurant also referred to it as Hawaiian pizza but I haven't seen any evidence of such yet.
This wasn't the only mention of Hawaiian Pizza which predated Panopoulos's alleged invention in 1962.
In the Honolulu Star-Bulletin, February 12, 1958, there was a recipe for Pineapple Pizza Snacks, which used a biscuit mix in a pizza pan, as a base, and then topped it with ham, mustard, pineapple, and a sprinkling of Parmesan. We see another pairing of pineapple and a pork product, ham this time. This recipe would also be reprinted in a newspaper in Indiana.
The first recipe booklet. The Los Angeles Times (CA), March 12, 1958, reported that a new recipe booklet was available, Cookbook “Pizza and Other Italian Favorites”, Lesson 4 in Marian Manners new 1958 series of Times College of Cookery recipe leaflets. This five-page collection included a recipe for Pineapple Pizza.

I was intrigued by an advertisement in the Courier-News (NJ), March 20, 1958, for the Mutual Super Markets, which offered a Pineapple Pizza Cake. Unfortunately, no description was given for this fascinating treat.
The Quad City Times (IA), September 24, 1958, printed a recipe for Hawaiian Dessert Pizza, which included pineapple. That same recipe was also published in a number of other newspapers, across the country, including Mississippi, Ohio, Idaho, Pennsylvania, Florida, Indiana, Georgia, and Michigan. Yes, this was a dessert pizza rather than a savory one, but it still used the name and was still pineapple atop pizza.

The Philadelphia Inquirer (PA), August 23, 1959, mentioned a snack of "Hawaiian Pizza," although no description was provided, so it's unclear whether it referred to a savory or dessert pizza.

Another dessert pizza recipe. The Monroe News-Star (LA), October 7, 1959, also had a recipe for Hawaiian Pizza, but it was a different recipe from the one published in 1958.

Locally, the Boston Daily Record, February 17, 1961, had an advertisement for the Desert Lounge, in Roxbury, noting that Italian cuisine was their speciality. In addition, they boasted, “First time Anywhere. Irish, Jewish, Hawaiian Pizza.” So, Hawaiian Pizza was available in Boston the year before its alleged invention by Panopoulos in 1962.

The St. Louis Post-Dispatch (MO), October 12, 1961, presented an ad for Bettendorf Rapp; mentioning that at their in-store bake shop, they sold Pineapple Cheese Pizza, for 65 cents each, and noted it is “A delight for After-school snacks.”

Finally, and which opens up more of a mystery, is the Arizona Republic (AZ), February 18, 1962, which briefly mentioned, “But differentness, itself, is the specialty of a few Phoenix places. How else can a café justify the slogan ‘Home of the Pineapple Pizza?” The article failed to mention the name of this cafe, and I currently haven't been able to locate any more information about it. Could Arizona have been the first place to serve pineapple pizza?