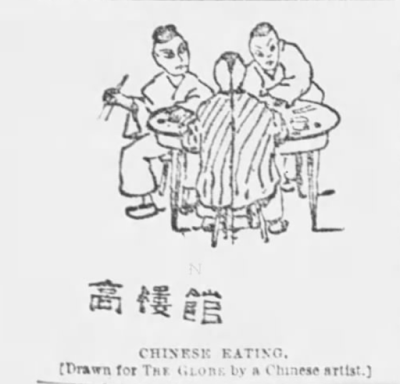 "The most interesting feature of Chinese life to me was that on board their boats, or sampans, as they are called....Upon these boats live whole families of three and even four generations."
--The Fall River Daily Herald, November 20, 1888
As I've mentioned previously, I've a new writing gig, contributing to Sampan, the only bilingual Chinese-English newspaper in New England. I've previously written twenty-one articles for Sampan, including:
In Search of the First Chinese Restaurant in Chinatown
Malden’s First Chinese Restaurant
Quincy's First Chinese Restaurants
Ruby Foo, Chinatown’s First Woman Restaurateur (Part 1)
Ruby Foo, Chinatown’s First Woman Restaurateur (Part 2).
Anita Chue: Another Influential Woman Restaurateur in Chinatown
Celebrate World Baijiu Day
Mary Yick, A Chinatown Pioneer Who Fought Discrimination
Bella Long, The Original Queen of Chinatown
A Restaurant Review of Viet Citron
The First Chinese Person To Live In Boston
Chinese Restaurant Finances in the 1920
Ar-Showe: A Wealthy Chinese Tea Seller
Peking Duck Delights & Some History
A Boston Origin of Duck Sauce?
The 150th Anniversary of Chinese New Year in Massachusetts
Sam Wah Kee: Chinatown's Wealthy Merchant Turned Fugitive
Blob Joints: A History of Dim Sum in the U.S.
The First Attempt to Eradicate Chinatown
Soall Viet Kitchen--A Bright & Tasty Spot in Beverly
Peruvian Taste & Chifa: Peruvian/Chinese Fusion
My newest article, Moy Auk: Band Leader & Famed Chef, is now available in the new issue of Sampan. During the late 1880s, one of the first, and most famous, restaurants in Boston’s Chinatown was owned by Moy Auk, who also led a famous Chinese musical band. His restaurant was referred to as the "Delmonico's” of Chinatown. At this time, Delmonico's, in Manhattan, was considered one of the finest restaurants in the country so this was very high praise. Unfortunately, that restaurant, despite its renown, didn't last long as Moy's true passion was music. Read all about Moy Auk in my latest article.
I'm currently working on a new article for the Sampan.
What is a "sampan?" The newspaper's site states, "A sampan is a popular river boat in traditional China. This small but useful vessel, by transporting cargo from large boats to the village ports, creates a channel of communication among villages." And like that type of boat, Sampan delivers news and information all across New England, and "acts a bridge between Asian American community organizations and individuals in the Greater Boston area."

Posted by Richard Auffrey at 9:40 AM