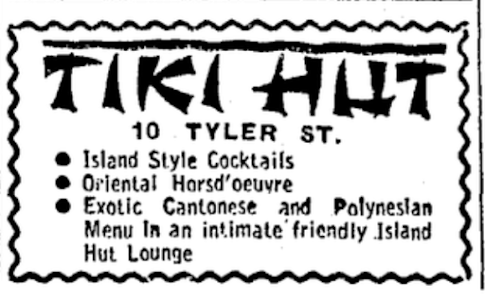 "The most interesting feature of Chinese life to me was that on board their boats, or sampans, as they are called....Upon these boats live whole families of three and even four generations."--The Fall River Daily Herald, November 20, 1888

As I mentioned previously, I have a new writing gig, contributing to Sampan, the only bilingual Chinese-English newspaper in New England. I've previously written seven articles for Sampan, including:
In Search of the First Chinese Restaurant in Chinatown
Malden’s First Chinese Restaurant
Quincy's First Chinese Restaurants
Ruby Foo, Chinatown’s First Woman Restaurateur (Part 1)
Ruby Foo, Chinatown’s First Woman Restaurateur (Part 2).
Anita Chue: Another Influential Woman Restaurateur in Chinatown
Celebrate World Baijiu Day
My newest article, Mary Yick: A Chinatown Pioneer Who Fought Discrimination, is now available in the new issue of Sampan. From restaurant owner to blackjack dealer, Mary Yick, like Ruby Foo and Anita Chue, was another pioneering women in the Chinatown restaurant industry, owning the Tiki Hut restaurant on Tyler Street. Like the other two women, Mary Yick was very popular, especially with the theatrical industry, and was affectionately as "The Dragon Lady."
Unfortunately, Mary might have fallen victim to sex discrimination, eventually leading her to sell her famed restaurant. After the sale, Mary went on a tour around the world, finally choosing to settle in Las Vegas, where she became a blackjack dealer, a vastly different job from running a restaurant. Like Ruby Foo and Anita Chue, Mary Yick was an intelligent, charming and savvy business woman who became a success in the restaurant industry, and introduced many people to the wonders of Chinese cuisine, especially Cantonese. Her restaurant career ended too shortly,. A tragedy in its own right.
Check out my new article in the Sampan for more information on Mary Yick. I'm currently working on a new article for the next issue of Sampan, which will be published next month.