Dominio Fournier: Bring On The Tempranillo

A taste of Spain! Spain has a special place in my heart and I treasure each of the visits I've made to this fascinating and diverse country. I love their wines, from Sherry to Cava, Rioja to Albarino, and their wines pair well with a wide variety of foods. You can find excellent value wines as well as amazing high-end wines.
I received a couple of media samples of Spanish wine, produced by the Dominio Fournier winery in Ribera del Duero, which was acquired by Gonzalez Byass in April 2019. Dominio Fournier, located in Burgos, was founded in 1960 though its winery wasn't completed until 1979. Their high-altitude vineyard, La Finca El Pina, is situated at about 820 meters above sea level, and consists of about 80 hectares, 50 which are planted with vines and those vines are separated into 22 different parcels. The average age of the vines are from 30-70 years.
In April 2019, Gonzalez Byass acquired Dominio Fournier winery in Ribera del Duero; Located in Berlanga de Roa (Burgos), founded in 1960; the winery was built in 1979. La Finca El Pina, on alluvial soil,  is found between the town of La Horra and Roa de Duero, and has 80 hectares, 50 of which are vineyards with an average age of 30-70 years. The winery has two female winemakers, Marian Santamaría and Laura Terrazas Rodriguez. Marian has worked  in numerous wine regions across Spain and Laura once worked for the Regulatory Board of the Ribera del Duero D.O., as well as a number of wineries in the region. 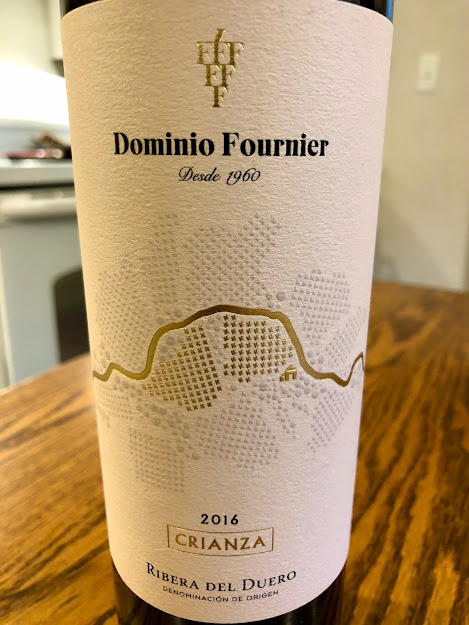 The 2016 Dominio Fournier Crianza ($30), is produced from 100% Tinta del Pais, which is another term for Tempranillo, and this is the first release of this wine. The average age of the grapes in this wine are 25 years, with a portion that are over 60 years old. It was fermented in stainless steel and wooden vats, and aged in French oak barrels for at least 12 months. With a 14.5% ABV, this wine had a dark red, nearly black, color with a bold aroma of black fruit and spice notes. On the palate, it was full bodied with restrained tannins, and delightful flavors of ripe plum, black berry, spicy hints (especially on the finish), and a touch of vanilla. A long, lingering finish, plenty of complexity, and simply a delicious wine. I paired the wine with lamb chops and it was an excellent pairing. Definitely recommended. 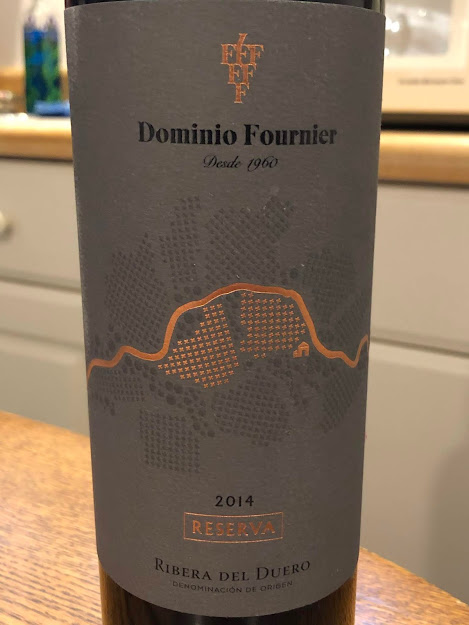 The 2014 Dominio Fournier Reserva ($50) is also made from 100% Tinta del Pais, and this was also the first vintage released. It was fermented in stainless steel and wooden vats, and aged in French oak barrels for at least 18 months. The 2014 vintage was rated Excellent.With a 15% ABV, this wine had a dark red, nearly black, color with an intriguing aroma of black fruit, intense spice, and a touch of smokiness. On the palate, it was a powerful wine, yet with restraint, as the tannins weren't overpowering and it possessed a complex and concentrated melange of flavors, including plum, black berry, dark spices, a little earthiness, and more. Well-balanced, a lengthy, satisfying finish, and nice acidity. This is a wine best paired with a juicy steak, or similar hearty dish. This is a high-end wine that is well worth the price and earns my highest recommendation.
Posted by Richard Auffrey at 10:52 AM