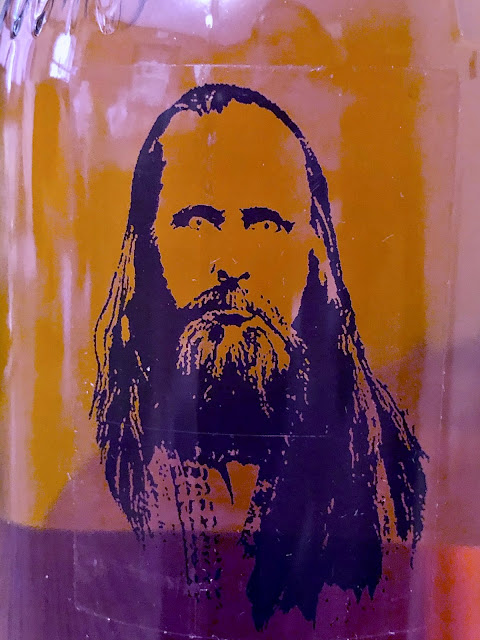 This scary looking guy, who reminds me a bit of of Charlie Manson, is Orrin Porter Rockwell, a Western lawman and Mormon, who was known as the "Destroying Angel." Although he spent much of his life in Utah, he was born in Belchertown, Massachusetts. When he was 16 years old, he was baptized into a church that later became the Church of Jesus Christ of Latter-day Saints. In 1840, Rockwell became a Deputy Marshall of Great Salt Lake City, and he also chose to never cut his hair or beard. His life was controversial, and it's claimed he killed a significant number of outlaws, many more than some more famous Western lawmen.
Porter's image, made to resemble a Western wanted poster, is on bottles in the Porter Whiskey portfolio, produced by Ogden's Own Distillery. Porter Whiskey includes several different products, including Porter Peach, Porter Huckleberry, Porter Apple, Porter's Fire, the new Peanut Butter Whiskey, and Porter's Small Batch Rye Whiskey. The first five products are a blend of Canadian whiskey and other flavorings. I received a media sample of their Small Batch Rye Whiskey, which is not made from Canadian whiskey.
"From the late 1800's to the mid 1900's setting foot off of the train in Ogden was often a life changing experience for a transcontinental rail traveler. The train station sat as the root of the infamous Two-bit Street. "Any man's desire fulfilled for two bits." Two-bit/25th Street was a hedonist's paradise. With no trouble from the law, a man could gamble, drink bootleg liquor, spend time with an unfamiliar lady, smoke opium, or befall a worse fate."
--From the Ogden's Own Distillery website
Ogden's Own Distillery was established in 2009, making it the first licensed distillery in Ogden since the 19th century, and their first product was the Underground Herbal Spirit, a liqueur that contains 33 herbs and flavors. From the beginning, they cherished a connection to Utah's historic past, as well as having a sense of humor. Their next product, which garnered some controversy, was Five Wives Vodka, which teased about Utah's history of polygamy. They also produce Gin, under the Madam Pattirini brand, as well as the Porter whiskies. Earlier this year, Ogden's opened a new and much larger distillery facility, about 32,000 square feet, which should allow for an impressive 10-fold increase in production. 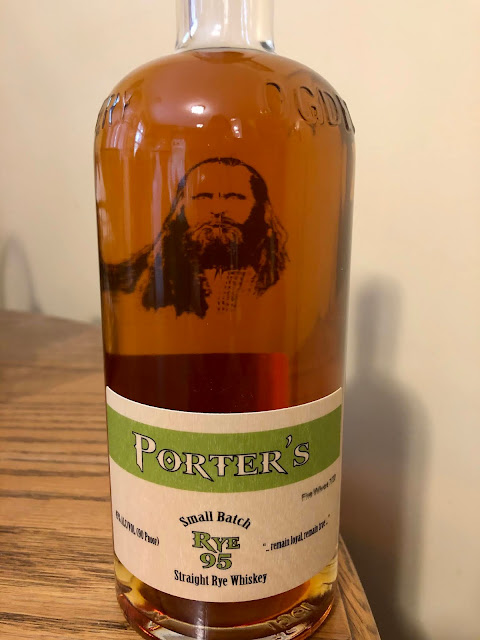 Porter’s Small Batch Rye Whiskey (about $39.95) is made from a mashbill of 95% rye and 5% malted barley. The rye is sourced from MGP, in Indiana, where the finished distillate also spends a year of aging. When the distillate is sent to Utah, it spends another three to four years aging, at 111 proof, in heavily-charred, new American white oak barrels. When the aging is complete, it is blended down to 90 proof. This Rye was first launched in 2019, when about 1000 cases were released, and it remains a small production, though the new distillery could lead to a larger production next year.

On the nose, this Rye has that spicy edge you seek if you love Rye, accompanied by more subtle elements of herbs and toasted notes. On the palate, the spicy aspect is bold, with plenty of peppery notes as well as baking spices. There is some complexity to its flavors though, with intriguing herbal notes, berry flavors, and a hint of chocolate. Each sip seems to bring something new, though subtle, to your palate. It has a bit of heat to it, a fairly lengthy finish, and some bitter notes on the finish.

It's definitely a young whiskey, and it could probably benefit from more aging. As such, I think it's best used in cocktails, rather than sipped on its own, and would make a fine Manhattan, one of my favorite Rye Whiskey cocktails.

Posted by Richard Auffrey at 7:36 AM