Origins of the Pu-Pu Platter 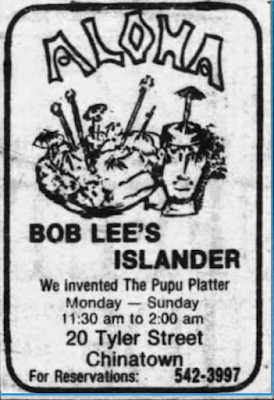 In an advertisement in the Boston Globe, October 14, 1982, Bob Lee's Islander restaurant claimed "We invented The Pupu Platter.” Is this true?

According to Wikipedia, "The pupu platter was probably first introduced to restaurants on the United States mainland by Donn Beach in 1934." In addition, it notes, "The earliest known print reference to a pupu platter served at a Chinese restaurant is from 1969." Are either of those true?

What's the actual truth behind the origins of the Pu-Pu Platter?

There’s no question that the term “Pu-Pu” derives from the Hawaiian word, pū-pū, which refers to “appetizers.” Originally, pū-pū only referred to shellfish, but eventually expanded to a variety of other foods as well.

During the 1950s, a number of Hawaiian newspapers mentioned pu-pu. For example, the Honolulu Star-Bulletin (HI), April 10, 1954, in describing the Ginza restaurant on Honolulu, stated, “.., there’s a tempting array of pupu—LOVE that word!—chasers in the form of shrimp tempura, sashimi, abalone, and umpteen varieties of Japanese pickles and vegetables.”

The Honolulu Advertiser (HI), January 22, 1955, detailed Les Gourmets de Pupu. The article stated, “Believing that one way to eliminate the problem of dinner is to concentrate exclusively on hors d’oeuvres, a group of dedicated young couples formed one of Honolulu’s most unusual clubs several years ago.” The article continued, “They hold that dinner uses up space, confuse the issue and adds dishes to wash.” The group held monthly epicurean dinners, specializing in pupus, “the Hawaiian approximation for hors d’oeuvres.”
Travel back about twenty years, and in 1933, Don’s Beachcomber, likely the first Polynesian “Tiki” bar, opened in Hollywood, and in 1937, the bar moved across the street and became a restaurant as well. Around this same time, Victor Bergeron Jr. opened his own Polynesian bar & restaurant which would become known as Trader Vic’s.

It would seem to make sense that maybe one of these restaurants, which popularized Polynesian-Chinese cuisines, invented Pu-Pu platters, using the Hawaiian word to refer to their own collection of appetizers. If they did so, when did that occur? Was it when they first opened or was it sometime later?
Tthe evidence on behalf of Don the Beachcomber being the first to create a Pu-Pu Platter seems to be lacking. For example, I’ve examined three menus from Don the Beachcomber, from 1954-1965 (Menu 1, Menu 2, and Menu 3), and there was not a single mention of Pu-Pu Platters, which makes no sense if Don invented it
As for Trader Vic's, he wrote a book, Trader Vic's Book of Food and Drink (1946) and it doesn't mention the Pu-Pu Platter either. However, there's a Menu from the 1950s (although a specific year is not mentioned) for their Honolulu location, and it had a category for Hot Pupus: Polynesian Hors d'Oeuvres. There was also a listing for PuPu Platter ($2.50), with Fried Shrimp, Egg Roll, Won Ton and Spareribs.
As such, this might be the first restaurant documented to have served a Pu-Pu Platter, and provides at least some evidence that Trader Vic's might have invented the Pu-Pu Platter. I'll note though that it doesn't appear that Trader Vic's has made that claim for themselves. Trader Vic's has claimed to have invented the Mai Tai, so why wouldn't they make that same claim for the Pu-Pu Platter if it was applicable?
In 1957, a couple locations of the Luau 400, a Polynesian restaurant opened in New York City and Pennsylvania. The Daily News (NY), December 5, 1957, mentioned that the menu at Luau 400 included a Pu Pu Platter, with Tim Sam (dumplings), Shrimp Vela (fried shrimp with coconut), Egg Rolls, Barbecued Spare Ribs, and Rumaki. This might be the first newspaper mention of a restaurant serving a Pu-Pu Platter.
As the Trader Vic's menu doesn't have a specific year, it is certainly possible that Luau 400 was the first restaurant to offer a Pu-Pu Platter and that Trader Vic's followed closely behind them, starting to offer a Pu-Pu Platter in 1958 or 1959.

So what about the claim of Boston's Bob Lee's Islander? Around 1951, Bob Lee, a native of Canton, China, opened Bob Lee's Lantern House on Tyler Street in Boston's Chinatown. At first, it only had seven tables, although it would grow over the years, with its first expansion starting around April 1952. At that time, the restaurant served only typical Cantonese cuisine.

It wouldn't be until 1961, that Bob Lee's Lantern would add Polynesian cuisine and cocktails. The Boston Daily Record, January 2, 1961 noted the opening of the new Aloha cocktail lounge at Bob Lee’s Lantern House. The Boston American, May 15, 1961, mentioned that at this new Aloha lounge, you could find "tasty Polynesian-Chinese food and cocktails." 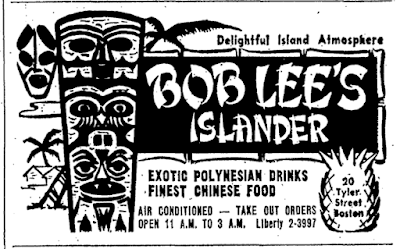 By September 1961, the name of the restaurant was changed to Bob Lee's Islander, embracing the Tiki mystique. The Boston American, September 18, 1961, had an advertisement for this name change, noting they served “Exotic Polynesian Drinks, Finest Chinese Food."

The Boston Record American, December 20, 1961, had a full page advertisement for the restaurant, noting that the decor included:“Thatched roofs, Polynesian masks, ceramic figures and symbols, lush broadleaved foliage and a handsome tropical mural..” One of the items you could order were the “intriguing Pu-Pu Platters heaped with shrimp puffs, fried won-ton, rumaki, barbecued spare ribs, fried shrimp and barbecued chicken wings,..”

It's important to note that at this time, Bob Lee's Islander didn't claim to be the inventor of the Pu-Pu Platter, which you would have expected them to have done if it were true. They had a full page advertisement, so plenty of room to add that information if it were correct. However, we have already seen there were Pu-Pu Platters at least as far back as the 1950s, before Bob Lee could have invented it in 1961.
During the 1970s, Bob Lee ran into some legal problems. First, in late 1976 and early 1977, his restaurant had been found in violation of the health codes and was shut down for a day. According to the Boston Globe, February 9, 1977, he then planned to sue the city for violating his civil rights. He stated that three other restaurants which had also failed health inspections, Anthony’s Pier 4, Locke-Ober and Polcari's, had only been given warnings. His was the only restaurant shut down. He also claimed this was the restaurant's first violation in its 25 years. However, because of the public nature of the health allegations, Bob Lee also stated he had lost much business.

A year later, the Boston Globe, April 11, 1978, reported that Bob Lee had been charged with 3 counts of tax evasion for understating his taxable earnings by $158,680 from 1971-1973. The Boston Globe, May 10, 1978, then reported that Bob pled guilty to 1 count of tax evasion. He was sentenced to one year in jail, three months to serve and the rest suspended. Plus, he was fined $10,000 and had to pay the  back taxes, plus 6% interest and a fraud penalty of 50% of the overdue taxes.
It wasn't until 1982 (in the ad at the top of this page) that Bob Lee's Islander made their first documented claim to have been the inventor of the Pu-Pu Platter. Why did they wait so long, at least twenty years, to make this claim? Why isn't there any earlier documented references to their alleged invention? And as Ive already pointed out, Bob Lee's Islander didn't exist until 1961, and there were  documented references to Pu-Pu platters in the 1950s. So their claim cannot be true.


At this time, the first documented references to Pu-Pu Platters were from the 1950s, including a Trader Vic's menu and a 1957 newspaper article about the Luau 400. From 1961 through the early 1960s, other restaurants, in New Jersey, Vermont and Hawaii, would also start offering Pu-Pu Platters (including the flaming Pu-Pu Platter.
More research would be beneficial to seek the actual inventor of the Pu-Pu Platter, but we can at least state definitively it wasn't Bob Lee and it seems very unlikely that it was Don’s Beachcomber either. Trader Vic's and Luau 400 are in the running as potential inventors, but more evidence would be needed to determine the fact of the matter.
Posted by Richard Auffrey at 3:00 AM

As I had mentioned, I first had the Pu Pu Platter at Trader Vics, Hilton in Washington DC in the late 60s. However, I believe it had been on their menu since they opened in 1961.