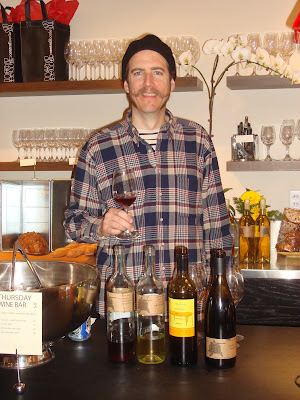 As I mentioned yesterday, I recently went to the Wine Bar at Central Bottle and Carl Sutton of Sutton Cellars was their special guest wine maker. Carl had also been on Skype during the Central Bottle grand opening and I had got to ask him a few questions then. I am a big fan of his wines and you can read my prior reviews of his Rattlesnake Rose, Carignane, and Syrah. Carl produces artisan, low-production wines which are absolutely delicious and very reasonably priced.

I was fortunate to spend some time chatting with Carl at the Wine Bar. As I have said before, he is easy going, down-to-earth and passionate about his wines. He is the type of guy you would like to hang out with, drinking wine and having fun. You can't help but like him.

Carl has started bottling his Rattlesnake Rose with a crown cap, which looks like a bottle cap you would see on a beer bottle. I had to ask him about that as it was so unusual. Carl stated that the cap was more efficient and cheaper. A cork costs about 25 cents but the cap only costs 1/2 a cent. That can lead to a significant savings. This cap is actually known as a tirage cap, and used to seal champagne bottles while they age before disgorgement. There are also some Austrian Gruner Veltliners that are sealed with these caps. These caps should not cause any problems with aging either.

Will these caps be the wave of the future? 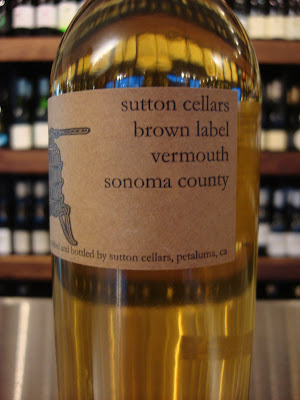 I also got to taste Carl's new White Vermouth ($20), and Boston is only the second market to see this release, the first being San Francisco. I think many people don't quite understand vermouth but they should learn more about it. Especially when artisan vermouths like Carl's exist.

Vermouth is a fortified wine that has been flavored with aromatic herbs and spices. It is also known as an "aromatized wine." Similar products have existed since ancient times but it acquired its name, and initial commercial success, in Italy during the late eighteenth century. In 1786, Antonio Benedetto Carpano, of Turin, Italy, coined the term "vermouth" because he was inspired a German wine flavored with wormwood. The German word "wermuth" means "wormwood."
There are three basic styles of vermouth: extra dry, dry (white), and sweet (red). The earliest vermouths were all sweet and it was not until the early 19th century that the French invented dry vermouth. Thus, red vermouths are sometimes called Italian vermouths and white vermouths called French vermouths, though both countries now make red and white vermouths. There are a few other rarer varieties including a rosé vermouth and strawberry-flavored vermouth.
There is no specific recipe for creating vermouth. There are easily over forty herbs, roots and flavorings which might be added to any particular recipe. Some include camomille, cinnamon, citrus peel, cloves, coriander, ginger, juniper, nutmeg, quinine, and sage. Vermouth makers often jealously guard their recipes.

Vermouth is mostly used in cocktails, helping to reduce the alcohol content as well as adding an herbal component. During the end of the nineteenth and beginning of the twentieth century, vermouth was frequently used in the U.S. in cocktails, such as martinis and Manhattans. But, around the time of the Second World War, vermouth started falling out of favor. The demand for dry martinis increased and vermouth became neglected.
But there are now delicious artisan vermouths, which can enhance cocktails or even stand on their own. It is time for people to revisit vermouth, and to experience what it can do for them. And a good place to start is with Carl Sutton's White Vermouth.
Carl's vermouth was inspired in part by the Italian Amaro, a herbal liquer. His vermouth contains 17 ingredients besides white wine, and he would only tell me that two of the ingredients were camomille and dried orange peel. Others include various herbs, barks and roots, nearly all purchased from the Rainbow Coop except for one which comes from the land near his winery.
Carl had to get his vermouth recipe approved and all of the ingredients were supposed to be on the GRAS (Generally Recognized As Safe) list. But one of his ingredients was not there so he needed to get special approval to use it. He could go through an FDA approval, which would be very lengthy and costly. Or he could provide a book reference, from before the 1950s, noting the use of the ingredient in a culinary manner. Fortunately, he found two references, one as a leaf and one as a root, and received his approval.
It took plenty of experimentation for Carl to get his vermouth as desired. The timing of the infusion was very important to the end flavor of the product. Eventually, he determined the best way was to first produce the wine, then fortify it and finally then do the infusion. It was difficult as there is little written about how to make vermouth, and producers keep their methods and processes secret.
At the Wine Bar, Carl made vermouth and club soda, with a bit of lime. And it was delicious, clean, light and with a fine herbal taste. This is certainly something which would benefit either a cocktail or is fine on its own. It seems like it would be very versatile and maybe we shall see a return to using it more often in martinis and other drinks. Many of the others who tasted the vermouth also were impressed.
Carl has produced another hit and I was sure to pick up a couple bottles. It did not take me long to open a bottle at home and enjoy more of the vermouth. I think I may need to get more fairly soon. Central Bottle is one of the few places where this vermouth will be available so stop by there and check it out.
Later this year, Carl may release a red, sweet vermouth. I look forward to it and expect it will be equally as good.
Posted by Richard Auffrey at 6:00 AM

I met Carl at a winner dinner at the late, lamented Zander Cafe in St.Paul five or six years ago and became a big fan. The following year I had the pleasure of visiting him at a crush in Sonoma. I sort of lost track of him after moving to Washington (the state) in 2007 but I'm glad to hear he's as creative as ever.He's one of the brightest young winemakers around.

Agreed. And I love his vermouth. Can't wait to taste his new one when it comes out.