Goodbye Sarah: You Will Be Missed 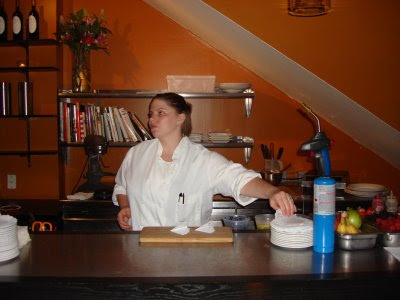 In the summer of 2008, the esteemed Troquet Restaurant opened La Patissier, a desserterie on their lower level.  They hired Pastry Chef Sarah Woodfine, formerly of The White Barn Inn in Kennebunkport, to run La Patissier.  From the beginning, I was quite a fan of Sarah's desserts, especially her souffles. In both 2008 and 2009, La Patissier was ranked as my Favorite Desserterie, and it probably will be awarded that designation again this year.

Unfortunately, as of this past Saturday, Sarah is no longer working at La Patissier as her husband was promoted to a job out of state, so Sarah had to leave with him.  I will sorely miss her, and her exceptional desserts.  She was personable, creative and very talented. When you went to La Patissier, you would almost always see Sarah behind the counter, working hard at preparing desserts.  Everything was hand made, including the pastries, ice creams and sauces.  The menu changed frequently, depending upon what is in season, though a few items were standards that always remained.

Yet it remained more of a hidden treasure, under the radar of many people.  Sarah certainly did not get enough appreciation in the media.  Instead, some of the same old dessert places got the press, places with much less creativity and taste than La Patissier. I know that I never had a bad experience at La Patissier, and usually the desserts were superb.  Many times, I ate dinner elsewhere in Boston and then adjourned to La Patissier for dessert.  Because of that, I was always quick to recommend La Patissier to anyone who would listen.  You will find numerous reviews and mentions of it on my blog. 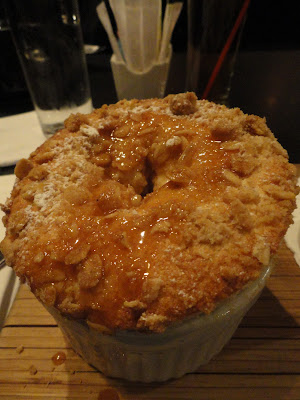 This past Friday, I had my last dessert at La Patissier, an apple souffle with Bourbon caramel sauce, which was exceptional, as usual.  It seems especially poetic that the first souffle I ever had at La Patissier, back in September 2008, was an apple souffle. Since then, I have enjoyed a variety of souffles, including chocolate, blueberry and candied pecan.  They were always light, fluffy and flavorful, accompanied by a tasty sauce and scoop of home made ice cream.  Those memories will remain dear to me.

I wish Sarah the best of luck in her new life, and to know that she brought gustatory delights to many.  Her efforts were greatly appreciated and she is a truly skilled pastry chef, and an overall nice person.  If you have any memories of Sarah, feel free to add them in the comments.

La Patissier will continue at Troquet, and we shall see how their new pastry chef does in the times to come.
Posted by Richard Auffrey at 2:00 AM